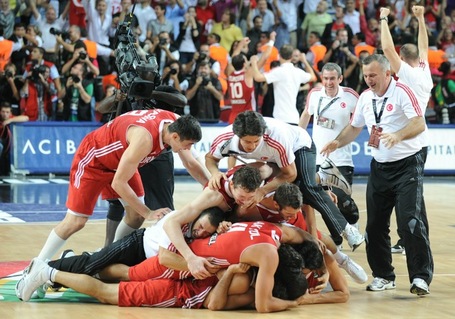 Okay, so Lithuania wasn't seriously threatening in the fourth quarter, but they were a couple made threes away from making that a game. And there's no way that you can deny that the Serbia-Turkey game was intense, as Turkey had a storybook finish in front of their home crowd. They secured their first world tournament medal finish ever, and only Team USA stands in the way of that medal being gold. But before we get to what's going to happen tomorrow, let's break down what happened today....

The first quarter was all Team USA. Lithuania scored pretty well early on, hitting a few key threes. But after being up 11-9, Lithuania would run into a Team USA run, which consisted mostly of Team USA getting to the line on a consistent basis. Lithuania struggled to get any ball movement going. By the end of the quarter, Team USA was up by 10.

The second quarter was the same story. There were a few mini-runs by both teams as Lithuania managed to get some fast breaks going. But by the end of the quarter, Team USA was extending their lead again. They continued to penetrate Lithuania inside, and Lithuania couldn't get anything going at their end, as they were relying on mostly non-scoring big men to get something going inside. Personally, I was wondering why they weren't shooting more three pointers, which was their strong suit in their last game against Argentina.

The Third Quarter was where Lithuania started to show a little bit of fight. They finally shot a few threes, and managed to get it to within 10, on a remarkable play where Derrick Rose missed a dunk, and it was taken to the other end where Lithuania hit an open three. But, after that, Team USA went on a 7-0 run, with KD hitting a wide open three and Derrick Rose having a rather impressive dunk. But Lithuania charged right back with some good transition offense, and some excellent sharpshooting from 3 Point Land. When it was all said and done, Lithuania had scored 1 point less in this quarter than they had in the entire first half.

Below: Lithuania Valiantly Fights in the Fourth, Serbia-Turkey comes down to the wire.

In the fourth, Lithuania was consistently knocking on Team USA's door. They were hovering around 10 points for so throughout the beginning of the fourth, and you could see the energy in their game. They were hitting some well-contested threes, and getting some miracle plays inside. (A one handed dunk?) But Kevin Durant and Team USA did a good job of never letting them go on a run. And once Lithuania had cooled off, the fate of the game was all but sealed. It was a valiant effort, but Team USA had the better talent, and the better game plan. Kevin Durant had 38 points, a single game record for a Team USA member in any World Championship, along with 9 Rebounds. Russell Westbrook had 12 Points, 7 Rebounds, and 3 Assists.

Serbia got off to a great start against Turkey. They continually penetrated the Turkish defense with great post play by Krstic and Velijkovic and good cuts to the hoop by Teodosic. Eventually, they were out to a 15 to 8 lead. But Turkey went on a 7 point run of their own, tying it with a Turkoglu three. The quarter finished at 20 to 17.

Because of Turkey continuing to make stupid mistakes while going for home run plays, Serbia managed to keep their lead for most of the second quarter. Turkey did manage to get to within one at the halfway point, but because of more bad turnovers and missed layups by Turkey, Serbia managed to expand their lead to 8. Turkey put it back down to 2 at one point, but through getting fouled, Serbia managed to expand it back to 6 by the half. Every time that Turkey got close to getting a good lead, they always seemed to commit a bad mistake or miss an easy shot and let Serbia take advantage again. That's not to say that Serbia doesn't deserve the lead that they were taking though, as they were consistently working for good shots, and Kasel was playing his best game of the tournament.

In the third quarter, Turkey finally almost moved the mountain by tieing it at 46, but a couple threes and a nice two later, Serbia was back up by 8. If you're seeing a pattern here, then you're not insane. But, slowly and surely, Turkey managed to get back within 1, down 55 to 56. But, again, they had bad shot selection at the other end of the floor, and again manged to fall behind by 5. By the end of the quarter though, they were within three, and the game seemed to be destined for a close finish.

And early in the fourth, they had their chance. After a one and one Erden trip to the free throw line and Krstic getting stripped, Turkey had the ball down by 2. And they had a wide open three, for the lead, and it was way short. And the crowd sighed, again. The quarter continued on like this, with Serbia's lead fluctuating between 8 and 2. Serbia kept finding good shots on the outside or dumped it down to Krstic, while Turkey tried to exploit mismatches with good ball movement. But then, the run finally came. With about 3 and a half minutes to go, Tunceri had the ball with Turkey only two points down. And, without a pass needed, he stood up and hit a long three in Tedosic's face. And Turkey went up by 1. Serbia ran to the other end and tried to answer with a well-contested three by Teodosic, but it was missed, Turkey got the rebound, and Omer Onan was fouled while running to the other end of the floor, and made both free throws. With Turkey up by three, both teams missed 2 three point attempts each, each attempting to make a statement near the end of the game. But with a minute and a half to go, Dusko Savonovic was fouled going to the hoop, and he made one of two free throws for Serbia, putting them down by only 1.

And from then on, it was as intense as it could get. Turkey milked the clock down to about 40 seconds, and Hedo Turkoglu had to shoot a long three with Krstic in his face. He missed it, and Serbia got the rebound. Teodosic immediately proceeded to run down the court and shoot a quick lean-in three, but it rimmed out. Keselj got the rebound and was immediately fouled, sending him to the line. He made both, putting Serbia up 80-79 with with only 28.4 seconds to go. The whole crowd held its' breath. Tuncieri ran inside of Serbias three point line, and saw Semih Erden cutting to the basket. He threw an alley-oop to Erden, and Erden flushed it in like nobodies' business. Krstic was shoved into the play by another Turkish player, and he was called for a ticky-tack foul, sending him out of the game with 5 fouls. Erden bricked the free throw, giving Serbia possession down by 1 with 16 seconds to go. Teodosic trotted up the floor. He looked for the three, but instead cut into the lane. He handed it off to Rasic, who saw a semi-open Velijkovic and passed it to him. Velijkovic barely hit it off the glass with 4.3 seconds to go.

And the arena fell nearly silent. You could barely hear a few Serbian fans, but the Turkish fans were in sheer shock. Turkey called a timeout, and moved the ball to mid-court. It was inbounded to Turkoglu in mid-stride towards the corner of the court. He was well guarded by and ran into Velijkovic. But, he made the play of the day by realizing Tunceri was guarded only laterally by Keselj. Keselj reached to foul Tunceri, but by then, he was long gone towards the hoop. He ran and made the layup heard around Turkey, putting them up by 1 and securing them the win.

Right? Wrong. There were still .5 seconds to go, as determined by the referee. Serbia called a timeout and had 1 last chance to tip it in. They inbounded it from half court. Teodosic was unguarded on the inbound, with Turkey instead opting to have 5 men inside the arc. He threw a long ball to Velijkovic, who was falling away from the far side of the hoop on the baseline. The desperation shot was up, and blocked by Semih Erden, who then fell on top of Velijkovic. No foul was called, and Turkey had won the game. Nenad Krstic finished with 15 Points and 7 Rebounds. Both teams had good scoring all around, but the king of scoring for the game was Marko Keselj with 18. Hedo Turkoglu led Turkey with 16.

And thus, after that intense game (and probably the best of the tournament), this tournament has the final that it was destined for:

Who will win? Home country or perennial champions? There's only one way to find out, and it involves tuning in to watch the game tomorrow. I'm definitely ready for an epic finish, whichever way it may swing. The question is, ARE YOU READY?!