Share All sharing options for: Rumor Mill: Seattle Strikes Back? 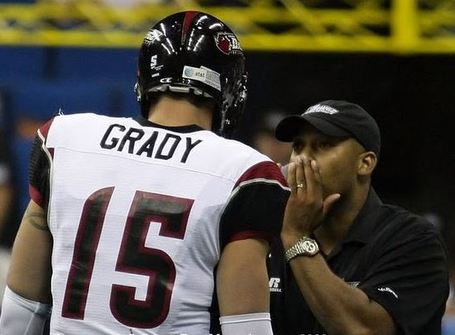 Its not quite official yet, but it seems that the city of Seattle may finally be getting its "revenge." Reports indicate that an ownership group in Seattle (known as Force 10 Hoops L.L.C.) may be purchasing the Oklahoma City Yard Dawgz, an arena football team that moved from the Arena2 league last season to form the new revitalized Arena Football League.

I'm not trying to open any old wounds here, but the incredible coincidence here was too much to be left untouched. There are a few things I notice about this potential purchase in particular. Read More Below.

When you look at the purchasing group, the first thing you notice is that they're all women. I'm not trying to say anything sexist, I think its great that women are getting more involved in the executive end of sports (not to mention that current Yard Dawgz general manager, Christie Cook, is a woman herself). However, I have to think that its exteremely unique that a team composed of males is entirely owned by a group of women. Force 10 was originally formed to purchase the Seattle Storm from Clay Bennett and keep them in Seattle. You'd think a group like this would be satisfied after that initial intended purchase was accomplished. I don't think anyone could have foreseen them buying another team.

So, this brings up the question that must be asked. Do you think the purchase of Oklahoma City's arena football team is an attempt to get back at the city for "stealing" (a word used facetiously) the Supersonics? My opinion: of course it is. Honestly, I can't think of any other motive. Its true that the Arena League is currently going through a time of expansion and relocation. Four new teams will be added for the 2011 season (Pittsburgh, Philadelphia, San Jose, and Kansas City) while at least one other team is moving to a new city (The Alabama Vipers are becoming the Georgia Force).

Knowing this, it doesn't seem too surprising that this team is happening to be moving as well. For all I know, the Yard Dawgz were one of few teams available on such short notice and Seattle is a market desperately hungry for summertime football, making the history of the two cities nothing but coincidental in the move. But why not start your own expansion team, if that's the case? A whole lot of other cities are doing it. And why purchase Oklahoma City's team?

Given the history of the group, I can only logically assume that this move (if it is confirmed) was made out of a grudge with Oklahoma City, even if their primary motive was to just to bring the arena game to a city that really likes its football.

Most of you Oklahoma City fans will probably say, "So what?! I never cared about them anyway! They can take the Barons too for all I care!" On a personal note, however, I was a Yard Dawgz season ticket holder, and this news comes as a huge hit to me. If they ever do end up leaving -- though they never were able to win a playoff game, I will miss all the good times I had with them.

So, Yard Dawgz, if I never see you again, good bye. Thanks for everything! <sob>