Share All sharing options for: New Uniforms Are Everywhere!

If you've been hiding under a non-NBA rock for the past couple of weeks, then you're unaware of the fact that several NBA teams have unleashed new uniforms. Why? Well, some would say it's because previous iterations needed updating, but I say it's because the teams need some more of that cold hard cash.

I'll deliver my opinion on each uniform below. Now, why should you take style opinions from a guy who wears headbands and tye-dye shirts on a regular basis? Well, that's because everybody will be dressing like me in 30 years. I'm ahead of the times, holmes!

First up: The Minnesota Timberwolves

The team last changed their uniforms from the classic KG Style uniforms two years ago. Their previous uniforms weren't met with welcome arms by the general public, so the management decided it was time for a bit of updating.... 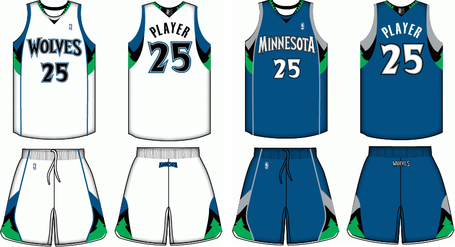 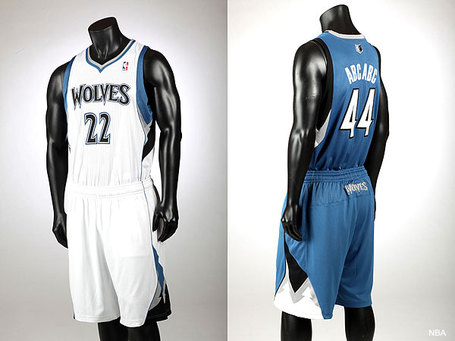 Anaylsis: What have the new uniforms done, exactly? They removed the green trees from the uniforms, and they toned down the font of the numbers. And that's about it. They changed the uniforms in response to the old ones looking a bit too "cartoony" for everyones' taste.

Opinion: These new uniforms might look acceptable for the times, but they've taken what made the Timberwolves unique and just trashed it. If I showed you these uniforms over two years ago (without the NBA logo) and asked you what team they were for, you might guess some random college or a well-endowed high school. Sure, the trees are a bit over the top, but when I think Timberwolves, I think green trees. The screaming wolf logo comes second in my mind.

Rating: C-. The uniform change had good intentions, but all it did was emphasize the Timberwolves' mediocrity.

Below: The Cavaliers, Jazz, Clippers, and Warriors!

The Cavaliers changed their uniforms for one reason, and one reason only. And if I have to tell you that reason, then you probably don't remember who Russell Westbrook is. The new post-LeBron uniforms are below.

Previous Iterations (Not that you'd remember them, only every kid on the street wore one....): 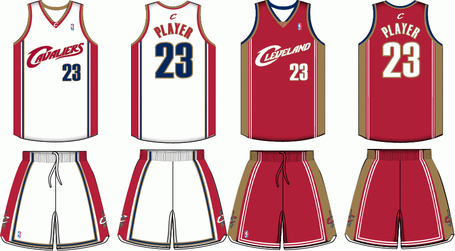 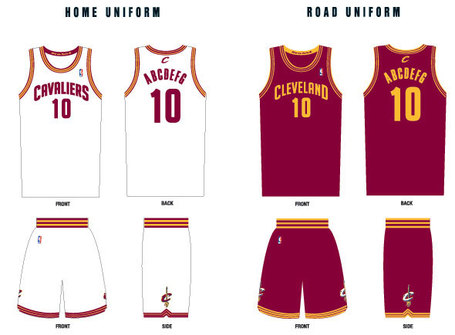 Analysis: The base colours remain the same, except for the fact that the bronze on the previous uniforms has changed into a light gold on the new ones, and that is reflected in the new logo. The sword sticking through the C on the side of the shorts remains, the C on the back of the collar is still there, and the uniforms continue to say Cleveland and Cavaliers on them. Other than that, these uniforms have been completely revamped. The side panels on the old uniforms are completely gone, as well as the stylized Cleveland font and the C at the bottom of the neckline. Almost everything has been dropped in favour of a more simplistic look, with the name and number reduced to a much more subtle font and most of the rest of the uniform being changed into plain white or wine. But the one thing that most sticks out about these uniforms are the multi-coloured bands used for the sleeves, neckline, waistline, and bottom of the shorts. The bottom of the shorts also has a small peak near the C logo.

Opinion: These uniforms look like they came straight out of the ABA, but for all of the wrong reasons. It's got all of the outrageous features of an ABA uniform in the garish colours and the ridiculous bands that are placed everywhere. But, where's the stylized font? Where's the team logo? Where's the pizazz? It's like someone asked for a uniform that goes back to the 70's, but didn't want it to be too outrageous, so they toned it down to make it look acceptable in today's NBA. And that's fine, I guess, but it's a huge step down for a team that is known for it's history ridiculous uniforms, both primary and alternate. The uniform in this link is easily my favourite.

Rating: D. They pass by the skin of their teeth because these uniforms have a slight bit of originality to them. But, in my opinion, these uniforms will only be known for one thing: The horrible loss-filled years post-LeBron James.

After a really nonsensical change to some generic looking blue and white unforms that almost look like classic Lakers uniforms, the Jazz have decided to harken back to their New Orleans roots and go back to using the old Music note. The "Mountains" logo is still used as their primary logo, but expect to see the classic music note much more often. 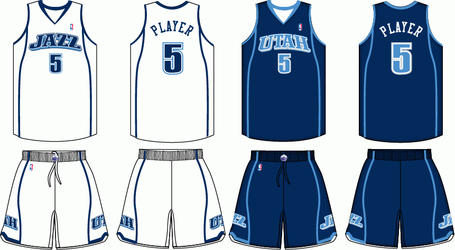 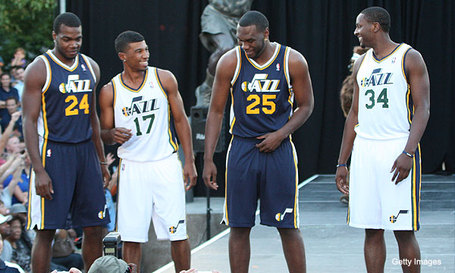 Analysis: I could go through all of the subtle changes they've made, but in actuality, all they did was completely change their uniforms back to the ones they had in the 1980s and early 1990s. The only changes from those are the removal of "Utah" on the top of the Jazz logo lettering, the addition of a stripe on the side of the jersey, and some minor colour differences.

Opinion: Anything looks better than the generic blue and white uniforms they've had for the past 7 years or so, but going back to the music note isn't necessarily the best way to go. Instead of trying to evolve their identity into something new, the Jazz have just taken the lazy route and used their old uniforms. Sure, I love the old uniforms as much as the next guy, but are they really representative of Utah? In a sense, this is like the Thunder changing their logo back to the old Seattle space needle. I like to see these uniforms thrown back to every once in a while, but I'd prefer the team to expand on their "mountain" logo or just create something new instead.

Rating: B. The uniforms are a definite improvement, but there were better and more creative routes that could have been taken.

After having the same uniform since the team came to San Diego in 1982, the Clippers decided to get extremely creative and completely change their uniform to something fresh, new, and different! Oh, wait. These are the Clippers.... 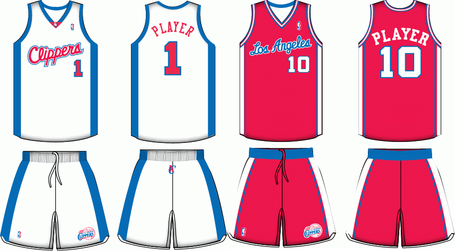 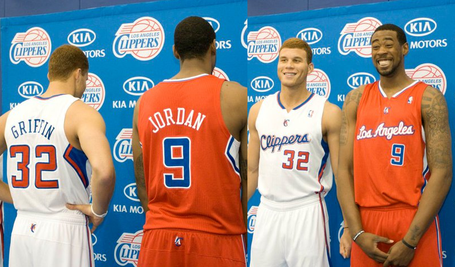 Analysis: The Clippers and Los Angeles text on the front has been moved down in order to accommodate the LAC logo. The collar looks really odd in the front now due to the moving down of the LAC logo. Instead of a stripe on the side, there is now some sort of weird blue triangle. The font of the numbers on the back is much more digital looking. And....that's about it.

Opinion: Could you get any more uncreative? These uniforms don't look any different, except for the fact that the team name/hometown text is now too low on the jersey. The uniforms just look like weird Chinese knock-offs. It's almost as if the owner said, "Hey, intern, we need a new uniform. But don't change anything at all. Draw something new when you get home tonight and we'll slap it on some new jerseys in the morning." Oh, and the Clippers changed their logo to look more "pronounced" now. And the basketball in the logo moved a bit. Big deal. New logo. Old logo.

Rating: F. Uncreative, uninspired, and just overall worse looking. Saved from an F- because I like the digital style numbers.

The Warriors are under new management, and the uniforms that were made essentially in 1997 under a long playoff drought had to go at some point. What they ended up with was this.... 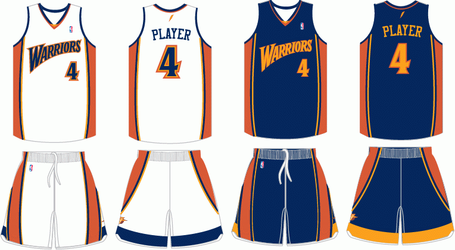 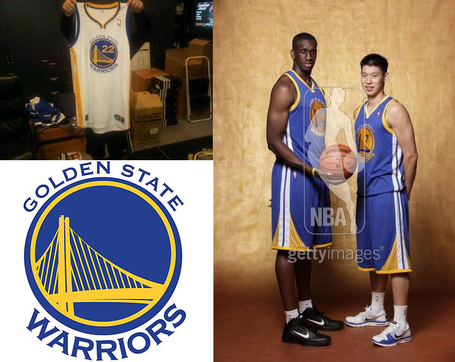 Analysis: The old design was essentially thrown out the window as the Warriors created something completely new. Well, its' not completely new, as it seems to hark back to the old "The City" uniforms, but those comparisons are flimsy, at best. The shorts are completely different, while the bay bridge is put in completely different perspective. The only thing that's really comparable to the City uniforms is the placing of the font and the presence of the bay bridge. It's the only NBA uniform to actually have the team logo on the uniform (unless you consider the Jazz's music note or the Spurs' U shaped spur to be logos). The uniform also incorporates the cables of the bay bridge on the side of the shorts.

Opinion: Sexy! Okay, so I'm a huge Warriors fan, as most of you know. So some of you may be a bit skeptical of me thinking that this is easily the best uniform change in the NBA this season. Well, to combat your skepticism, I'd argue that the Timberwolves' and Clippers' changes were far too minor to be considered the best, that the Cavaliers uniforms look too bland, and that the Jazz change was just a re-hash. Plus, I'm one of the few Warrior fans who actually liked the old uniforms, so for the new design to impress me, they must have done something right. Admittedly, the design hasn't fully come out yet, so I can't judge the uniforms fully, but the colours, the logo, and the design on the side of this uniform work out perfectly.

Rating: A-. A completely awesome turnaround of the Warriors' uniforms. The only things that keep it from an A+ are the easily tearable collar (which will be a problem on cheaper jerseys) and the font, which could be a bit more extreme.

So, what do you think? Which changed were the best? The worst? Vote in the poll and discuss in the comments below!