The Championship: Eschbach vs Tramel

Share All sharing options for: The Championship: Eschbach vs Tramel 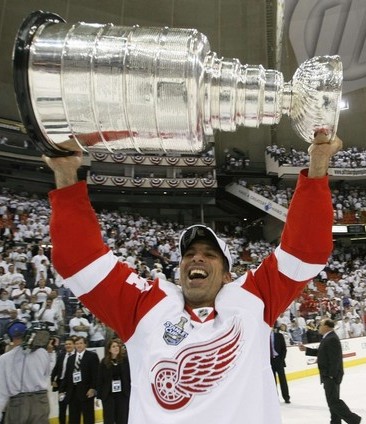 I have finally returned from my breathtaking tropical getaway. The locals hated me, my luggage was lost, and I came down with a case of dysentery the details of which may put your grandmother into cardiac arrest. But enough about me! Today is all about one thing: the championship. Al Eschbach. Berry Tramel. Both are long-time media vets, but their personalities couldn't be more different. Throw aside the rankings and all previous results. Only one thing matters now: your vote. Who will be the king of OKC???

Road to the Championship: It seems strange to say that the favorite to take home the title almost didn't survive the first round. But alas, Daniel Holdge took Eschbach down to the wire. Before coming on top by five votes within the closing hours, the security of Al's victory was very much in doubt. The only logical conclusion I could come to prior to the game was that there was a strong contingent of Eschbach and Dominance Hour haters on this blog, which seemed like a pretty safe thing to assume.

At the start of the second round, I was eager to see if the haters might finally overcome the highly seeded Al Eschbach, prompting me to say this in my Round 2 post: "I'm picking Al by a thread. It's true that the hater vote is clearly against him, but I don't think John Rohde has a big enough name to be able to pull off the upset. Don't get me wrong, I don't think Eschbach will be able to advance much further, but Eschbach is the right choice in this one. I have faith in the rationality of this blog's voters to do what is right (famous last words)."

Naturally, I couldn't have been more wrong. Al cruised to one of the largest victories of the second round against John Rohde and seemed primed for a championship run. However, there was still one standing question left in Al's way. How would he be able to contend a top-notch opponent. Nothing against Holdge or Rohde, but they aren't exactly the biggest names in the business.

The question was quickly answered in round three, where the King of the Midgets was able to squeak by with a five vote victory over KFOR sports director Bob Barry Jr. Though Al is the top-seeded personality, it almost seems like an upset to see him in the final. Nevertheless, Eschbach backers have high expectations, and nothing short of an all-out victory will appease them.

The Road to the Championship: The path to glory began with an intersectional match-up with fellow Oklahoman writer Jenni Carlson, a game which resulted in a fairly comfortable victory for the senior columnist. Though there were plenty of tougher foes he could have faced, you certainly couldn't fault him for that. After all, a victory is a victory.

Yes, a victory is a victory... except when it isn't. When facing Matt Pinto in the regional semifinals, Berry was only able to muster a tie against the sixth seed. We could have settled this tie in a number of ways... but we didn't have any good ideas, so both were allowed to advance into round two. Though this move may be seen as controversial by some readers, it was definitely the best decision. It was clear that two equal groups wanted their side to advance into the next round, so instead of making someone unhappy, why not just grant both sides their wish?

In the super-sized showdown featuring the Tramel-Pinto rematch and tournament Cinderella Myron Patton, Tram was finally able to pull ahead of his competitors. It should be noted that it wasn't exactly a commanding victory, there were more collective votes cast against Berry than for him. The polls are not intended to be a gauge of who the people want most to lose, but who they want most to win. Therefore, Tramel haters have no gripe here.