Share All sharing options for: Getting to know....Ryan Reid! 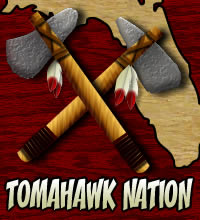 In possibly the most minor move made on draft day, the Oklahoma City Thunder acquired Ryan Reid, a forward out of Florida State. And what better way to bridge the time between now and the Summer League than a profile on this potential Thunder player?

I once again teamed up with TrueCubbie of Tomahawk Nation for a quick Q&A about Reid.

1. What type of player is Ryan Reid? His Strengths/Weaknesses?

Ryan Reid was the only Senior on a team filled with young talent. Last year was by far his most productive season, but he only averaged 6.7 points per game in 22 minutes of game play. He also pulled down 3.9 rebounds. Clearly, these numbers do not jump off the page. Some may argue that there has been a steady improvement in his numbers, but is going from 3 points to 7 points a game over a four year period really a significant improvement? Ryan Reid's biggest contribution to the team this year was his defense. In an ACC stacked with huge front court players, Ryan Reid, with some glaring exceptions, did a nice job down in the paint night in and night out. Reid is a big, physical player who is a work horse in the paint, despite what the numbers show. Like most Leonard Hamilton coached players, he gives you full effort on every play. His biggest weakness this year was likely a result of the type of team the Seminoles had on the floor: young. At times, it seemed that Reid would take shots that were unnecessary, feeling that he needed to do something as he was the Senior leader in what was at times a very stagnant offense. Overall, Reid didn't have any significant character issues and will work hard but he is not going to amaze you with his skill set. His best game was this year against Georgia Tech when he scored 17 points, pulled down 5 boards and had three steals. He also helped shut down the combination of Derrick Favors and Gani Lawal.

Below: Reactions to reactions about Ryan Reid. Favourite Ryan Reid moment? Does he have a chance in the NBA?

2. Scott Schroeder of Ridiculous Upside had this to say about Ryan Reid: "I've watched plenty of FSU games to see Isiah Swann, Toney Douglas, Solomon Alabi, and Chris Singleton over the past 3-4 years and never in the course of my viewing experience did the thought pop into my well-developed brain that Ryan Reid would ever sniff the NBA. He averaged under 7 points as a senior, with mediocre percentages for a big man, and has zero percent of developing any sort of game. He's Reggie Evans but not as strong, not as quick, and WITH LESS OFFENSIVE GAME. I can't express how much I hate that he got taken over Stanley Robinson, Scottie Reynolds,Sherron Collins and Mikhail Torrance. And me, for that matter. Should've taken me, Presti, you slime." Do you agree? Disagree? Explain.

I agree. I don't know what kind of game Scott has, but there are some other players on that list who should have been drafted before Ryan Reid. I am not trying to take a shot at Ryan as he is a good guy and never caused any problems on the team. I thought he might be invited to a camp undrafted but I didn't think this would be he potential route to an NBA team. He will likely continue to play basketball but probably not at the NBA level. I could be completely wrong. I mean Brian Scalabrine gets regular minutes, so who knows.

3. Were you surprised to see him drafted?

4. What was your favourite Ryan Reid moment? (Youtube Link if Possible/Applicable?)

I think his best game was the first game against Georgia Tech last year. However, these two moments really stand out as entertaining:

(I like this one cause Greg Paulis ended up on the floor.)

5. Do you think Ryan Reid has any chance at all of having a better career than Solomon Alabi?

No. Solomon has a better skill set and has a higher trajectory. Solomon isn't going to contribute right away, but he will eventually.

6. Which NBA player would you compare Ryan Reid to?

For some reason Etan Thomas comes to mind first, but Thomas clearly had a better pedigree coming out of college. But has that type of low post physical game. I'm not saying he has the same skills or as good a skill set, but he has that type of build and style of play. I also for some reason am thinking about Chris Richard out of Florida who played for the Bulls last year. Reid isn't as big as either of them, but you get the idea.

7. Do you think he will fit in well with the Thunder?

I don't know all of the subtleties of the Thunder's style of play to know how he'll fit in. If you need a big body in the post to give you a few minutes/fouls off the bench, then sure. He's not a run up and down the court all night kind of player though.

8. What is a best and a worst case scenario for Ryan Reid's NBA Career?

Best case, he makes it onto a team after camp and sits at the end of the bench. Realistically, it's not going to happen. D-League or Europe is likely. Again, not to take anything away from Ryan, but he wouldn't have been on my list of likely to be drafted players.

Thanks again to TrueCubbie for the profile of Reid and the earlier profile of Solomon Alabi. So, what do you think of Ryan Reid? Does he have a chance with the Thunder? Vote in the poll, post a comment!

Also be sure to check out the Thunder's profile of Ryan Reid.