Is LeBron James the Apple Inc. of Sports? | WaitingForNextYear
If LeBron is Apple and Kobe is Microsoft, then Kevin Durant is Android (exciting new kid on the block that has a long way to go), and Tim Duncan is Linux (nerdy, boring, and incredibly effective).

NBA.com - Draft 2010 - Oklahoma City Thunder
With four picks, three between 21 and 32, there are a lot of way for the Thunder to go. General manager Sam Presti can continue to stockpile talent, adding to an already deep roster of youngsters. Calculated gambles can be made on selecting players who remain overseas for a year or two.

Blazers Making A Play For Presti? | Thunder Rumblings
Furthermore, Oklahoma City already appears to be a step ahead of the Blazers in terms of the on-court product even despite entering into the rebuilding process three years prior to the Thunder. With Kevin Durant, Russell Westbrook, Jeff Green, James Harden, Serge Ibaka, Thabo Sefolosha and Eric Maynor, Presti has a stable of handpicked players, all 26 or younger, who fit his often stated desired attitude of working hard, sacrificing and playing for each other on the court while being positive role models and stand-up citizens off it.

You also could argue that the Thunder’s talent exceeds that of the Blazers, whose young stars include Brandon Roy, LaMarcus Aldridge, Greg Oden, Martell Webster, Rudy Fernandez, Jerryd Bayless and Nicolas Batum. And even though money is less of an issue for Allen in Portland, the Blazers figure to have much less flexibility in the coming years now that contract extensions for Roy and Aldridge are about to kick in. Current projections have the Blazers already over the salary cap next season, and Portland is likely to surpass the luxury tax threshold as well in 2010-11.

Add it all up and all signs point to Presti staying put. 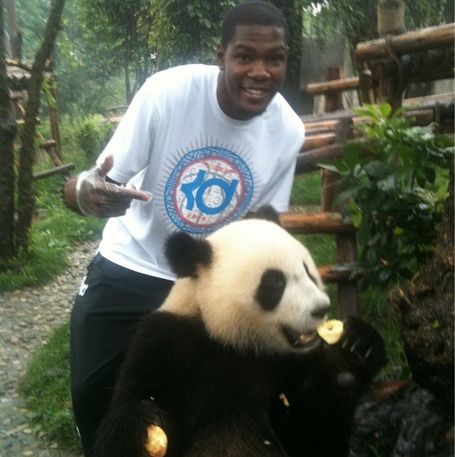 Thunder notebook: Ron Adams, Maurice Cheeks to Chicago? | NewsOK.com
Maurice Cheeks also is one of several coaches whose name has been mentioned as a possibility to round out Thibodeau's staff. No announcement is expected until after Thibodeau has completed his coaching duties with the Celtics in the NBA Finals against the Los Angeles Lakers.

Adams, the lead assistant under Thunder coach Scott Brooks, came to Oklahoma City midway through the 2009-10 season and has been credited for the team's defensive turnabout.

Cheeks, who last coached Philadelphia during the 2008-09 season, was instrumental in assisting Brooks and helping to develop second-year point guard Russell Westbrook and rookie Eric Maynor.