NBA analysts have advice for the Thunder | NewsOK.com
Van Gundy: They couldn't have a better year. They are a rarity in that they became a very, very good defensive team while being so young. And that's basically unheard of. And they did it with not a lot of size. To be that good defensively being that young and rather small for NBA standards I think says a lot to the coaching of Scott Brooks and to the intensity, passion and IQ of the Oklahoma City Thunder players. I do think any team can use more shooting when you're trying to surround your best players, and I do think eventually they are going to need someone that they can throw the ball to in the low post and get a quality shot against .

Michael Jordan to grace cover of 'NBA 2K11' - Game Hunters: USATODAY.com
The publisher has confirmed Chicago Bulls legend Michael Jordan will appear on the cover of NBA 2K11 when it releases on October 5.

"It's an honor to be featured on the cover of NBA 2K11," Jordan said in a statement. "I have no doubt that NBA 2K11 will be a big hit with gamers and basketball fans alike. I'm looking forward to getting back out onto the court, virtually. Let's hope they get my dunk from the foul line right."

How do Thunder measure up with Celtics, Lakers? | NewsOK.com
The two stars used the crass cuss word not maliciously but in the way of marveling at the up-and-coming Thunder. Garnett's infamous, "I thought we were playing Michael (expletive) Jordan" line came in reference to Kevin Durant following the Thunder's 109-104 road win in March. And Bryant, following his team's 95-94 Game 6 escape, assured to Durant and Russell Westbrook, "Ya'll some bad (expletive). I'm glad we're done with you."

State of the Cap: Oklahoma City Thunder | NBADraft.net
This team has a bright future with lots of cap space, and a roster filled with young, developing talent. The team's finances, however, may keep it from being able to make the necessary moves to capitalize on their tremendous young nucleus. The team must decide how aggressive it wants to be about contending for titles before their young stars reach their second contracts, and their core demands more money. If they can bring in some experienced veterens with contracts that run up in time for them to extend their superstars, everything should work out. As of July 1, they will only have three players on their roster who will not be in their rookie deals, and only Thabo Sefolosha will be signed beyond 2010-11. Such a dynamic gives them a surplus of young players who would be attractive to rebuilding teams if they choose to deal quantity for quality.

Dime NBA Mock Draft, Avery Bradley jumps into the Top 10 | Dime Magazine
21. Oklahoma City — Daniel Orton, C/PF, Kentucky His stock dipped in the eyes of many when he only measured 6-9 and a half in shoes, but Orton just seems like the natural fit here. The Thunder still need a post defender, and the hometown kid can give them that.

You be the GM: Kevin Seraphin, France | OregonLive.com
In the mold of Nicolas Batum and Rodrigue Beaubois, Cholet's Kevin Seraphin could wind up as a late first round sleeper pick in this year's NBA draft. Seraphin is tabbed as an athletic big with defensive acumen and offensive upside. Listed at 6-9 without shoes, Seraphin has a massive 7-3 wingspan, much like his French counterparts Batum and Beaubois. He was named Most Improved Player of the LBN this season.

Sifting through noise and nonsense | Atlanta Hawks: Fan Nest
What of Dexter Pittman, the center from the University of Texas? Pittman’s main challenge has been his weight and body fat percentage, but his overall size is intriguing (6′11″ in shoes, 300 pounds, big hands). But would the Hawks be finding the next Glen "Big Baby" Davis, or even Jahidi White? Or would he just be another guy with intriguing size, but no real substance?

2010 NBA mock draft with fantasy implications (15-30)
21. Oklahoma City Thunder: Larry Sanders, PF, VCU: Sanders made his name known in 2008 and didn't let down in 2009, averaging 14 points and nine rebounds to go with over two blocks. The Thunder have Serge Ibaka, one of my favorite young players, but need help with depth in the frontcourt. Sanders would be nothing more than a defensive stopper next season.

26. Oklahoma City Thunder: Jordan Crawford, SG, Xavier: This might be a tad early for Crawford, but the Thunder are thin offensively at shooting guard. James Harden has potential and Thabo Sefolosha is just a defensive stopper, making Crawford's outside shooting a premium. He is a sleeper because of his athleticism and has potential to start if they use Harden as a sixth man. 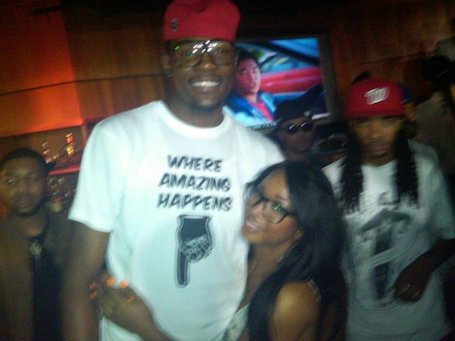 NBA Draft Addicts: June 2nd, 2010 - Mock Draft (full)
21. Oklahoma City - Daniel Orton (C): I personally would dislike this pick if I were an OKC fan; however this is a mock, not my big board. Some team will reach for him early because of his size, athleticism, and thug-like nature on the court; and I think that team will be the Thunder as he is a hometown player who also fills a big need.

26. Oklahoma City (from PHX) - Gordon Hayward (SF): I don’t know if they keep both picks, but I’ll pick as they will. They already took Orton, so now they need to keep filling in role players around their star duo. Hayward, if he can be consistent in his stroke, would be a fine scorer on the wing to work off of Westbrook and/or Durant.