What if we drafted....Gani Lawal?

Share All sharing options for: What if we drafted....Gani Lawal? 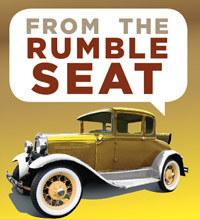 This is a feature that we'll roll out as often as possible leading up to the draft. Basically, we'll be taking an in depth look at some of the potential draftees for the Thunder, and asking questions of the people who know them best, the college blogs that cover them. Up now is Gani Lawal of Georgia Tech University, and BirdGT of the Georgia Tech Blog, From the Rumble Seat. Scott Schroeder of Ridiculous Upside has us taking Lawal at #31, but NBADraft.net has him going a couple of picks earlier, at 30. He's looking like the head of the next teir of big men after Solomon Alabi and Kevin Seraphin. Regardless, he is a potential future Thunder player, so here's the 411 on Gani Lawal.... 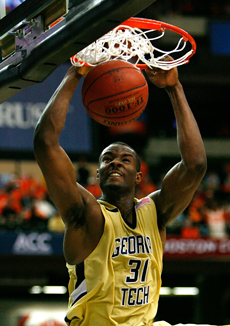 Thoughts on Gani via BirdGT of From the Rumble Seat:

Gani will bring a refined low post presence to any NBA team that Drafts him. Unlike younger players available in the Draft that have more questions than answers about their coachability and personal motivations, Gani has mountains of game experience against upper echelon college talent. Lawal played in 99 college games (48 of which were ACC conference games). He's a strong , physical player that drew constant double teams throughout his college career. Lawal prefers his back to the basket and has a myriad of low post moves. He has a serviceable mid range jumper.

Below: Breaking Down the Stats.

The only statistics that went down Gani's final year were overall FG percentage and minutes per game as he was asked to play less time and play further from the basket due to the inclusion of freshman Derrick Favors in the starting line up. This didn't stop Gani making good moves in the paint, which led to him shooting 50 more free throws than his sophomore season. The only effective defense for Gani in college was fouling him.

Generally speaking, Derrick was our big star last season but if Gani was off on a particular night, Georgia Tech was in for a long night. Here's a piece I wrote illustrating my point.

Defensively, Tech's big men have struggled against star big men. I think this may be more attributable to Paul Hewitt's frantic press defense leaving big men in one on one situations rather than poor defense on any individual's fault. I broke down Tech's defensive efforts against NBA-calibre big men here.

In general, Gani will bring a mature, talented bench player to any squad. Depending on the team, Gani could definitely become a starter.

Many thanks go out to BirdGT for providing his thoughts on Gani Lawal. So, what do you think? Is he worth a gander in the first round? Even in the second round? Does he deserve to be considered above Seraphin or Alabi? Let us know by commenting of voting in the poll!