What if we drafted....anyone from the University of Oklahoma?

Share All sharing options for: What if we drafted....anyone from the University of Oklahoma?

This is a feature that we'll roll out as often as possible leading up to the draft. Basically, we'll be taking an in depth look at some of the potential draftees for the Thunder, and asking questions of the people who know them best, the college blogs that cover them. Up now are Willie Warren, Tiny Gallon, and Tommy-Mason Griffin of the University of Oklahoma. Our guest blog today is the Crimson and Cream Machine. There are many opinions surrounding where these players will go, but it is generally accepted that Willie Warren is the most NBA-ready, Tiny Gallon is a second round reach, and Tommy-Mason Griffin isn't likely to be drafted. Regardless, they are all potential future Thunder players, so here's the 411 on all of them.... 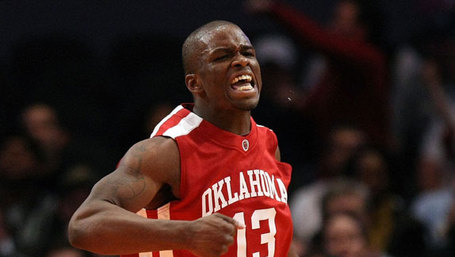 1. What type of player is Willie Warren? His Strengths/Weaknesses?

Warren will make an incredible Robin to someone's Batman but he isn't the superhero. He's a terrific scorer (both inside and out) and a slasher with the ball but when the pressure is on him to take the lead it'll end in epic failure. As a freshman he was sensational sharing the floor with Blake Griffin (despite personality conflicts with teammates) but his sophomore season was marred with more conflicts with with teammates and no leadership. 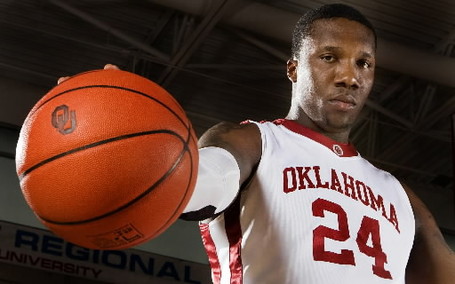 2. What type of player is Tiny Gallon? His Strengths/Weaknesses?

Gallon is a beast who is still learning to use his body. He's got great range which will make opponents have to guard him even on the perimeter but he's a defensive liability. Gallon often gets in foul trouble trying to make up for being out of position or just being lazy on defense. 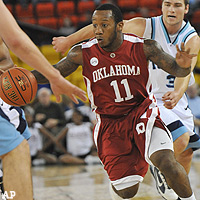 3. What type of player is Tommy Mason-Griffin? His Strengths/Weaknesses?

Mason-Griffin was the best pure scorer on Oklahoma's team last season. When he's on he can score from anywhere on the floor. Kid literally has unlimited range and isn't afraid to pull the trigger. Like Gallon, he's a defensive liability and his size (or lack of) works against him on both ends of the floor. I'd really be surprised to see Mason-Griffin get drafted.

Below: Attitude problems? Where will these guys go?


4. With 3 NBA Caliber prospects on the roster, what happened to OU this season? A nutshell answer is okay.

If you put five guys on the floor and three of the five don't get along because individually they think that they're supposed to be the go to guy on the team and can't stand it when the others get attention or points. Individuals win awards and accolades but teams actually win games. The `09/10 Sooners were more about individuality than team.

5. Based on what you know, out of the three, who do you think would fit in the best on the Thunder roster and why?

I would have to go with Tiny Gallon on this one. Of the three he seemed to be the most "coachable" and actually made attempts to conform his game to Coach Capel's system. The Thunder made their run into the playoffs based off of team unity and discipline. Gallon is least likely to ruin that.

6. Based on what you know, out of the three, who do you think would be accepted the most by Thunder fans and why?

I really don't think any them would be able to make it without earning back the respect of Oklahoma basketball fans. None of these guys left Norman in the highest of regards and will no doubt hear a smattering of boos the next time they take the floor at the Ford Center, regardless of who they're playing for.

7. The Thunder are well-known around the NBA for being a disciplined team with very defined roles. OU was know this year for being a team with discipline problems. With that in mind, do you think any of the three could become accustomed to such a strict roster?

Again, I think Gallon is your best shot here. He seems like the kind of kid who would at least give it an attempt. I think of the three he had the best attitude (not saying great attitude but the best of the three).

8. Do you have a preference as to where each of the three go, or are you just happy to see them leave?

I'm really glad to see them gone. OU can now start over and take a step forward. Watching those three guys attempt to be on a team last season was the most disappointing Oklahoma basketball moment of my life. Couldn't care less where they wind up playing ball next just as long as it isn't in Norman.

9. OU really stunk it up last year, but do you have a favourite moment from any of the three? (Youtube link if possible/applicable?)

My favorite moment from last season would have to be beating Texas in Norman. Unfortunately it was the high point of the season.

10. Do you see Willie Warren cracking the first round? Would he be worth the pick if he fell to 32?

I actually do think that Warren will be taken somewhere between the 35-45 picks. For team chemistry sake I wouldn't touch him with the 32nd pick if I were OKC.

I think Gallon will be gone by 51. If OKC were going to try and acquire him then they'd have to take him at 32 which would be way too early. He's not worth that pick.

12. Lastly, would Tommy Mason-Griffin be worth drafting at 51, or do you think the Thunder could just let him drop and invite him to the Summer League Team?

I don't think that TMG will get drafted. Any team interested in him could get him on a summer league team but I think that his future playing days are going to be overseas somewhere.

Best case is they learn to be team first guys and have long careers in the NBA. Worst case is that they keep their current mentality and just become a few more of the premadanas found in the NBA.

Many thanks to the Crimson and Cream Machine for the info on their players. So, what do you think? Are any of them worth drafting? Leave a comment and/or vote in the poll!