What if we drafted....Larry Sanders? (Featuring Mat Shelton and Michael Hagan of VCURamNation.com)

Share All sharing options for: What if we drafted....Larry Sanders? (Featuring Mat Shelton and Michael Hagan of VCURamNation.com)

This is a feature that we'll roll out as often as possible leading up to the draft. Basically, we'll be taking an in depth look at some of the potential draftees for the Thunder, and asking questions of the people who know them best, the college blogs that cover them. Up first is Larry Sanders of VCU, and Mat Shelton and Michael Hagan of VCURamNation.com. Scott Schroeder of Ridiculous Upside predicted us to take him at #21, but NBADraft.net has him going higher, at #17. Regardless, he is a potential future Thunder player, so here's the 411 on Larry Sanders.... 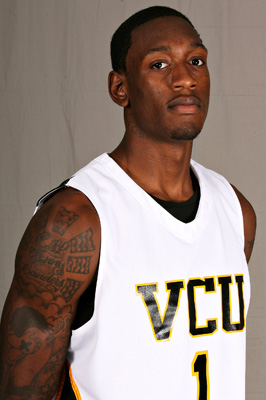 1. What type of player is Larry Sanders? Sanders is definitely more of a polished defensive presence at this point in time (two-time CAA Defensive player of the year). I think his post game could still use some work—he was shooting way to many outside shots early on, not going towards the basket when he wasn't catching alley-oops or getting the easy put-back dunks, but he's definitely headed in the right direction (he's only been playing organized basketball for 5 years, so all things considered...off to a GREAT start). Add NBA caliber coaches and an intense practice schedule, and I think the offense gets to where it needs to be. He's got extremely long arms (7'7 wingspan, the longest in college hoops this past season), so he can clean up on the glass and alters a ton of shots. Super athlete, will run the floor as good, if not better than any other 6'11+ player you'll find in the NBA. He's strong for his weight, but I imagine wherever he goes, step one will be adding more weight to that frame of his.

2. Based on what you know, do you think he'll be an NBA caliber player? If so, who would you compare him to? The obvious (and overused) comparison is Theo Ratliff—similar builds, shot blockers, etc. For OKC fans I'd say he's a longer version of Serge Ibaka. I think his ceiling is much higher than those guys however, as like I've said before, he's still very new to the game, so to date....his learning curve has been pretty impressive. I think in the right situation, he could be a star—definitely fun to watch on both ends of the floor. No disrespect to OKC fans, but the Thunder currently start Nenad Kristic, and a 2 in Thabo Sefolosha who can't shoot. If they can play in the NBA, then yeah...Larry's definitely NBA caliber.

3. Based on what you know, do you think he would be a good fit for the Thunder? If there's one thing I witnessed in my first year as an OKC fan (shout out to Eric Maynor, VCU class of '09!), it's that OKC needs some serious help in the paint. IF, and that's a big if, Sanders would fall all the way to the 21st pick, they would be stupid not to take him. I really enjoyed watching this young Thunder team this past season, and would love to see a lineup with guys like Ibaka and Sanders controlling the paint. How do you get a decent shot off with those two guys in the paint? You don't.

4. Do you think Sanders will drop to pick #21, or do you think he'll go before that? I've seen Larry all over the board this past season, from lottery status, to as low as the 27th pick. I assume a few of those mock draft types know what they're talking about, so I don't think it's out of the question. With that said, the NBA is all about upside, and he's got lottery upside. So while I don't see him landing in that top 14, I think he goes 17 or 18, perhaps heading home to Florida to play for the Heat.

5. The Thunder are a very disciplined squad with a team mentality. Do you think Larry Sanders would fit into that type of environment, or would he be too wild or selfish? Larry had 16 games with single digit attempts this season, so selfish doesn't seem to come close to describing him in my opinion. Truth be told, I'd like to see him get a little more selfish. He'd fit in great with guys like Durant, Westbrook, Harden, and Maynor (who he's clearly pretty comfortable with already).

6. Do you want to see him unite with Eric Maynor on the Thunder to you have two VCU players on one team, or do you want him to go to another team to spread the influence around? We started VCURamNation.com just three years ago, and have been 2-for-2 in sending players to the NBA since we started shooting video of all the games (Eric, Larry, how about a little kick back for that?). I'm really just happy to have rooting interest in the league since the Spurs dropped the florescent colors (they should really bring back that blue, pink, and orange center court logo (Zorgon's Note: Yes!)), so I'm definitely happy wherever he goes. Both scenarios have their upside. If he lands in OKC, I only have to watch Thunder games, so my wife is happy. If he goes to say, the Heat, I've all of a sudden have a pretty serious interest in 3 teams during hoops season (VCU, OKC, Miami)...throw in my fantasy football, and I barely get to see my wife and kid. So while it would be cool to see "Sanders" on the back of another teams jersey, for the sake of my family, I hope he lands in OKC. 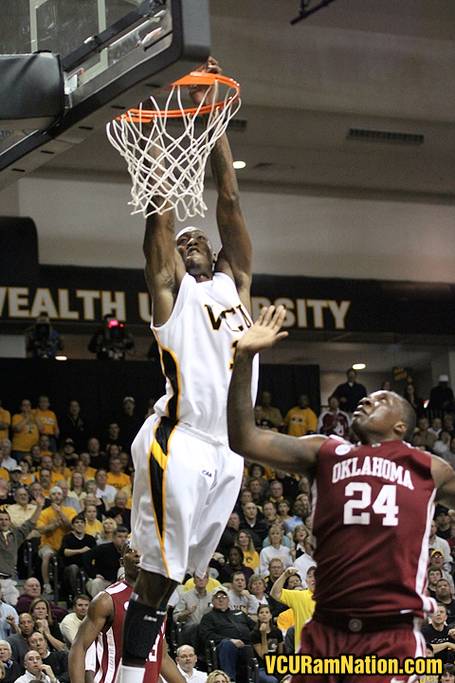 7. What is your favorite Larry Sanders moment? (YouTube link if possible/applicable?) Larry gave me dap in front of a bunch of fellow classmates when I was in grad school, so that made me look kinda cool to a bunch of people...so that was a pretty cool moment. But on the court, his posterizing of Keith "Tiny" Gallon as my Rams destroyed ex-VCU Coach Jeff Capel's Oklahoma Sooners, felt pretty good. (seen here ... http://www.vcuramnation.com/2009/11/video-rams-spoil-capels-return-to-the-stu-upset-sooners/, 5:17 Mark, photo above, also seen at the end of the highlight video). His domination of George Mason in the 2009 CAA Final stands out as well. Broke David Robinson's rebound records for single game rebounds (19) and tournament rebounds. Also posted 18 points and 7 blocks in that game to really put him on the map.

8. In your opinion, what would be a best case scenario and a worst case scenario for Larry Sanders' NBA Career? Best case scenario is he lands in the right situation where he isn't buried behind some perennial All-Star, gets a chance to be a develop his offensive skill set, puts on a few pounds, and becomes the first (or second) ex-Ram to play in an NBA All-Star game. Worst case is he pulls a Blake Griffin and injures himself in his first season, then never catches up and ends up playing for the Globetrotters under the nickname "Sky scrapper".

9. Any other information you might want to include? I've really just enjoyed watching this young Thunder team (especially when Eric gets in and plays like we know Eric can), and I think he'd be a great addition to that squad if they're lucky enough to get him with the 21st pick. In one of our videos Larry said, "I may have a lot of tattoos, but I'm a nice guy", which I think pretty much sums him up. He's a super humble guy who clearly wants to get better, he's great with the fans, and will be an incredible addition to whichever team AND community is lucky enough to get him. Good luck to Larry Sanders AND the OKC Thunder, together or not.

Thanks again, Mat, for the in-depth analysis. So, what do you think? Is Larry Sanders a good pick or a bad pick? Will he even fall down to #21? Let us know by dropping a comment!