Could Kevin Durant Take Over the Thunder?

Share All sharing options for: Could Kevin Durant Take Over the Thunder? 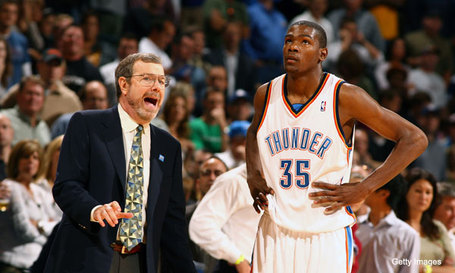 Any coach's nightmare? Or just another excuse for me to post another P.J. Carlesimo pic?

As I sit here, I'm pawing for story ideas, so I'm going to grasp at straws here and ramble on a little bit about Kevin Durant, and what he could potentially do in the upcoming years.

As we all know, Mike Brown was recently fired as coach of the league leading Cavaliers. And we all know why. It's not because his team bowed out rather ungracefully in the second round, or because he's made some bad chemistry moves. It's because of LeBron James. He's basically allowed to do whatever he wants in Cleveland at this point, because the franchise is at his mercy. If he leaves, I wouldn't be surprised to see the team fall below 20 wins. And no, this isn't a knock on the other Cavaliers. It's just iterating the fact that if he leaves, the team is going to be dismantled and rebuilt. They're not going to try to ride out one last playoff run with a "only good for half of the season" Shaq, and an aging Antawn Jamison.

But, the Cavaliers situation has been talked about for days on end, and I'm not here to beat that dead horse. The situation I want to talk about is the one in Oklahoma City....or rather, the one that could arise.

Right now, Kevin Durant is young, and still stuck on his rookie contract. He is essentially at the mercy of the Thunder. If he doesn't like the team, there's not many options for him other than playing overseas. But, his contract ends next season. Imagine if the Thunder get to the second round next season, or even the Conference Finals. We've drafted a guy like Larry Sanders who turns out to be our answer in the paint. People are psyched about the team, and Kevin Durant has another MVP-like season.

At this point, teams are clamoring for Durant. He could go anywhere in the NBA and demand a Maximum Salary. Of course, everyone is preparing for the upcoming Free Agency Season, and less teams will have lots of money to spend in the 2011-2012 Free Agency Season. But anyone saying that nobody will be offering Kevin Durant a Max Contract needs to get their head checked. And who knows what pieces could be offered on the other teams. Maybe Boston will be rebuilding. Mark Cuban's Mavericks won't have a lot on, and could you imagine a Dirk and Durant combo? And, who could ignore the allure of KD's hometown Washington Wizards, who will still have Arenas on contract?

Now, don't get me wrong, I'm not saying that KD will leave, or even attempt to lord his power over the organization. But he can. Would he want Scott Brooks fired, and a players' coach put in his place? Could he call for the Thunder to take a chance on a rebel of a player? Could he change the entire Philosophy of the team? Yes. The Thunder are a business, first and foremost. This teamwork schtick will get fans in now, while the team is trying to improve. But if the Thunder are consistently making runs deep into the playoffs, people will come. And if that compromises the Thunder's "core values", then I'm not entirely sure the Thunder management will care.

Right now, the Thunder are a perfect team for Oklahoma City. All about selflessness, hard work, and good values. But, in an instant, this could become Durant's team. Or it could become the team that let Durant slip away.

Of course, this is all a year down the line. But, it's always interesting to think about.

What do you think? Vote in the poll, drop a comment!