What if we drafted....Kevin Seraphin? (Featuring Gregoire T. of Airball.fr)

Share All sharing options for: What if we drafted....Kevin Seraphin? (Featuring Gregoire T. of Airball.fr)

This is a feature that we'll roll out as often as possible leading up to the draft. Basically, we'll be taking an in depth look at some of the potential draftees for the Thunder, and asking questions of the people who know them best, the college blogs that cover them. Up now is Kevin Seraphin of France's Cholet Basket, and Gregiore T. of Airball.fr. Scott Schroeder of Ridiculous Upside has us letting him slip to 23, but NBADraft.net has him out of the draft entirely. With foreign players, it's almost impossible to tell how good they actually are, and where they'll land. Regardless, he is a potential future Thunder player, so here's the 411 on Kevin Seraphin.... 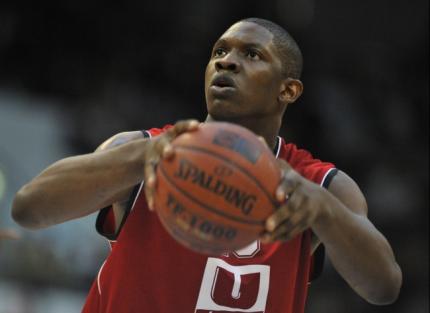 (Keep in mind, English is not his first language. So be gentle.)

1. What type of player is Kevin Seraphin?

Kevin Seraphin is a young center, not very high (2m05) but very strong physically (120kg). He has good hands, good moves, good defense, he can run and jump. He came play in Cholet, France from French Guyana a while ago but he really became a prospect for 3 years. He made a lot of progress every last years and was named Most Improved Player for this season a few weeks ago.

I think he'll be an NBA player but in my opinion, he should stay one more year in ordre to learn the fighting spirit against some Centers with experience in the Euroleague before going in America. It's difficult to compare him... he's to small to be compared with the Shaq, he is a great shooter in the paint but he has to work on his outside shot to be compared to Karl Malone or Carlos Boozer... maybe Emeka Okafor ? You could compare him physically to the french center Ronny Turiaf (Warriors) for his rebounds and blocks : he just don't have as much as energy but he could become way better offensively !

Yes ! He could be a great alternative for Nenad Krstic in the paint. I have the image that the Thunder is a good team with great guards, forwards but with no dominant player under the basket : Seraphin had exactly this role with the Under20 National French Team last Summer (France finished with the Silver medal, Kevin was nammed best Center of the Euro Championnship). He made a lot of progress every last years, give him time (he's only 20) and he's gonna be a great Center for every NBA Team.

He's playing the French Playoffs right now (his team of Cholet just qualified in Semi-Finals yesterday) so he's gonna miss the work-outs : it could be a bad thing for him... even if he win the french championship. NBA Scouts and coaches seem to prefer have the opportunity to test their futur draft choice ! But he has the talent to be drafted in the 1st round : 21st pick... why not ?

5. The Thunder are a very disciplined squad with a team mentality. Do you think Kevin Seraphin would fit into that type of environment, or would he be too wild or selfish?

I'm not an expert of the NBA and the Thunder so I didn't know that. This would be great : Kevin is not selfish, not too wild and seems to be a good Kid able to work hard. His actual Team (Cholet) is also a very disciplined squad with a team mentality, maybe just a little older than the Thunder team.

6. Do you want to see him go to the Thunder, unite with other French players like Tony Parker, or go somewhere else?

I think the Thunder would be a good young talented Team for him, yes... maybe not too much talented in the paint in order to help him have a spot in the rotation. I heard Kevin would prefer play for Dallas because Rodrigue Beaubois is there or for Orlando because he's a fan of the Magic (also because there is Pietrus and Florida is not too far from French Guyana I guess), I just wish he'll find a good coach for young players.

7. What is your favorite Kevin Seraphin moment? (YouTube link if possible/applicable?)

KS dunks and blocks a lot but he's not very demonstrative or spectacular :( Here is a few links where you'll be able to see the kind of player he is :

A few dunks at the last Nike Hoop Summit (number 11 in grey).

At the last Eurobasket Under 20, he destroyed the Italians....

The french League made a highlight video for his MIP Award with Cholet.

The Best for him would be to drafted not too high by a good NBA Team which allows him to play one more year in Europe and come in the NBA in 2011.

The Worst : Being drafted by Minnesota or a team with an undefined future...

9. Are there any upcoming games for him that we can keep our eye on?

Yes : Cholet (1st Team of the Regular Season) just qualified for the Semi Finals (They beat Poitiers 2-0). They don't know their opponent yet but they are gonna be the favorite to play the Final (one game in Paris). Seraphin was also called to play for the Senior National Team to prepare the World Championnship so if the coach choose him, you could see him play in New-York against Team USA in preparation on August 15th... and maybe in Turkey after that, but there could be many Centers before him even if Ronny Turiaf won't come.

Yes, just to say that the Team (Cholet) where Seraphin plays is well known for helping young talented players. Before Kevin, Antoine Rigaudeau grew up in Cholet and played for the Mavs (and the Olympics), Mike Gelabale made Cholet>Real Madrid>Seattle Sonics and recently Nando De Colo was drafted by the Spurs and Roddy Beaubois made a good rookie season with the Mavs.

Thanks again, Gregoire, for the in-depth analysis. So, what do you think? Is Kevin Seraphin worth the reach in the first round? The second round? At all? Let us know!