Share All sharing options for: Thunder vs. Lakers Series Preview 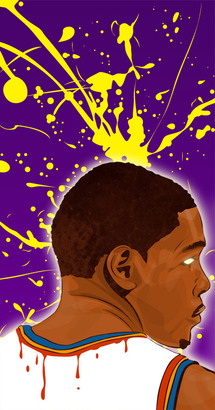 So, the day is finally here. The Thunder are finally playing the Los Angeles Lakers later on this date, and you just can't wait! What can you possibly do? Is there any way you can find to waste the remaining hours, minutes, and seconds before the first game actually happens?

Well, you can read this preview, of course!

Firstly, let's start this preview off right with some backstory....

The Thunder are coming into this series after finishing off the regular season a disappointing 9-8 via a tough end of season schedule. The Lakers also finished disappointingly, but they cruised into the 1 seed because most of their roster was beaten up. The teams are only 7 wins apart, but if you look at the culture surrounding it, it looks like the battle of a mammoth versus a mouse.

The Lakers are the returning champions, have a largely unaltered roster, and have sat comfortably at the number 1 slot in the West all season. Meanwhile, the Thunder are a young team with little to no playoff experience coming off of a 23 win season. The Lakers play in one of the biggest cities on the planet, and the Thunder play in a city that is hardly over 100 years old. The Lakers are the NBA's most successful franchise, and the Thunder are playing with a team they stole from Seattle only 2 years ago. The list could go on.

The point is, this series is pretty big for Thunder fans, but it's pretty irrelevant for Laker fans. The Lakers just want to get by us as fast as possible so that they can worry about whether they'll have to play Phoenix or Dallas in the Conference Finals. Our job, even if not to win, is to make sure that they remember this series. The Thunder can't settle for being another footnote in the path to Lakers Glory. They have to make their first ever playoff appearance a memorable one. And if they don't, then, well, we've got many years ahead of us, and the Lakers don't. Always remember that.

And how would it not be a preview without the classic matchup format?

This is the area where the Lakers have the most major advantage of the series. Nenad Krstic is a offensive center, so he'll have a couple of points off of jumpers, but he generally proves to be ineffective at anything but setting screens when playing the Lakers. Hopefully he'll either heat up on offense or get out of the way.

Again, this is not an optimal matchup for the Thunder, and it's more than likely that Pau Gasol will win it every time. But Jeff Green's objective shouldn't be to outdo Pau Gasol. He should try to play his game, and keep from being incredibly inefficient. I'd say a double double is reasonable to hope for. Meanwhile, he should get in front of Gasol and make sure that passes don't come to him in the first place.

This matchup has proven to be interesting throughout the course of the season. It's most interesting because Ron Artest hasn't found a way to stop or even slow down KD's offensive efficiency. Thus, the importance in this matchup lies in Artest's ability to score. Traditionally, if Artest scores, the Lakers will do well. And if he doesn't, then they could be in for a long ride.

Here, the matchup relies solely on Sefolosha's ability to annoy Kobe. If Kobe's efficiency is affected, the Thunder will be on the road to success. Sefolosha's scoring can be down with or without though.

This matchup will mainly center around Russell Westbrooks ability to exploit this matchup without falling for Derek Fisher's stupid tricks. That is, things like drawing stupid charges. Oh, and make sure that Fisher isn't an offensive factor, either, because that could spell immediate doom for the Thunder.

Thomas is a long shot to play, but I put him here because he played in the regular season finale while Krstic was out, and he defended Zach Randolph quite admirably. If he does see the floor, it will be for the express purpose of guarding Bynum or Gasol. Nick Collison will do the dirty work inside, defending as well as he can, getting garbage buckets, and rebounding. Ibaka will be a huge X-Factor, because he has the ability to get it going against Superstar quality big men.

Odom is the key factor here. Powell and Mbenga are basically borderline scrubs who both got cast off the Warriors back in the day. Now they play as few minutes as possible on the Lakers, trying to not screw things up. Mbenga is more of a defensive player, and Powell is more offensively oriented. But, again, the main guy you have to be worried about is Odom. He can come off the bench and put up All-Star caliber numbers, and he averages a double-double. I'd just be sure to have either Collison or Ibaka out when this guy steps on the floor.

James Harden is a huge X-Factor for the Thunder. When he's on, he provides the additional scoring boost needed to get the Thunder up to the Lakers' level. When he's off, the Thunder will come up just a bit short. Eric Maynor will also need to keep doing his thing. Mainly, I'd like to see him avoid stupid, poorly taken, late in the shot clock shots.

Shannon Brown will come in and score with drives to the inside when the Lakers need it. Jordan Farmar is your typical backup point guard. I don't expect either of them to have a large impact, but Shannon Brown might score around 15 at some point.

Keep on the look out for minor Laker injuries to reoccur, and for the atmosphere in Oklahoma City to be even crazier than normal.

Lastly, lets close this preview with the keys to winning the series....

1. Russell Westbrook has to exploit the Derek Fisher matchup somehow. He's done decently in the past, but I'd like to see him get to the line more often, which is kind of difficult to do against Derek Fisher, one of the best floppers in the league.

2. Jeff Green needs to find his way around Pau Gasol. Not an easy task, but maybe resorting to a good amount of mid-range jumpers will do the trick.

3. Ibaka, Krstic, and Collison all need to play out of their shoes defensively and prevent Bynum and Gasol from exploiting us inside too much.

4. James Harden needs to score and shoot well. He did wonderfully against the Rockets, but that was his type of game. If he doesn't score, our bench starts to become anemic on offense, and we can't afford any droughts against the Lakers.

5. Thabo Sefolosha will have to have a profound effect on Kobe Bryant. I'm talking turnovers, missed shots, whatever. This is probably the most important key. The Lakers offense starts and ends with Kobe Bryant, so you're going to have to limit him if you want to win.

Oh, and, last but not least, a prediction!