Reconstructing We Believe: Are we the 2006-2007 Golden State Warriors?

Share All sharing options for: Reconstructing We Believe: Are we the 2006-2007 Golden State Warriors? 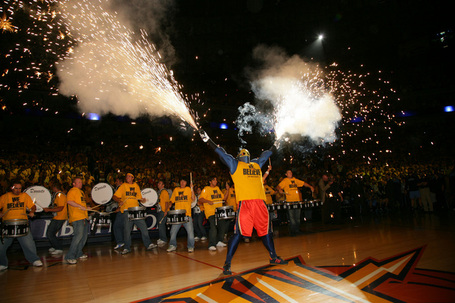 Are we going to see this in the Ford Center any time soon?

For those of you who don't know, the 2006-2007 Golden State Warriors were the greatest team ever. Well, not really, but for a Warriors fan, they might as well be.

In essence, they're famous because they're the first 8 seed to ever upset a 1 seed in a 7 game series. The Knicks did it in 1999, and the Nuggets did it in 1994, but those were both 5 game series, and thus less major upsets. Since the Thunder are a hot team right now, experts are predicting the Lakers-Thunder series to be much closer than most 1 to 8 seed matchups, as most experts did before the Mavericks-Warriors series. From this, the question arises: Are we going to be the next 2006-2007 Golden State Warriors? Lets take a look at some of the similarities and differences.

Below: Similarities and Differences.

Both of the higher seeds are returning to the playoffs from very successful runs. The Mavericks were one year removed from a NBA Finals run in which they lost after going up 3-1, and their opponent, the Miami Heat, weren't threatening to return. The Lakers are returning from an NBA Finals win, and look to repeat their success.

Both the Warriors and Thunder had bright futures ahead of them. Until the Warriors were mismanaged and injured into oblivion, it seemed like they had a few good years in front of them, with experience and upcoming talent on the roster. The Thunder also have a very bright future, for reasons explained many times prior on this blog.

The Mavericks weren't injured, the Lakers are. The Lakers players are full of minor injured that they'll have to play through, including Ron Artest with tape on his shooting hand, Shannon Brown with the same thing, Andrew Bynum with a strained Achilles, and Jordan Farmar with a strained hamstring. By contrast, the Dallas Mavericks had virtually no injuries going into the post-season, and they looked invincible.

The Mavericks looked invincible, and the Lakers look very human. The Mavericks were coming off of an NBA finals run in which they lost after going up 3 to 1 on the Heat. The Heat weren't looking nearly as menacing this year, and the Mavericks were tearing through the regular season, finishing with 67 wins. The Warriors finished with 42 wins. All in all, that's a difference of 25 games, or almost 1/3rd or the regular season. By contrast, the Lakers have done almost everything possible to squander their #1 spot, and are only 7 games ahead of the Thunder.

We don't have a series advantage on the Mavericks, the Warriors did. The Warriors, even when they were languishing under coach Mike Montgomery, always seemed to have the Mavericks number. They were a fast team who could blow by the Mavericks older players. The Thunder have only beaten the Lakers once in the past two seasons.

The Warriors were full of playoff veterans, and the Thunder aren't. While the Warriors weren't the greatest team in the world, they did have playoff veterans on their roster. Baron Davis had been to the second round with the Hornets. Al Harrington and Stephen Jackson were there with the Pacers. In fact, Stephen Jackson had won a ring with the Spurs. Even those without playoff experience were veterans. Jason Richardson was in his 6th season, and Mickael Pietrus in his fourth. Sure, there were some inexperienced players, like Monta Ellis, Andris Biedrins, and Matt Barnes, but they mostly sat on the bench for the duration of the playoff run. The Thunder, meanwhile, have a couple of veterans in Nenad Krstic (Nets), Thabo Sefolosha (Bulls), Nick Collison (Supersonics), Etan Thomas (Wizards), and Kevin Ollie (Many Teams). But the latter two don't play, and Krstic, Sefolosha, and Collison are mainly role players. Our main players (Durant, Westbrook, Green, Harden, Maynor,and Ibaka) are all without NBA playoff experience.

The Warriors were wild, but the Thunder are reserved. Stephen Jackson and Baron Davis are players that are about as Wild N' Out as you can get when it comes to personality. The Thunder are almost a polar opposite in that almost nobody celebrates after a big play, and the whole team stays relatively reserved for the duration of the game. The wildest you'll get is Serge Ibaka, who spreads his wings on occasion.

The Mavericks and Warriors shared an innate link while the Thunder and Lakers are relatively unrelated. Don Nelson was only 2 years removed from the Mavericks, and the then coach of the Mavericks, Avery Johnson, was Don Nelson's apprentice. As a result, Don Nelson knew Avery Johnson's tactics in and out. Meanwhile, the Lakers and Thunder have no such connection.

The Thunder don't create matchup problems like the Warriors did. The Warriors were a small balling team who took it to the hoop and shot scores of threes playing a relatively stiff team that played a much slower paced game. The Thunder and Lakers play very similar paced games.

So, what's the end point? These teams are almost completely different. The Warriors were the true underdogs, lead by a coach grasping for revenge. The Thunder are only a few games removed from their opponent, and the composition of their team is much different. Both teams are fun to watch, both series will be fun to watch, and heck, both teams could win. But, in the end, they are both vastly different, and if the Thunder won this series in 4 games, they still wouldn't have made as much of an upset as the Warriors did in 2007.

Tip of the hat to Q McCall for beating me to the punch.