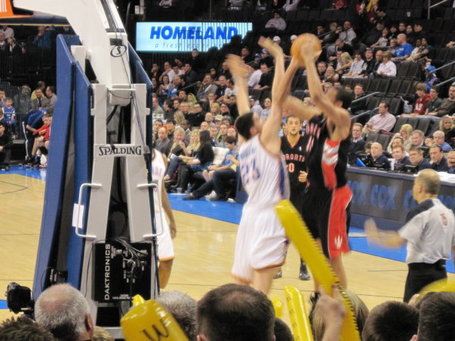 Picture courtesy of me!

Well, it's always nice to see a game like this one. The Thunder were never in any real danger of losing the game, and we got to see lots of scrub action, including and epic battle between B.J. Mullens and Patrick O'Bryant. The Raptors never led throughout the entire game, and they were consistently missing shots. There was no real point where it went to pot for the Raptors, either. It was just a gradual slip into a loss.

The main difference, in my eyes, was the Thunder's ability to get to the line. Both teams shooting percentages aren't that far off considering how far apart the final score was. But whereas the Raptors would just miss a shot, the Thunder would have Kevin Durant, Jeff Green, or Russell Westbrook get to the line.

Not to mention the fact that the Raptors were without Chris Bosh. They had absolutely no inside presence. The only legitimate inside scorer they had was Sonny Weems, and he pretty much had the best game out of any Raptor on the floor. Everybody else scored from the outside, making the team really predictable and seceptible to our strong perimeter defense. Without Bosh, they're essentially a walking stereotype of all European teams and players. Just a bunch of guys who pass, shoot, and not much else.

There's not a lot else to say, so I'll just hand out some awards. 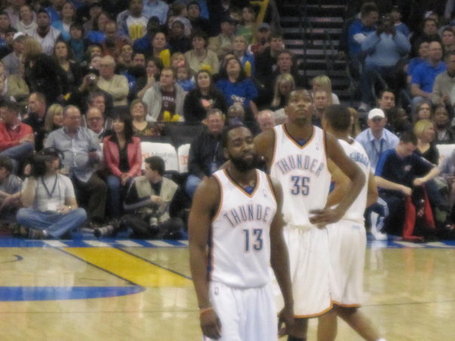 Thunder Wonder: Kevin Durant, for being a bad Mamma Jamma and basically dominating every single facet of the game.

Thunder Down Under: Jeff Green, for finally returning to form in this game, even though it was a blowout.

Thunder Blunder: B.J. Mullens, for shooting 2 of 5 in Garbage Time.

Thunder Plunderer: Sonny Weems, for nearly outscoring all of the starters.