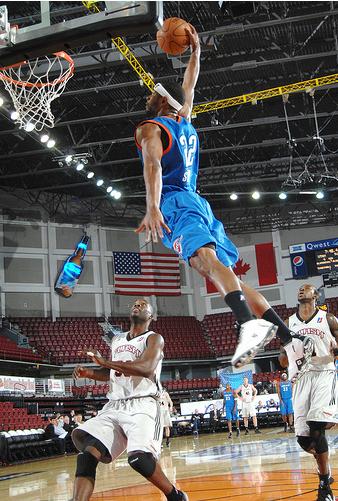 Flying high in front of tens and tens of fans!

After Shakur was tearing it up for the 66ers up in Tulsa, he was called up to the Thunder this afternoon. Apparently, he's going to replace Antonio Anderson, as we have to cut someone, and we don't have any more room on our roster.

Shakur has been getting similar stats to that of Kyle Weaver while in the D-League, averaging 20 points, 5 rebounds, 7 assists, and 2 steals. Still, it should be noted that those stats can be very inflated, as he averaged a much more paltry 6 points, 1 rebound, and 1 assist last year while playing for TAU Ceramica in the much more competetive Euroleague. It's also the team where both Luis Scola and Tiago Splitter came from, but they averaged far better numbers.

In all honesty, I doubt he'll get much playing time. He's basically here to be what Antonio Anderson never was; a emergency backup behind Weaver and Ollie that can step in and play serviceably if need be. And hey, if he turned out to be better than both of those guys, then it's a nice surprise. In any case, it was a good move, because I doubt Antonio Anderson was going to work out for us, and it's always nice to have a awesome name on your roster like "Mustafa Shakur".

Look for him to be in uniform tomorrow against the Raptors.