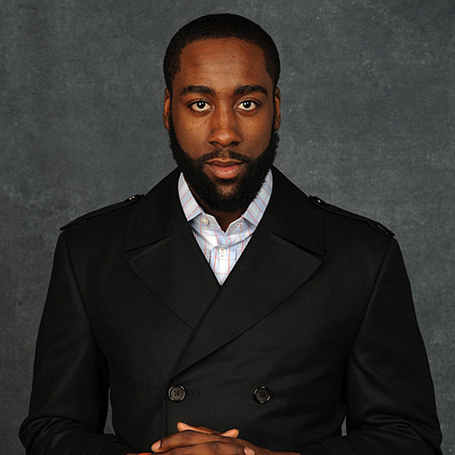 Harden shows how fresh his fashions are this All-Star weekend.

Thunder's James Harden is proud of his defense | NewsOK.com
Coach Scott Brooks said the organization was confident Harden could shoot, was an underrated passer and had a high basketball IQ.

The big question was whether Harden could hold his own defensively after playing nothing but zone at ASU. "It was definitely a big adjustment going (man-to-man) against the best players in the world," Harden said. "That’s always tough. It took me some time to learn. Letting me guard guys like LeBron and (Atlanta All-Star) Joe Johnson shows they have more confidence in me."

Harden is best known for his dagger 3-pointers, which were on display in a win over Portland on Tuesday night. Harden scored all 13 of his points early in the fourth quarter to help the Thunder post their sixth consecutive win to improve to 30-21 at the All-Star break. The No. 3 selection in last year’s draft, Harden ranks seventh among rookies in scoring (9.8), fifth in steals (1.0) and ninth in assists (2.0). One of ASU coach Herb Sendek’s favorite lines is "be an everyday guy."

Pera said Harden losing 15 pounds after the season was yet another sign he would do whatever it took to succeed in the NBA. "I can tell he’s a lot more comfortable now, that he not only knows he can play in the league but can be pretty good," Pera said. "He’s really been focused. He’s playing in the rookie game this year, but I know in a few years he’d like to play in the Sunday game.

Kevin Durant goes to this weekend's NBA All-Star Game to serve notice of his stardom - ESPN
Jackson: How are you able to separate what you've been able to do individually and what you've been able to accomplish in a team situation this season? Like, your going to the All-Star Game is an individual accolade, yet you understand that you probably wouldn't be going if it weren't for the squad you have and the fact that you all are winning. How do you separate the two in your mind?

Durant: It's kind of like you just said, I know without my teammates I wouldn't be there. Once I put on that jersey -- and long as I have an OKC logo on the back [of the warm-up] -- that is going to allow me to believe that without them, I wouldn't be here. I always have to thank them for helping me get here, you know. Help me become the player I am, always encouraging me, always pushing me to get better. Because without that, none of this stuff would even be happening.

[Click the link above to read to read the entire interview.]

Kevin Durant’s Moment to Become Household Superstar Arrives at All-Star Weekend | Sporting News
For a first-time All-Star, though, the game is a little different. In many cases, these players are appearing on a national stage for the first time. The All-Star Game is their chance to show their stuff in front of many eyes that haven't seen them before, to prove that their previously faceless numbers are attached to exciting and marketable games and faces.

What I'm getting at is that this could be the weekend where Kevin Durant changes his public image from an underappreciated offensive genius into one of the league's acknowledged superstars. After a historic first half—his streak of 25 consecutive games with 25 points or more is the longest since Allen Iverson's did it 27 times in his MVP season of 2000-01—Durant is ready to bust out on the national scene.

Last year's All-Star Weekend belonged to Durant, too, even though it was over by Saturday afternoon. In the Rookie Challenge, he set a scoring record with 46 effortless points and generally looked like someone who should have been playing on Sunday. Then, on Saturday, he took the inaugural H.O.R.S.E. competition with a display that, while not exactly thrilling, proved that he has a killer instinct that can't be turned off for even the most frivolous of events (I can't wait to see him in Shooting Stars after he retires). Last February, very few people outside of the most devoted League Pass subscribers had even seen Durant in more than a few games. When I tried to tell people last season that he was already one of the 10-best offensive players in the league, few believed me. His All-Star Weekend performance made people notice that he was developing at an alarmingly impressive rate in Oklahoma City.

Predictions: All-Star Friday | Hoopsworld
HOOPSWORLD asked their staff what the results of All-Star Friday from Dallas would be. Check out their thoughts, then post your own! [I left the details out since we are still making predictions of our own, but take a peek if you are interested.]

Here are the players who have reached that less-than-Westbrook threshold before the age of 22: LeBron James twice, Magic Johnson twice, Chris Paul twice, Isiah Thomas, Gilbert Arenas, Derrick Rose and Allen Iverson. Westbrook and current rookie Brandon Jennings are on pace. If you don’t round down so far, just go with 16 points, four rebounds and seven assists, you end up with only LeBron, Magic twice, CP3 twice, Isiah, Iverson and Westbrook. That’s called tall cotton.

Let’s go back to that Golden State game: 21 points, seven rebounds, 10 assists, eight steals. I ran the numbers for anyone who ever totaled 20 points, seven rebounds, seven assists and seven steals in a game. Again, that’s below Westbrook’s production that night. Only two players in NBA history have done it before the age of 22. Westbrook and Baron Davis.

Thunder Roll Into the All-Star Break | KSBI Thunder TV | Oklahoma City
I could gush over the continued progression of 21 year old All-Star Kevin Durant, who's putting up unprecedented offensive numbers (like his franchise record 25 consecutive games scoring 25 or more points or his NBA high 30 games scoring 30 or more points), and Russell Westbrook who's becoming a walking triple-double threat nightly. Extoll the virtues of Jeff Green's uncanny knack for coming up biggest when his team needs him most at the end of games whether it be by drilling a clutch three point shot, dunking over a defensive stalwart or blocking a game saving shot. Lay out the selfless defensive tenacity and stick to-a-tiveness of Thabo Sefolosha, an inspiration to his teammates nightly. Discuss in detail the significance of Nenad Krstic's offensive bursts that swings the pendulum of momentum firmly in the Thunder favor frequently. Or spend the next few paragraphs laying out any how important any or all of the following are to overall team success: Nick Collison's pick setting and charge drawing skills, James Harden's timely long range marksmanship and play-making, Serge Ibaka's exuberance and energy and big time shot-blocking and rebounding and the poise with which ROOKIE POINT GUARD Eric Maynor runs the offense. But the bottom line is that each without the others would not be generating the results we are now consistently seeing from this team. THIS IS A TEAM! That is the ultimate complement and the biggest reason that many national pundits are projecting this outfit as a playoff team this season. This team is the most compelling component in the projected post season landscape in the Western Conference entering the season's final 31 regular season games. That should make the final two months of the season a must watch and listen!

Kevin Durant Is Going To Win The All-Star Game MVP | Dime Magazine
With more playing time coming KD’s way owing to those injuries, combined with playing alongside four great point guards, could be the perfect recipe for Durant to go off for an insane amount of points. His 29.7 points per game this season is a prime testament that he was put on this planet to simply get buckets. As a player who can finish above the rim as well as knock down the outside shot, Durant is going to have plenty of opportunities to put the ball in the hoop as he receives the rock from some of the games finest PGs in Steve Nash, Jason Kidd and Deron Williams.