Darnell Mayberry with a list of five factors that have led to Kevin Durant's slow start this season.  The scoring has still been there but his turnovers are way up and his FG% is way down.

After Saturday's Heat-Nets game, Terrence Williams accused the Super-friends of hot-dogging, showboating, and running up the score; basically kicking the Nets while they're down.  LBJ says the Heat are "not [a] circus", but Trey Kerby has some very compelling evidence to the contrary.

- After the jump: the state of the T-Wolves, plus the Turks are super excited to see AI -

This is the state of things in Minnesota- Michael Beasley (with the exception of Kevin Love, perhaps) is the most motivated, focused, and talented player on the Timberwolves roster.  Just repeat that in your head and check this video for evidence-

AI arrived in Istanbul to see a mob of fans welcoming him, yelling, chanting, and singing in Turkish.  Here's a pic (^video in link above^) of the madness- 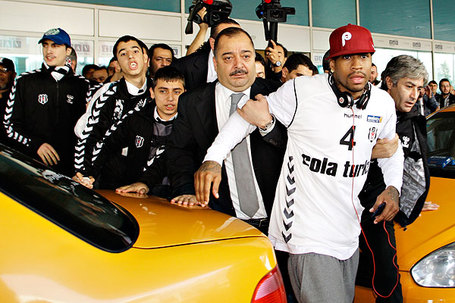 It's interesting to see such a turnout for a player who has been recognized as done-with in the NBA for a couple years, even though he was such a bright star at the beginning of his career.