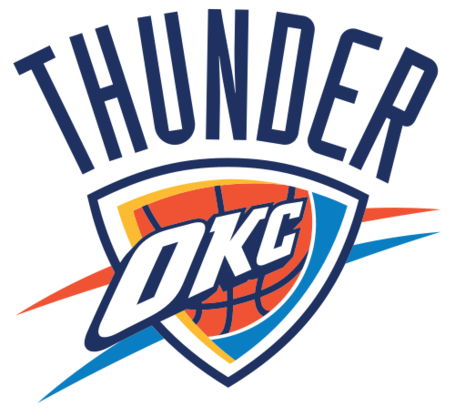 1. What Significant Moves were made during the off-season?

Admittedly, this off-season has been much quieter than the last two, but it was still an important one in all accounts. As far as losses go, the three guys we're losing are of minimal importance. Ollie and Thomas are in the twilight of their careers and only played sparing minutes, while Kyle Weaver seemed to have hit his developmental peak, and he was constantly buried on the Depth Chart.

A breakdown of the moves made during the draft can be found here, but in essence, a bunch of picks were turned into Peterson, Cook, Aldrich, a future Clippers First, and some lower-tier prospects. As far as acquisitions go, we hit the jackpot. Our main weakness last year was three point shooting, so that weakness was addressed by acquiring Cook and Peterson, two excellent players in that department, from teams desperate to lower their cap for the upcoming Free Agency. In addition, the Thunder have been in an eternal search for the next great big man to replace the rather average Krstic and Collison. They seem to have found their man in Cole Aldrich, a lottery pick and solid center from Kansas. He's still a total question mark at this point, but we should get to see him in pre-season action, and Sam Presti has never busted on a pick before. Lastly, we have the low-key signing of Royal Ivey. He's mostly there as a defensive insurance policy, should Thabo get hurt. It's a solid move, but still a bit questionable, as some believe Kyle Weaver could have done a better job. But Sam Presti is fond of having veterans deep in the roster, so this move is only a continuation of that philosophy.

2. What are the team’s biggest strengths?

If you watched any of the video from Thunder Media Day, you'd have to be deaf to say that you didn't hear the word "defense" at least once, especially from Sam Presti and Scott Brooks. And that's the main strength of this team moving forward. Kevin Durant was a defensive liability early on last season, but his defense slowly improved over time, and it got even better over the Summer, as evidenced by his stellar performance in the FIBA World Championship. In addition, Thabo Sefolosha is known as one of the best lock-down defenders in the nation, while Serge Ibaka is one of the best blockers in the NBA. Overall, their defensive rating was 9th in the league last year, and that number is expected to improve as the team becomes more experienced together.

Secondly, I think our transition offense is a strong asset. With an athletic guy like Jeff Green at Power Forward (and sometimes Ibaka at Center), you can have 4-5 guys on the floor at any given time who are capable of beating their man down the floor and scoring some easy points. It may seem like a small facet of the game, but it can make for a 10 point difference, and that's a lot when it comes to the end of the game. Don Nelson should be taking notes in Hawaii, because the Thunder have beaten him at his own game.

Thirdly, our team has clear cut and very well-defined roles for its' players. This isn't a random mixing of talent, rather, it's a complex puzzle put together according to what each player can bring to the table. Kevin Durant, Russell Westbrook, and Jeff Green to the bulk of the scoring. Westbrook, Maynor, and sometimes Harden distribute the ball. Harden provides energy scoring off of the bench. Sefolosha provides defense and the occasional three. Collison does garbage work in the post. Nenad Krstic does pick and pop plays while rebounding the ball. Serge Ibaka provides defensive tenacity in the post. Cook and Peterson provide 3-Point-Shooting and all around games. None of the players try to step outside of their roles, and they all play them well.

3. What are the team’s biggest weaknesses?

Enemy number one is turnovers. The fault here mostly lies in the fact that Russell Westbrook drives a lot and can get the ball stripped or make bonehead passes. But there's also the fact that this is a young team, and that they make a lot of stupid mistakes.

Enemy number two is youth. Most of the players we're using are in their first, second, or third years of play. Most of them still haven't filled their full potential, and are still looking to develop roles for themselves on the team. Aldrich is likely to be liability as a rookie, Ibaka's offense is still a bit shaky, Westbrook is still perfecting his ball handling skills, Harden is still looking to diversify his offensive game, Maynor has trouble creating ball movement sometimes, and Mullens and White are still huge question marks. When it comes down to it, this team is led by guys barely old enough to drink, and that can spell trouble when it comes to making a late-season or playoff run.

Enemy number three is clutchness. We achieved a lot last year, and we seem to have proved ourselves as an emerging power in the NBA. But the fact remains that we still haven't hit a game winning shot, and we still have problems going down the stretch. Kevin Durant will often miss key shots, and we're not very creative in drawing up our last plays. Too often I see that same, tired old play of Kevin Durant getting a pick and shooting a heavily contested jumper deep from downtown. And too often I see the ball fumbled around in the backcourt, leading to no shot at all. I know that you've got to give the ball to your best player at the end of the game, but creativity every now and then can help keep other teams on their toes. And until the Thunder can win games in the clutch, they won't be considered among the NBA's elite.

4. What are the goals for this team?

If you talked to the Thunder's marketing department, they'd tell you that they'd like to "grow as a team" or some BS. But, if you took a poll of what fans and players generally felt, I think the goal this year would be to get home court advantage in the first round, and win a playoff series. Nobody is making championship talk as of yet, but if the season starts well, who knows?

5. Will this team suffer the "second year curse"?

What is the second year curse? Well, it's basically the thought that most surprisingly successful teams eventually hit some growing pains. A shift in the roster, a key injury, or other factors can contribute to this slump. The Hornets experienced it in 2006-2007, and other young teams like the Bulls and Trailblazers have had trouble finding their way into the NBA's elite. And, though I'm tempted to say yes, right now, signs are pointing to no. Over the past two years, this has been one of the healthiest teams in the NBA, and the only players likely to go down for any significant amount of time are the mostly replaceable big men. Of course, Durant and Westbrook's work for Team USA in the summer could lead to him being more injury prone, but since they're at such a young age, any speculation is iffy at best. There have been some minor shifts in the roster, but by and large it won't be affecting the gameplan, and if the new acquisitions end up getting in the way, the team can just revert to last year's lineup. Finally, there's no outside factors like ownership issues, chemistry problems, or civil unrest getting in the way. Thus, this team seems destined for a quick rise to the top, given all of the information at hand. But a broken bone on Durant's body could change all of that in an instant.

Predicted Record: 53-29. I hate predicting over 40 wins, since all bloggers seem to do so. But given the success of this team, I have to go high. And I'm predicting a 3 win improvement. Sure, it's not much, but I don't think the Thunder will have a perfect season, and I think that there will be some small growing pains when integrating the younger players into the lineup.

Note to the reader: I traditionally do a 15 question preview, but for the purpose of this blogger preview, I've limited it to 5, so it can be digestible for a mainstream audience. Questions 6-15 will be released soon in a separate post.

Thanks to Jeff Clark at CelticsBlog for organizing the NBA Blogger Previews again this year.