"The team started 3--29 in 2008--09, losing five games in the last six seconds, and coach Scott Brooks would stay up until dawn trying to think of something positive to say. The best he could do sometimes? "We're not losers." He was proved right last season, when the Thunder leaped from 23 wins to 50. Durant became the youngest scoring champion ever, Brooks the coach of the year, Russell Westbrook the must-see point guard. The Thunder bore the unofficial title Most Fun Team, sold out 31 games at the 18,203-seat Ford Center, nearly doubled its local television ratings and did it with leading scorers who were 21, 21 and 23. Duke's were 22, 21 and 21 when it won the national championship last April."

The SI cover story on the Thunder that freelantz brought up yesterday.  Pretty good, and always nice for the team to see some national coverage and get a little notoriety.  I wish people would stop acting like there's absolutely nothing to do in Oklahoma City, though; growing up in OKC I know that's not true.  The choice of players for the cover is interesting as several people have pointed out. I too thought Westbrook was seeing enough recent attention to make it on there, but for whatever reason, Nenad and Thabo accompany KD and that's rad too.

APL Shoes Banned By the NBA | via Food With Sole

Athletics Propulsion Labs (APL) basketball shoes have been banned by the NBA because they apparently give the wearer a higher vertical and an unfair advantage.  I only have one question.  As a white man, will I now be able to jump? Actually one more question, do I want to spend $300 on them?  Probably not.

In more related sneaker news, I give you Russell Westbrook's Nike Hyperfuse shoe - close up on the logo here 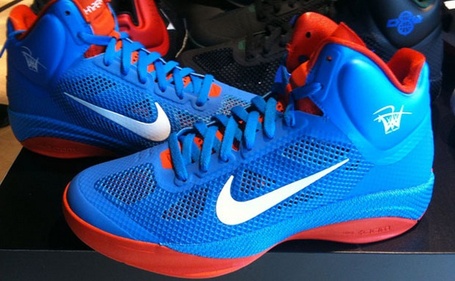