And now, the new age dawns not with a bang, but with a whisper.

For those of you who don't know, I am MVEAlpha, one of the two fine chaps brought in to substitute for DaddyDai in bringing you the Loud Links feature. I say "substitute" because, even though DaddyDai has left for his own personal reasons (and don't ask me what they are, I don't know,) I could never use a term like "replace" to refer to him.

As I sit here writing this, my first Loud Links feature, I'm both apprehensive about doing the job up to Dai's immense standard, but excited to get out there and bring all of you loyal WTLC readers the very best in news, features and general oddities that exist on the Internet about our Oklahoma City Thunder.

While I understand that taking over for such a longtime fixture on WTLC like DaddyDai can be a fairly tall order, I think between me and Fakin we can get those shoes filled admirably enough to walk without falling on our collective faces, although we could never completely fill them.

Alright, enough of that. It's time for your daily dose of Thunder-related links

Durant disputes link to Miami Heat's LeBron James - from The Miami Herald
"Everybody in the media tries to twist things up and say I'm the anti-LeBron," Durant said before Friday's neutral site game at the Sprint Center. "We're two basketball players who love the game. We have the same mind-set, just trying to get better every day. The way [James] handles his business and the way I handle my business shouldn't be criticized or overpublished, I think."

Oh KD. You know I love ya (as a sports fan loves a superstar,) but I wouldn't be going around saying that you have the same mind set as a man who basically went on national television to give his former team the biggest middle finger he could muster just to say he's signing with another team.

A littany of material has already been written regarding LeBron James' actual choice to sign with the Miami Heat, and how he actually went about making (and announcing) his decision, and I personally don't give a flying raccoon about who LeBron plays for. 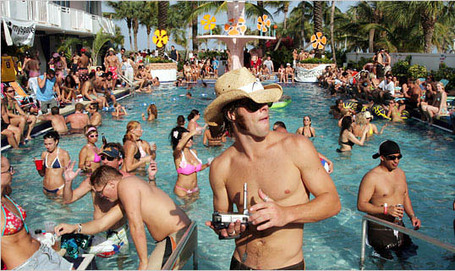 Although, the fact that you can't do this in Ohio in December may have factored in...

The point of the thing, though, is that conduct off the court factors into things just as much as your performance on it. We love you not just because you can put up 30+ points a game night after night, but because you are the consumate sportsman while you're at it. 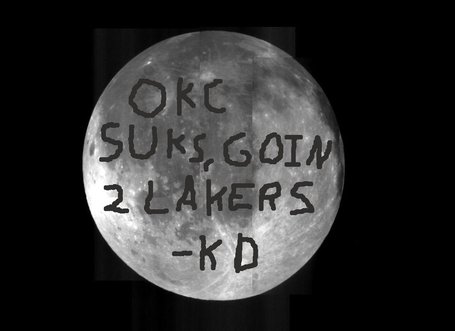 At least we never have to worry about this from Kevin Durant...right?

Grizzlies lack scoring punch- from The Commercial Appeal (Memphis)
"It's been a problem. We're rushing," forward Zach Randolph said. "I think it helped (Thursday night) that we got to the foul line. But we have to work on our offense. We can be sharper." The Griz attempted more than 40 foul shots against the Hawks in part because of a tight officiating crew. Atlanta also shot 44 free throws. Memphis' problems offensively haven't come from a lack of aggression.

As the Thunder tip off tonight against O.J. Mayo and company at the BOK Center in Tulsa, seeing stories like this come out of the land of the Delta Blues to be a positive sign for us. However, that doesn't really mean that the Thunder can send off Cole Aldrich, Tweety Carter, Elijah Millsap and two guys they find wandering the food court and call it a night. 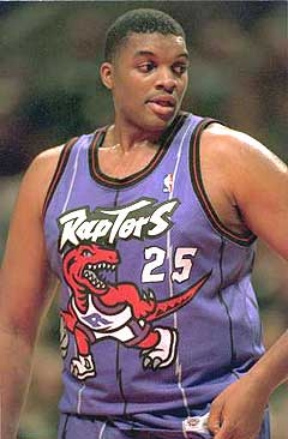 Ten minutes earlier, Oliver Miller was just a random fan getting some nachos...

Despite the advertised lack of true scoring prowess, the Grizzlies remain undefeated thus far in the preseason, knocking off the Atlanta Hawks and the New Orleans Hornets on the road to do it.

Now, as a fan, I say that preseason run of undefeated teams ends tonight. However, I can also objectively say that the Thunder can't sleep through this one. The Hornets got whipped by 7 points by these Grizzlies, even after the Grizzlies started Hasheem Thabeet in place of Marc Gasol (they said it was so Gasol could rest, although he still wound up clocking 26 minutes.)

I always seem to pay extra attention when the Grizzlies come to town though. Guess you could call it a soft spot.

Roy brings NBA to Seattle- from The Seattle Times
Brandon Roy, who probably got a big assist from Nate McMillan, is doing something former mayor Greg Nickels, Howard Schultz and Wally Walker couldn't do - he's bringing the NBA back to Seattle. It's only for one night and it's only a Portland Trail Blazers intra-squad scrimmage, however, it's the first time an NBA team will play in Seattle since Clay Bennett took the Sonics to Oklahoma two years ago.

It's nice that, even if for just one night, there is NBA basketball in Seattle again. Despite all the generally negative encounters I have with Sonics fans online, Seattle is a great city (even my parents live there,) and they certainly deserve to have a basketball team of their own again. Because, quite frankly, even three years after leaving, I think Sonics fans still have some...issues. 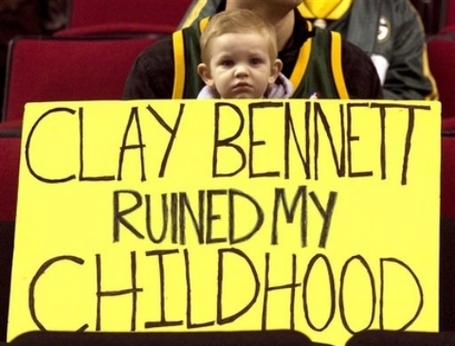 And now, in the "only interesting to me" department, at the end of that last article was a video of Hornets rookie Quincy Pondexter being...introduced during an open practice for the public.

Pondexter was one of the players drafted by the Thunder in the 2010 Draft (along with Craig Brackins) whose draft rights were traded to New Orleans for the draft rights to Cole Aldrich and veteran Morris Peterson.

I'm just going to leave on that note. See you all again Thursday!