There were scares a couple of times, but for the most part, this game was completely in the bag.

Okay, to tell you the truth, I was a bit worried in the first half. Both the first and second quarter ended up following the same formula. The Bulls would start out on a tear, looking like they were the better team. Then, things would equalize for a bit. Finally, the Thunder would finish the quarter strong. After all of that nonsense, the Thunder started the 3rd quarter on a mission, and completely wiped the floor with the Bulls. Apparently, Coach Brooks said something to them at halftime that got them riled up, but I think they knew what they had to do. The Bulls got it to within 10 late in the 4th, but a Westbrook jumper and a couple of KD free throws sealed the deal.

Even though they lost, the Bulls do a much better job of equally distributing the scoring than we do, as the entire starting lineup manged to score in the teens. Nevertheless, it's not much of a feat when the shot 35% from the field, only 2% above their three point shooting percentage, which was 33. But it wasn't the fault of the starters. Rather, the subs, who were mostly in towards the end of the third, combined for 5 of 27 shooting, which works out to be 18.5%. It's no surprise why the Kings got rid of Salmons and Miller, based off of this evidence, and it's also no surprise as to why Tyrus Thomas is a huge factor for this team. For one, the bench is totally worthless aside from him, and for two, when Thomas has a good game, the team performs much, much better. If I were the Vinny Del Negro, I'd pretty much just mix the bench and starters to where no more than 2 bench players are on the floor at once. At times, you'd have Thomas, Salmons, and Miller all on the floor at once, which is just a travesty waiting to happen. I'd also work on, you know, avoiding giving them the ball if they're going to shoot this badly. A one-dimensional offense isn't an ideal situation, but it's better than a no dimensional offense that completely loses you the game. 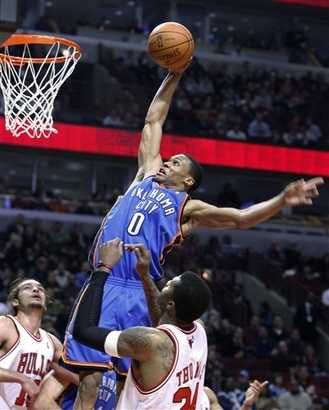 Making awards for this game is difficult, because one has to remove the points earned in garbage time. Sefolosha is especially guilty, because if you take out his garbage points, he has a measly two points. But you can't deny his influence, as both of the Bulls guards had sub-par shooting percentages. Durant and Westbrook also scored a lot in crunch time, but considering the fact that they were the only people who scored a good amount, there's no real shame. Thus, Russell Westbrook with his 29 Points, 7 Rebounds, 6 Assists, and 2 Steals is the Thunder Wonder, and James Harden with 13 Points and 4 Assists off of the bench grabs the Thunder Down Under award. Kevin Durant with his 25 Points, 8 Rebounds, 3 Assists, and 6 Horrible Turnovers can go away, because 6 turnovers is not acceptable! Russell Westbrook continues his conversion into an elite point guard, and completely outclasses Derrick Rose, while James Harden does exactly what he's supposed to off of the bench, especially with his 3 of 5 3 Point Shooting. 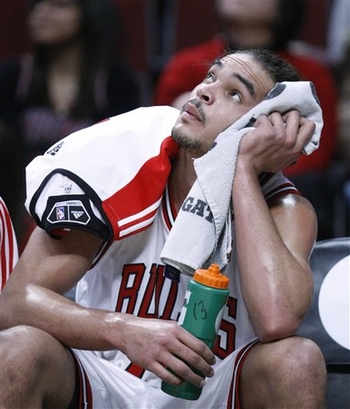 The Thunder Blunder has to be Jeff Green. I know not everybody played their best game, but there were some tough matchups. Jeff Green not only went a paltry 3 of 8 for 6 points, but he lost the trust of Coach Brooks enough to only play 14 minutes. That's a scary thought, and if the next game hadn't been played already, I'd be worried about his future with the team. And, just to wrap things up, I'm naming the Thunder Plunderer as Joakim Noah. 14 Points, 14 Rebounds, lots of energy, and a responsible 6 of 12 shooting. I know, Derrick Rose had a solid game, but he got outclassed by Westbrook, and Hinrich also had a good game, but I just want to give the award to Noah. I think the guy gets an unnecessarily bad rap on and off the court, and he's the guy who I identify with the most in the league, at least emotionally. Just because he goes out there, gives a lot of energy, acts like a fool, and gives huge hugs. Just like I do! So here's to you, Joachim! (Not that he doesn't deserve it, because he shot better than Hinrich, and was a integral part of the early first half runs.)

The next preview is to come within a couple of hours!