This was one of those games that was perfectly set up to end in epic fashion, but it failed to do so. It started out with the Thunder assuming an early lead in the first, much to my surprise. The Thunder were forcing the Mavericks, who were looking incredibly lazy, into bad shots all over the floor. In fact, they didn't score a field goal until a few seconds before the quarter was halfway over. It was a perfect example of how youthful exuberance and energy can sometimes defeat experience. Well, at least, for the first half of this game anyway. The second quarter was, basically, a bunch of damage control. The backups were in, and the thunder needed to make sure the Mavericks didn't attempt to mount a massive comeback until the second half, when the starters would be back out on the floor. And, for the most part, the Thunder accomplished that task. Dirk Nowitzki went off for 10, and Jason Terry had 9, but the Thunder responded by setting up the fresh Harden for some easy jumpers, as well as Durant and Westbrook later in the quarter. It's almost like the Mavericks had a complete lapse in mid-range defense. By the half, the deficit was down to 7 from 11, but the task of keeping the Mavericks at bay was accomplished.

Early on in the second half, the Thunder managed to keep their lead by setting up for reasonable shots, while the Mavericks kept clanking them. But then, the Thunder started to try to focus on the interior offensively again, which is a mistake when Krstic is in the lineup. They started to miss shots, while defensively, the Mavericks were getting easy second chance points off of offensive rebounds. Now, I'm not blaming this on Krstic, rather, I'm blaming it on bad offensive strategy. By the end of the quarter, the Mavericks took a 5 point lead off of a bad pass, and the Thunder barely managed to keep within three on a Maynor near buzzer-beater.

As the fourth quarter dawned, I had a large fear that this was going to turn into one of those games where the Thunder would run out of gas in the 4th against a superior opponent, something which I hate to see. But, after a 9 to 2 Thunder run to put them back up by 4, I knew they meant business. From this point on, the game was very back-and-forth, with no significant runs or leads. The Thunder had found their offense again, but sometimes they would commit stupid mistakes, like a Collison 3 in the key, and a Harden Offensive foul. The Mavericks, meanwhile, focused on drawing fouls, with the occasional jumper.

Eventually, it was tied at 93 to 93, with 1:05 to go. Mavericks have the ball. Kidd dishes to Terry, who dishes to a very well guarded Nowitzki on the baseline. Nowitzki drains the shot, and the Mavs are up by 2. The Thunder get the ball, and there's a very apparent mismatch, as Jason Kidd is guarding Durant. Durant dribbles it into the lane, and misses a very easy shot. Westbrook commits a loose ball foul, and since the Mavs are in the bonus, Dirk proceeds to nail two free throws. 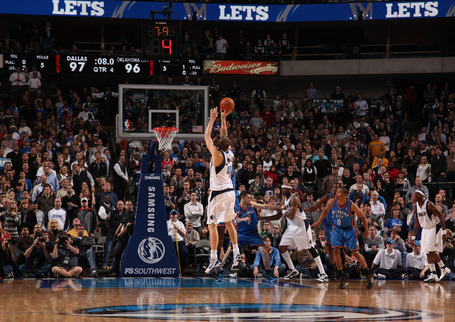 The Thunder get the ball again, down by 4. Durant receives the ball, and immediately gets the and one on a stunning drive to the basket. He makes the free throw, and the Mavericks are only up by 1, with 28.1 seconds remaining. The Mavericks wasted as much time as possible, and then used Nowitzki's height to have him nail another extremely tough jumper. The Mavericks are up by 3, with only 6.4 to go. 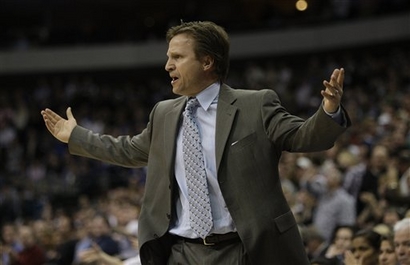 You're telling me I got out-coached?!

Now, here's where the game gets extremely lame, and ends in the worst possible fashion. The Mavs didn't have a foul to give, yet they fouled Durant within .2 seconds. He sunk the two free throws, leaving the Mavericks with the ball and the lead with no shot clock. It took the Thunder 1.3 seconds to foul Jason Terry. He proceeded to miss the first free throw. He then proceeded to....miss the second free throw. Krstic grabbed a rebound (yes, that's not a typo), and attempted to pass it to Westbrook. The pass was deflected by Howard. Krstic grabbed the ball off the deflection and passed it to Westbrook again, but now we're looking at 2 and a half seconds for Westbrook to get the ball down 3/4ths of the court. He put a spin move on Jason Terry, and shot it from well-beyond the half court line. The shot was long, and the Thunder had lost, in a horrible way. I just hate it when circumstances force the Thunder into an unmanageable situation. Granted, they essentially lost the game when Durant missed a crucial shot against Kidd, but they just got out-coached with superior strategy at the end. There was almost no way for it to work. For it to work, you'd have to see a shot like this one. (Oddly, it's almost exactly the same situation we were in tonight.)

But, now, it's time to go to the analysis. The Thunder did everything right they needed to in order to win this game, but in the end, Durant missed an easy shot, whereas Dirk made two difficult ones.

And I'd just like to say that while Krstic isn't winning any awards today, he didn't have an entirely bad game. He hit over half his shots, and he grabbed 4 rebounds, one of which was crucial at the end. I think that the little negative he did commit came at crucial times in this game, and that's why he came off as looking unnecessarily bad. In the end, it was only 1 turnover, and Dampier only had 6 points himself. Not great, but not bad either.

The main Mavericks instrument in the Thunder loss, and the Thunder Plunderer for tonight, comes as no surprise, as he's Dirk Nowitzki. There's just no stopping this guy offensively. Jeff Green would often defend him as well as he could, but oftentimes he'd just be too short to provide a significant detriment to his shot. Jeff Green fails against the big men again, and has a horrible shooting percentage while doing it. A Thunder Blunder performance if I've ever seen one.

Contrastingly to the Thunder Plunderer, the Thunder's Thunder Wonder is someone you'd never expect. That's right, it's Nick Collison! I might get a lot of flak for naming this guy the Thunder Wonder while defending Krstic, but give me a chance to explain myself before you jump overboard. First of all, I said Krstic was serviceable, not excellent. Second of all, who else am I going to give it to? Kevin Durant had a horrendous 8 Turnovers, James Harden didn't fill up the intangibles or defend nearly as well, and Russell Westbrook did good, but not great. As far as expectations go, Nick Collison exceeded those expectations a lot more than Russell Westbrook did. 10 Points, 4-7 Shooting, and 10 Rebounds round out his offensive night, and the lack of Dampier and Gooden round out his defensive night. Likewise, Russell Westbrook gets the Thunder Down Under Award, for performing as expected within his role. 18 Points, 4 Rebounds, 6 Assists, a high 4 Turnovers, 2 Steals, and 1 Block round out his stat-filled night.