Q&A Session With "House of Sparky" About James Harden

Share All sharing options for: Q&A Session With "House of Sparky" About James Harden 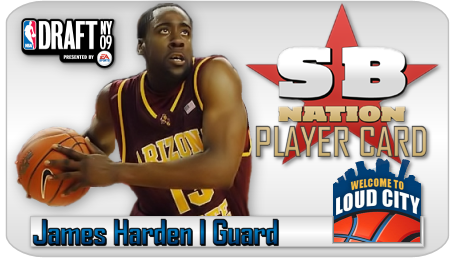 As I promised on the B.J. Mullens article, we interviewed Cory from over at House of Sparky (the SBNation Arizona State blog) about new Thunder rookie James Harden. I asked him 14 questions, and like a champ, he responded to all of them with fairly detailed answers. So, if you comment, make sure you give a big thanks to Cory, or mosey on over to House of Sparky and check out their blog! Without further ado, here's the interview:

WTLC: Thunder fans have been hearing a lot lately about James Harden's talents, but we haven't heard much else about him. Could you shed any light on what kind of a person, or teammate he is?

James Harden is a strong team player, giving his supporting role players plenty of opportunities to showcase their talents. His passing abilities are extremely understated, and I believe that his vision on the court will translate very well into the NBA, where his teammates will all be more athletic than he is.

He's a relatively quiet person, and I have never seen him out at social functions, parties, or formals. While I have seen other ASU athletes partaking in the school's revered party scene, Harden has remained focused on basketball.

WTLC: What are the best parts of Harden's game?

Unselfishness. Court vision. Tenacious on defense when the moment calls for it. He scores in bunches, utilizing his left hand to great effect. Fact of the matter is, Harden's handedness allows him to go places that most players would rather not go.

Defenses struggled with his craftiness during his freshman season, but by the midway point of his sophomore campaign, players were wise to his tendencies, and caught onto the angles they needed to take against James.

12 more questions after the jump!

WTLC: Are there any recent prospects that have come out of college, or any current NBA players, that would be relatively comparable to Harden?

Harden's an up and coming talent, and I believe his best work is still forthcoming. That said, the common comparison is Brandon Roy, but I'm not necessarily buying it. I like to compare him in some ways to Gilbert Arenas.

Harden's handle is not of Arenas' caliber, but with practice and a sincere desire to succeed, Harden could achieve a Scottie Pippen-like status, where his talents perfectly complement the superstar that is Kevin Durant.

WTLC: Harden was a 5-star recruit coming out of high school. He was recruited by many top programs. Do you know what made him choose Arizona State over the other programs, especially after the Sun Devils went 8-22 the year before he arrived?

ASU Coach Herb Sendek knew he wanted James Harden from the second he stepped onto the Tempe campus. The Sun Devils were mediocre at absolute best, having but one serviceable player in Jeff Pendergraph.

In order to lure a top prospect from California into the desert, Sendek had to be very resourceful. He began by bringing in Harden's head coach, Scott Pera, as an assistant coach for the Devils. Next, he gave the unheralded Derek Glasser a scholarship to play point guard. Glasser, at the time, was planning on becoming a walkon at USC, but Sendek knew what he had to do.

Harden was then faced with a very attractive situation: his former head coach, and his former point guard were waiting for him at Arizona State. In my mind, there wasn't much discussion about the matter, and Harden went where he would be very, very comfortable. It was Sendek's commitment to Harden that brought Harden's commitment to ASU.

WTLC: It's difficult to gauge defensive ability for a prospect coming out of college, unless you've seen him play a lot. We're aware that Arizona State played a lot of zone defense, but is Harden a good defender?

The guy can envision the offense he is guarding against, and makes the proper adjustments. Can he shut down Dwayne Wade? Absolutely not, not yet. I have seen him make great defensive plays against very adequate Pac-10 competition, from steals to help defense that stopped easy baskets from being converted.

I doubt he will be a great defender, but he's a hard worker, and I wouldn't put it past him to be a valuable asset on both ends of the floor.

WTLC: Does Harden have a favorite shot - a shot that he seems to put up more often than others during the game?

This is tricky, because the defenses gave him the three pointer more and more as the season went on. He can hit the three, but unfortunately for you (and the next question) his 35.6% from long distance may not transfer particularly well to the next level as a rookie.

WTLC: The Thunder need another player to stretch the defense - a perimeter threat. What is Harden's range and how is his perimeter game offensively?

With hard work, he can become this threat. He's not Michael Redd, but he's well rounded. I can't say for certain that he has any type of shot that impresses scouts or pundits any more than another, but he goes strong to the basket and has been working on his midrange game.

From three, in time I believe he will attain a 35% average, with a possibility for 37-38%. His shot just isn't there yet.

WTLC: Someone on a scouting site described Harden as "business on and off the court". Would you say that's accurate?

As I mentioned earlier, I have never seen him as a particularly outgoing person. He is reserved and enjoys to let his game speak for himself. There has never been a negative story about Harden on ASU campus, and he studies the game. Herb Sendek did a good job with him, and I believe he will be prepared for camp. 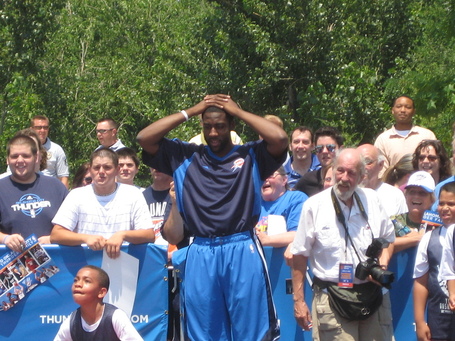 WTLC: A big knock on Harden is that he disappeared in the NCAA Tournament. Would you have any idea why that happened?

Temple and Syracuse knew their mission: shut down James Harden. That was the memo sent out across this great nation, the briefest scouting report known to man. ASU is notoriously thin at all positions, with Harden the sole exception. Pendergraph cannot lead a team to win a NCAA Tournament game, but he's a solid big man.

Against Temple, if it weren't for Glasser, ASU would have dipped out in the first round. Harden has had trouble developing a move that is unstoppable, and the defenses of the NCAA have learned that over the course of advanced scouting during the season.

On the other hand, we have no idea if Harden was going through any type of personal troubles during the NCAA Tournament. I certainly hope this is not the case, but we can never rule out that, considering he is still just a young man.

WTLC: Obviously the Thunder have some other talented young players. How does Harden work to complement his teammates on the court?

Passing. Even with the talent he played with in Tempe, Harden dished the rock. With great young players such as Jeff Green, Harden will find himself distributing the ball and finding his own game amongst the core of talent you currently have.

WTLC: What makes Harden special enough to be drafted in the top 5?

There's a lot of players that could have deserved that title, but Harden's game is so sound, and his body is NBA-ready. He shed 15 pounds after the season ended in preparation for NBA tryouts, and he has potential tattooed across his forehead.

He's not a guarantee to become a superstar, because he plays a deliberate style of basketball that is not flashy, and can at times be uninspiring. But he makes his teammates better, and with great young players around him, he will live up to the billing of a "Top 5" talent.

WTLC: Let's say there's a Thunder fan out there that's skeptical of Harden. Maybe they wanted Rubio or Curry. You have at most three sentences to catch their interest in Harden. What would you say?

Harden scored 20 points a game, shooting 50% from the field while leading his team nearly singlehandedly to the second round of the NCAA Tournament. He brings out the best in his teammates, and can see plays as they develop, which may lead to highlight reel dunks for Mr. Durant.

WTLC: How do Arizona State fans feel about Harden going to Oklahoma City? Would it have been any different if he had gone to any of the other teams in the top 5?

ASU fans are excited to see him get drafted ahead of Ricky Rubio. We knew what we had all along, and we're very sad to see him go. But to play with Durant and Green? That will be something exciting to watch, and I will check up on him frequently to assess his progress.

WTLC: Finally, any funny or cool stories about Harden that you know from his time at Arizona State?

Against UCLA in Los Angeles back in January, Harden knocked down a pair of free throws as regulation drew to a close to bring the game to overtime.

Harden and ASU played an incredible brand of defense during this game, holding UCLA scoreless for 13 minutes, a span that stretched from regulation partly through the 5 minute overtime period.

In the end, Harden led the team to the huge upset victory, 61-58. He dropped 24 points, and this win put ASU on the map as a legitimate squad in the Pac-10.