In order to appreciate the highs, one has to experience the lows. That's how the saying goes, or something approximately similar to that. On December 4, 2008, after a 6-point loss, most news stories about the Thunder read something like this one:

Oklahoma City lost to Charlotte 103-97 on Wednesday, dropping the Thunder to 2-17 on the season and putting them in a rather undesirable position as the season nears the quarter pole. At this rate, the Thunder will finish with a record of 9-73, which would tie them for the worst record of all time. [...] Certainly, the "worst team ever" label is within the realm of possibility based on how the Thunder have played so far.  --John Hollinger

Now I'm sure some of you are asking, "Dimes, what gives? The title says 'Building A Winner'. Why are you reminding me about that bleak time in the young franchise's history?" But if I told you that a team was "so terrible" as to merit consideration for "worst team ever", wouldn't you be surprised to learn that team was one of the league leaders in attendance figures?

Indeed, the Oklahoma City Thunder finished the 2008-2009 season 11th in the NBA in attendance, averaging 18,693 fans per game - the 4th highest total for a non-playoff team. This all occurred despite Oklahoma City only being the 36th largest TV market nationally, and the 44th largest metropolitan area nationally. The approximately 1.2 million people that live in the Oklahoma City metro area puts it just behind Richmond, Virginia and Louisville, Kentucky in terms of population.

So, obviously, the fans in Oklahoma City can tell that the franchise is "building a winner", or they wouldn't be repeatedly shelling out the money to attend games.

The "honeymoon" period will eventually end with fans in a new city, but the trends are certainly promising. The Thunder began the season winning only 3 games in 32 tries, and finished the season winning 20 games in 50 tries. Their increase in winning rate was a 427% boost. With a new coach, more confidence, and better teamwork, the Thunder were putting a more entertaining product on the court at the end of the season, and this improvement kept the fans coming to the Ford Center. Actually, the attendance figures appear likely to stay high, given this report from June 10, 2009:

Senior vice president of ticket sales and service Brian Byrnes say Wednesday the team is thrilled with the renewal rate of about 83 percent, considering the state of the economy.

But of course, attendance figures are only a part of building a winner. Obviously, a team will want a great atmosphere - a packed house with lots of engaged fans. The Thunder have more going for them than just great fans, though. 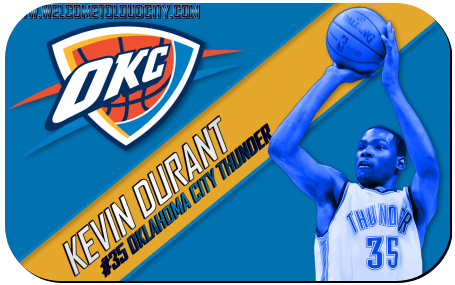 The Thunder also have a talented core of young stars, and a young, intelligent general manager who seems to be making all sorts of great decisions. They have the benefit of having a young star player to build around - a guy who can be "the guy". Kevin Durant has had an amazing first two years in the NBA. For comparison, in his first two seasons, Lebron James scored 3829 points, whereas Kevin Durant scored 3495 points - slightly off James' pace, but very impressive nonetheless.

There was an article in ESPN the Magazine awhile back about the Thunder, and it stated that Kevin Durant's early career was relatively similar to Kobe Bryant's, and statistically Kobe Bryant was one of the closest matches for Kevin Durant. Indeed, over their first two years starting, Bryant and Durant only had about a 7% difference in their points per game trends, shot a similar percentage (46%), and obviously were a key part of their team's offenses with usage rates close to 30%.

Sam Presti has also managed to surround Durant with other young, talented players as well. Russell Westbrook was pegged by many draft experts as a mistake immediately following the draft, but he quickly had them changing their minds as he tore up the Orlando Pro Summer League in 2008. Westbrook has promise as an elite point guard who could be one of the best slashers in the league - he just needs to control his turnovers.

Jeff Green holds promise at the power forward position, and he was the second leading scorer and rebounder on the team in the 2008-2009 season. James Harden has been recently added to the young core through the 2009 NBA Draft. Harden has been described as a "scoring machine" who is "business on and off the court", and he should fit right in on the Thunder squad.

This formula works in the NBA - finding a star who has room to grow, and surrounding him with very talented players and role players who fill a specific niche. Right now, Sam Presti is in the process of adding young players and determining which ones will fit alongside Kevin Durant. Once he has that figured out, and the appropriate contracts signed, then he'll work on signing veteran role players and plugging in the holes.

Some people have got to be wondering why Presti has been so reluctant to dabble in the free agent market this summer. One possible explanation is that he wants to save money for the expected huge 2010 NBA free agent market:

It has been whispered about within certain circles for years.  It has been the genesis of infinite message board threads from coast-to-coast since as far back as 2006.  And it has grown in both stature and mystique with each passing month.

Yes, we are talking about the epochal, mythical, seminal Summer of 2010, aka The Summer of LeBron.

In fact, I'll go out on a limb and assert that 2010 will not only represent the greatest free-agent class in NBA history, it is arguably the greatest FA class ever, in any of the four major sports.  There may be upwards of 10 Hall-of-Famers up for grabs at one time.  You tell me the last time that happened, in any league.

Of course, the other possible explanation is that Presti doesn't want to overspend for a guy who will likely just be a role player, rather than a star, on a team with budding stars in Durant and Westbrook. Sam is going to have to pay Durant, Westbrook and Green handsomely in the near future. If Presti is a penny-pincher for the time being, he'll be able to afford the popular young players that draw out fans in droves right now. Then, he can simply plug in the holes.

Durant and Green will be retained next summer likely by exercising the "team option". It will keep them in Oklahoma City for another season on the cheap (a combined $10.5 MIL). However, in the summer of 2011, they will become restricted free agents, and that is when Oklahoma City will need to begin dishing out the cash. Fortunately for the Thunder, as of right now, they only have $15.22 MIL on the books for the 2011-2012 season all in the form of team options on young players like D.J. White. This enormous flexibility will allow the Thunder to sign the guys they want to keep, and staying out of the free agent market right now keeps them from mortgaging their future.

One thing is clear, Sam Presti seems to know what he's doing - and to this observer, it appears like he's building a winner. Most fans in Oklahoma recognize this, and that is why they are supporting the franchise. With an avid fan base, a talented young core that is the envy of the league, an excellent organization, and a lack of bad contracts weighing down the franchise, the sky is the limit for the Thunder.