Reasonable Expectations For The 2009-2010 Season

Share All sharing options for: Reasonable Expectations For The 2009-2010 Season

After seeing a detailed FanPost by TheNBAScoop and a well-written article by Darnell Mayberry over at the Oklahoman, I decided to tackle the topic of whether or not the Thunder have a shot at the playoffs next year. Admittedly, after seeing these two headlines, my reaction was something like the infamous Jim Mora reaction:

But, to be fair, NBA teams have had some crazy ascensions to the playoffs over the course of one offseason. The one that immediately jumps to mind is Boston going from a 24 win season in 2006-2007 to 66 wins and a title the following season, but this involved the Celtics acquiring Kevin Garnett and Ray Allen. Perhaps the most comparable scenarios were the Chicago Bulls of 2004-2005, and the Memphis Grizzlies in 2003-2004. The Bulls went from 23 wins to 47, and did this mainly by drafting a couple of talented players. The Grizzlies had only a couple of changes to their roster, but improved their record by 22 wins.

So, this seems like a somewhat credible scenario. Even Kevin Durant seems to think so, as he has been quoted as saying:

"Anything less than the playoffs is a failure for us"

This is a pretty bold statement, but I think it's refreshing to see a confidence on the team. It reminds me a bit of the Milwaukee Brewers and Tampa Bay Rays from major league baseball who managed to break long playoff droughts last season. Both of these teams managed to get there on the strength of their farm systems, and confident young stars like Kevin Durant. However, confidence and results are two different animals. There are some big hurdles that the Thunder will have to leap in order to reach the playoffs.

I break down the situation after the jump!

Like it or not, the Thunder won only 23 games last season, which put them 25 games out of the 8-seed in the Western Conference playoffs - a deficit that exceeded their win total. Of course, the numbers need a bit of context, as the Thunder started the season an abysmal 3-29 (.094). That was largely due to inexperience, coaching turbulence, and an unsettled lineup. 32 games into the season, there was talk about the Thunder breaking the all time worst record. However, things started to turn for the Thunder, and they finished the season 20-30 (.400). If the Thunder had played .400 ball for the entire season, they would have had a final record of 33-49. We'll use this as the baseline for next season's projections.

Also to be considered is the win total necessary to get into the playoffs. 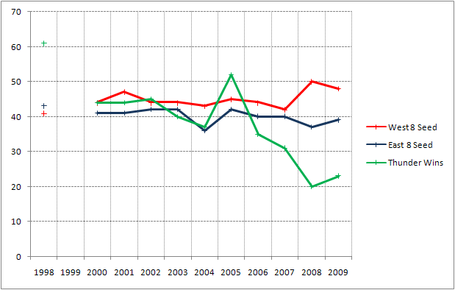 The strike-shortened 1998-1999 season is not shown above. Overall the average number of wins for the Western Conference 8 seed over the past 11 years has been 44.7 wins. Recently it has been much higher (50 and 48 wins over the last two years). This kind of production among half of the teams in the conference is not likely to be sustained long term. Eventually, this will probably regress to the average. I won't project an 8-seed win total of 45 wins (11-year average), but we'll drop it down to 46 wins.

This means that, if these two assumptions are true, the Thunder would need to find a way to make up 13 wins in a highly competitive conference, and division. Is it possible?

There are 9 highly competitive teams in the Western Conference: LA Lakers, Denver, San Antonio, Portland, Houston, Dallas, New Orleans, Utah, and Phoenix. All of these teams had at least 46 wins last season. It's unlikely that the Lakers or the Nuggets will fall out of the playoffs next season, barring significant injuries. Portland is a young team that has a ton of talent and didn't lose any major pieces. It's also tough to see them falling out. San Antonio made some shrewd offseason moves and now have Richard Jefferson and DeJuan Blair. Therefore, the top four teams in last season's standings are likely to remain in the playoffs.

Phoenix is expected to fall back. They dealt Shaq (pictured left) to Cleveland for Ben Wallace (who lost some effectiveness last season) and Sasha Pavlovic (who didn't get a whole lot of playing time last season). They don't have a guy who jumps out to start at small forward, as Richardson is more of a shooting guard. Still, they have a lot of talent, and any team with Steve Nash is going to be dangerous. Phoenix posted a win total of 46 last season. Any fall back would open the door for another team to jump up the Western Conference standings.

Houston was dealt a blow by the Yao Ming injury. This leaves them without anyone taller than 6'9" on their roster. They managed to sign Trevor Ariza, and they proved they could win in this last season's playoffs without Yao Ming. The Rockets won 53 games last season, so prospective teams in the bottom half of the west are going to need Houston to fall back probably a significant margin of 8 games or more.

The Thunder play in a very competitive division, the Northwest, and it included three playoff teams last season - Denver, Portland and Utah. All of these teams are expected to remain competitive next season. The final team in the division - the Timberwolves - has had a very active offseason, but one has to wonder if they opened up a couple of holes on their depth chart by trading some talent at the shooting guard position, and drafting purely point guards.

Have four teams ever qualified for the playoffs from one division before? Yes. Last season, as a matter of fact. San Antonio, Houston, Dallas and New Orleans all qualified from the Southwest division.

The Thunder went 4-12 against their divisional foes last season, the third worst mark in the entire Western Conference, and tied for the fourth worst in the entire NBA. They do play in a competitive division, but this is an area that they must improve if they want to make the playoffs. They managed to break even against the Timberwolves last season (2-2).

Is there a scenario that you can imagine where the Thunder make the playoffs?

Of course, I'm assuming that everything goes the Thunder's way - no injuries, great performances, luck, and slides by two other Western Conference teams. The fact remains that they only had 23 wins last season, they still don't have an interior defensive presence, they still lack a major veteran presence (something that was usually present on most of the teams that made big jumps in one season), and they are still relatively inexperienced.

I don't mind Durant setting his sights high, but I would be pretty surprised if the Thunder can make the playoffs this season. I think a mild improvement from their last-50-games pace can be expected. They'll probably have a win total somewhere in the mid to upper 30s, and be set up for a playoff run in the 2010-2011 season and beyond.

In order to make the playoffs, I think it would require a shockingly good rookie season from Harden, a mid-season deal for a big man who can patrol the lane as a defensive presence, and an MVP-like performance from Durant, not to mention defensive improvements across the board. Let's not forget that the Western Conference elite is stocked with teams that have veteran rosters, star power, and are used to consistent winning.

I'm not saying the playoffs are impossible, and I certainly don't want to keep you from dreaming big. However, the point is that expectations for the 2009-2010 Thunder should be mild improvement, not the playoffs. But hey, crazier things have happened, right?