Share All sharing options for: Pleading His Case: Serge Ibaka 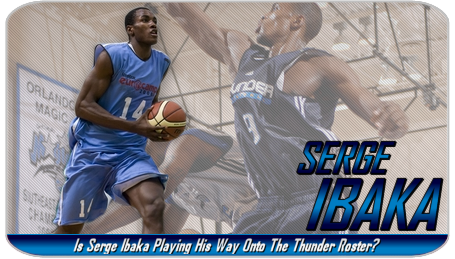 The Oklahoma City Thunder finished out play for the Orlando Pro Summer league on Friday, and I came away with several thoughts. The three biggest things I walked away from the OPSL thinking were Russell Westbrook is already too good for Summer League, James Harden was a phenomenal choice that improved this team the instant his name was announced, and Serge Ibaka is pleading his case to cross the pond this year. The biggest surprise of those three to me is the last, so for that reason, he's going to be the focus of this post. If you watched the summer league games from Orlando, you probably already know about this kid, but if not, take a minute and read the paragraph below for a little background on the kid from the Congo before making the jump and see why he is pleading his case to join the Thunder for the 2009 Season.
Serge Ibaka is a 19 year old (will turn 20 before the 2009 season) power forward from the Congo. He was drafted by the Seattle Sonics with the #24 overall pick in the 2008 NBA Draft. He spent last season playing overseas for Ricoh Manresa of the Asociación de Clubs de Baloncesto (ACB), which is the premier basketball league of Spain. In 31 games last season for Ricoh Manresa, Ibaka averaged 7.1 points, 4.5 rebounds, and 1 block during his 15 minutes of playing time per game. Although they don't look it, those are pretty impressive stats, especially when you consider he was so productive in just 15 minutes per game. So lets say he were to have played 30 minutes per game, it would probably be a good bet that he would have finished with something like 10-15 ppg, 8-10 rpg, and with a couple blocks, not bad production at all. But how did he do in this weeks summer league? Were his numbers better than those from overseas? Did he put himself in position to become part of the Thunder this season? Make the jump to find out...

In four summer league games with the Thunder, Ibaka averaged 12.3 points, 3.3 rpg, 0.5 apg, 1 spg, 1.5 bpg, in 22 minutes per game of playing time. Those numbers, if translated into 48 minutes would look like 26.4 ppg, 7 rpg, 1.1 apg, 2.2 spg, and 3.2 bpg. Those are pretty impressive numbers, which of course wouldn't be nearly as high against everyday NBA competition, but that's beside the point. The point is, that he's playing even better than most expected him to during the week of play. When people refer to Ibaka, its usually followed by the term "Raw" when describing his talent and ability to play the game of basketball. What we saw during this week was a much more refined basketball player than we expected to see.

For a player of his size (6'10"), he ran the court unbelievably well, I mean seriously, this guy can run up and down the floor with guards and not lose a step. That's a tremendous asset to have at the power forward position, especially for a young team that has already shown how much it enjoys to run the court. Ibaka, if he continues to progress into what very well could be our power forward of the future, might be the perfect running mate for Russell Westbrook on fastbreaks for years to come. Both are tremendously quick and very explosive, which during fast breaks will combine Ibaka's tremendous leaping skills, and ability to finish above the rim with Westbrooks ability to draw attention and toss up a pass for an easy two points. Sure, Westbrooks assists totals during his rookie season left a lot to be desired, but with a few more years at the position under his belt and guys like Ibaka running the floor with him, those totals could skyrocket into double digit averages as this team continues to grow and evolve with more threats and greater dimension on the offensive end.

But that's not to say that he isn't equally as valuable on the defensive end. In those extended 48 minute totals above, he'd average just over 3 blocks, and 7 rebounds per game. In all honesty, the blocks total is more impressive than the rebounding total, but as he continues to learn and grow (and hopefully bulk up just a bit) those rebounding totals should go up. He's got a tremendous wingspan that he'll be able to use along with his atheleticism to annoy defenders on a regular basis. If he does add say 10-15 pounds of muscle over the next year or so, he could really become a major defensive presence in the middle for this young Thunder team. The biggest question mark there is, can he maintain his unbelievable hops and quickness with another 10-15 pounds of muscle on his body. Who knows, but if it gives him the ability to be more physical in the post, its worth looking into.

While his spot on the Thunder next season wouldn't be a major role, it could be entirely beneficial for his development. First off, the Thunder will play 82 games compared to just the 30 or so that he would play overseas. Secondly, he was only averaging 15 minutes per game last season, and the Thunder can easily match, and maybe exceed those minute totals, depending on how they use him in the rotation. Even if its only 15 minutes a game, during an 82 season, he'd be able to advance far more here than he would overseas. Reason being he'd still be more than doubling his playing time even though his minutes would be the same, because of the season length in the NBA compared to the ACB. It would also give him a chance to begin developing that rapport and trust with his teammates while they are all still young and developing together. It could also allow them to get him even more playing time by moving him back and forth to the Tulsa 66ers to take those minutes and put them to about 35 in an attempt to further his development.

All in all, Ibaka has been impressive, and although he's still a work in progress, I assure you the Thunder scouts are going to be working overtime during the next week (Las Vegas Summer League) to get a better idea of where exactly Ibaka is, and whether or not they are ready to bring him to the NBA and the Oklahoma City Thunder. In fact, perhaps Ibaka is the reason the Thunder haven't been active in free agency, as maybe they would like to decide on Ibaka first before making any commitments to free agent big men. I'm curious to see how other Thunder fans feel about Ibaka coming to OKC this season, and whether or not we may be looking at our future at Power Forward now.