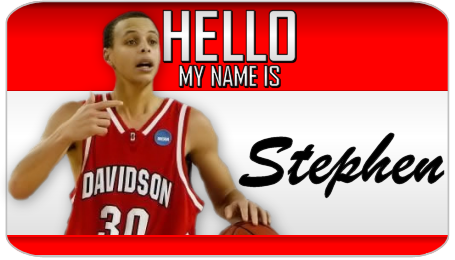 Hello, my name is Stephen Curry. By now, you should know all about who I am, but just in case you don't, I'm here to tell you a little about myself and why the Thunder should select me with the #3 overall pick in the 2009 NBA Draft, which is set to take place at the end of the month (June 25, 2009). Before I get into any specific reasons, you might already be questioning the Thunder taking me with the #3 overall pick, especially when I'm projected to go much lower. In regards to that, all I have to say is look at your own roster, and more specifically, Russell Westbrook, who was taken with the #4 overall pick last season, and taken much higher than he was projected. From what I can tell, Thunder fans seem to be pretty happy about that choice, so if Sam Presti decides to take me with the #3 overall pick, please reserve your judgment until you see my game.

I'm not going to beat around the bush here, you know what this team needs more than just about anything right now, and that's a deadly accurate shooter. There is nobody in this draft who can out shoot me. It doesn't matter if I'm covered tight, coming off a pick for a catch and shoot, or having the ball kicked out to me for a spot up 3 pointer, I'm going to knock down shots... big shots, and lots of them. I have a consistent quick shot release that makes it easy for me to get a solid shot up under pressure, on the move, or if the defense has lost their minds, all alone. When you look at the Thunder roster, and then take a look at my shooting ability, there is an even bigger reason to draft me with regard to my shooting ability. Take the Jump to find out what I'm talking about.

I'm talking about Kevin Durant. I don't think anyone questions the high caliber of his scoring ability, and when you inject my shooting ability into this offense, teams will have to pay so much attention to me defensively (or I'll destroy them), that Kevin Durant will have a field day each and every night, more so than he already does. The beauty of that is, I'm used to having teams put tremendous amounts of pressure and focus on me defensively and am still able to get shots up with deadly accuracy. So if teams want to focus on stopping Kevin Durant, it'll open me up to score at will, which will force them to change their defensive focus over to me. That's when Kevin will really have an opened up floor to do with what he will. I will provide the damned if you do, and damned if you don't scenario on a nightly basis for teams defensive game plans.

Bringing me in at the point will allow Scott Brooks to move Russell Westbrook back to the two, where I believe his game will flourish, especially with me at the point. I do have some work to do over the next couple of seasons to become a better manager of the offense, but don't think because I have some work to do that I'm not a great passer. I can pass the ball better than anyone in this draft and I believe working with a bunch of young talented guys like the Thunder have put together, will allow me the opportunity to grow into a well rounded point guard as I become acclimated with the team and offense. Once that happens, I believe Russell Westbrook's game will improve leaps and bounds, especially when you consider the defensive focus teams will have to put on myself and Kevin Durant. When you think about it, my presence on the court will instantly take defensive pressure off of everyone else on the team. Even a guy like Jeff Green, playing the power forward position should be able to benefit as opposing teams will have to use forwards to try and contain Durant since both guards will already be overwhelmed when trying to guard both myself and Russell Westbrook.

Defensively I have some work to do as well, but I am a solid defender already and do a nice job of keeping defenders in front of me. I don't take a lot of chances on the defensive end but I am still crafty enough and use my hands pretty well, which allows me to pick off a few steals per game from my opponents. I'm not a lockdown defender, but with Russell Westbrook on the floor at the same time, it will allow Brooks to shift us around on the defensive end so that RW0 guards the players that will cause too large of a mismatch against me, just as long as the opposing 2 guard is someone I can handle defensively. What I'm trying to say is I may not be a lockdown defender, but I'm still capable of playing solid defense (After all, I am only 6'2" & 180 pounds). Playing alongside another young, up and coming guard, like Westbrook, can also help my development on the defensive since it's something he is so good at.

So there you have it, Stephen Curry is your guy at #3, and even Sam Presti decides to trade down with the #3 pick, he should keep his eye on me, and trade down to a location where he can still draft me, in addition to adding whatever else he is able to gather from the team trading up to take that #3 overall pick. Remember, Presti isn't afraid of taking a guy like me with the #3 overall pick, RW0 can attest to that. Thanks for reading, and by all means, lobby for the Thunder to draft me. Still not convinced? Check out some of my Youtube videos below.

***This article not written by Stephen Curry***