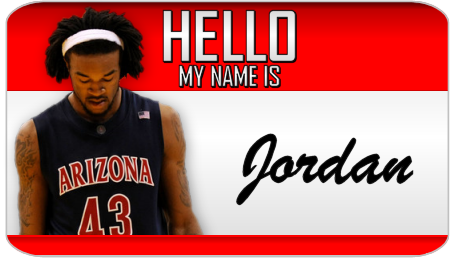 Hello, my name is Jordan Hill, and that's me pictured above. I look a little dejected up there don't I? Well, why do you suppose that is? I'll tell you why, because in the last month I've gone from being discussed as a likely candidate for the Oklahoma City Thunder to almost becoming an afterthought here lately. When I look around the internet I see all this talk about the Thunder wanting James Harden, Hasheem Thabeet, Ricky Rubio, Demar DeRozan, and even Stephen Curry. When the hell did I get so far out of the mix? So just like the others before me (Hasheem Thabeet, James Harden, Ricky Rubio, and Blake Griffin), I'm stopping by to take a few minutes and explain to you why the Oklahoma City Thunder need to spend their #3 overall pick on me, Jordan Hill, power forward, out of the University of Arizona.
I'll start by talking about what the draft is all about, and you can of it what you want, but I'm talking about Upside, and I have a ridiculous amount of it. One thing is clear when you read blogs, forums, and sports sites in general with regard to the draft, and its that people are sick of their teams making picks based on "upside" alone. Truth be told, when you look at the history of the draft, every year is filled with busts and stars in varying degrees of success and failure throughout. There is no rhyme or reason to it, and making a pick based on upside can be compared to making an investment, or buying stock, if you will. Its what the draft is all about really, you do your research and in the end you purchase the stock that you feel can benefit you the most, over a certain period of time. When I say I have upside, its because although I'm ready to be a top 5 pick in this draft, I still have a TON of room to grow. Some might even say that I have the most amount of room to grow out of any of the top five picks, and the scary part about that is that I've been pretty successfull already have averaged 18 points and 11 rebounds this past season at Arizona.

But you want to hear about my play on the court don't you? Where should we start? How about on the offensive end where I believe I'll be able to offer something in a power forward that will afford me quite a few mismatches, and that's my quickness and ability to attack off the dribble from 12-15 feet out. I'll be able to get passed defenders and finish with a powerful dunk, or a runner in the lane. I can also knock down the 18 foot jumpshot when my stroke heats up. My quickness and shooting range allow me to play inside and out while using a variety of different tactics to position my defender in a place that benefits my teammates or myself to setup a scoring oppertunity. While those are some my good qualities offensively, I do have some work to do in regards to my post game. I lack strength to back down bigger defenders, and I will also need to develop some better post up moves to become the player this team will need down the road. But I also attack the glass relentlessly and can pull down more offensive boards than anyone currently on the team or anyone likely to be picked in this draft.

The biggest reason the Thunder need to draft me though, is defense. Its no secret that the Thunder are trying to develop a culture of defense, and I'm the guy who can help take this team to the next level. Last season I bulked up a bit which helped to allow me to control the paint better and gave me an opportunity to block shots on a more consistent basis, and I ended up averaging nearly 2 blocks per game this past season. Controlling the paint also puts me in a much better position to grab rebounds with authority and I was able to pull down nearly 7 defensive boards a game to go with 4 more on the offensive end. Yessir, I am already a rebounding machine and I'm only going to get better as I continue to develop my game over the next several seasons. When it comes to rebounding, I'm relentless, I get my motor started, and I keep it going until I get the board, or do everything I can to put myself in position to grab the board. I do all of that while keeping my defensive fouls in check, and over the course of the last season I was able to limit my personal fouls to just 3 per game.

Anytime anyone starts a discussion about me going to Oklahoma City, the Jeff Green discussion becomes part of the argument, and while I think Jeff is a great player, I'm going to lay it out for you like this. You are trying to build a championship caliber team from the ground up, correct? Well I think we can all agree that Jeff Green is a natural 3, and for him to flourish in this league, and fulfill his true potential, he's probably going to have to make the move back to the 3 to do that. When that happens, it'll likely be for another team because Kevin Durant is likely to stay cemented at the small forward for the Thunder for as long as they can keep him around. So by adding me, you can pencil in your power forward of the future, and also keep Jerff Green around to showcase his skills for a potential trade to add another piece of the puzzle late. Jeff Green, although not widely talked about, is a guy with a pretty high value attached to him, and by drafting me, Green could even be traded for a star caliber shooting guard that cash conscious teams won't mind unloading for a young Jeff Green.

So that's it, I just wanted to take my opportunity to say, Hey! I'm still on the board, and don't underestimate my potential. I'm already a top five caliber player, and I have more room to develop than just about anyone else in this draft. I'm a hard worker, a hustler, a defensive minded player, and a guy who can also produce on the offensive side as well. Once fully developed, I believe I'll be one of the very best "well rounded" power forwards in all of the NBA. For a team struggling for an inside presence, what more could you want? I'm your guy, with the 3rd pick in the 2009 NBA Draft, the Oklahoma City Thunder, should select, me, Jordan Hill.

Still not convinced? Check out some of my videos from Youtube Below

***This article not written by Jordan Hill***