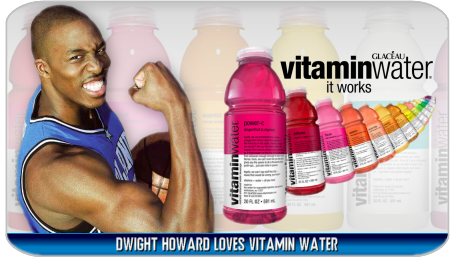 So it's not all that often that we get off topic here at WTLC, but I guess this post isn't entirely off topic since Dwight Howard is playing in the NBA Finals tonight, and the new Vitamin Water advertisement featuring him is set to air during said telecast. I found this over at the SBNation blog for the Orlando Magic, Third Quarter Collapse, earlier today and enjoyed it so much that I just couldn't help but share. The ad features Dwight Howard and well, Dwight Howard in back and forth cut scene's between himself, and well, himself. It's a 30 second tv spot that is sure to have you entertained from start to finish, and if you are as big a fan of Vitamin Water as I am, I'm sure its just another reason why you won't feel bad about dropping a couple bucks on the counter to purchase a Vitamin Water the next time you stop by your local convenience store.
Who says celebrity/athlete endorsement deals don't work? I picked up my first bottle of Vitamin Water shortly after finding out that my favorite baseball player, David Wright, was endorsing the product, and believed in it so much that he took a .5% stake in the company instead of getting paid for his endorsement. Well, that deal obviously paid off when Coca Cola bought Vitamin Water for over $4 billion. I've been a huge fan ever since, and as someone who is trying to lead a much more health conscious life, Vitamin Water is awesome. I'm also a guy who has to watch his calorie intake, so the new Vitamin Water 10 is even more fantastic. I should also note that this isn't a paid advertisement, and I haven't received any free product or anything like that from Vitamin Water either. I just saw the new ad, and thought you guys, as basketball fans, would enjoy it, so I might as well take the opportunity to tell you guys just how much I like it as well. So anyway, take the jump and enjoy the new Dwight Howard Commercial before it hits the airwaves tonight!