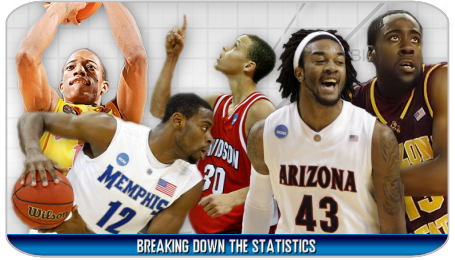 The pre-draft combine numbers are in, and while the scouts and general managers are poring over the data, we'll take a quick look ourselves at some of the "eye catchers". Now it should be noted that the pre-draft combine numbers don't necessarily doom a guy, nor do they project a "can't miss" prospect. However, the numbers do help give an idea for the general athleticism of certain prospects, and obviously that will factor into draft day decisions.

We'll break everything down on a prospect-by-prospect basis, and I'll attempt to explain whether or not the numbers hurt or helped their cause. Why not start with the guys that the Thunder have been looking at...

As Chad Ford said, "(Harden) proved to be a pretty impressive athlete". This was surprising to everyone because the knock on him was that he wasn't a great athlete. All of his athletic testing numbers were better than the average for shooting guards historically at the combine. His standing reach and wingspan were a bit longer than the average SG as well, with his height about average, and his weight just above average.

The two numbers that really caught my eyes were the sprint and the bench press. His sprint time was the 8th best at the combine, and much better than other "supposedly more athletic" shooting guard prospects. I had no idea that Harden was a speedster. His bench press reps are quite impressive as well, as it indicates that he has quite a bit of strength. I imagine that this is part of the reason why he manages to score a lot, because he can muscle into the lane, along with doing a lot of other things well.

It took me awhile to go back through the historical pre-draft combine numbers to find a player relatively comparable, but in 2001, Jason Richardson put up numbers relatively similar. He had above average vertical numbers, a real good sprint score, but only an average agility score. Both did about 15 reps on the bench press, and all of their measurables are relatively similar...For more prospects, read the rest of the article!

We'll make a note of it right off the top that Hasheem Thabeet didn't go through the athletic testing, and Rubio's numbers aren't available because he didn't participate (I believe).

DeRozan had shockingly poor numbers in the agility and sprint tests for a guy who is supposed to be a "raw athlete" who plays above the rim. Harden scored better than DeRozan in the standing vertical, and had a longer wingspan and standing reach, despite being about an inch and a half shorter.

The agility and sprint scores for DeRozan were below the average for shooting guard prospects. Given that DeRozan's status in the top-10 hinges on his athletic ability, one has to suspect that he might fall down a few draft boards, especially since he is coming out as a freshman. Also, one has to be concerned about his defense when his agility score is much worse than Harden, especially with Harden being considered the smarter player.

Evans had a similarly atrocious lane agility score like DeRozan, although it's even worse when you consider that Evans is supposed to be a PG/SG. His sprint score was great, and this suggests he has great straight-line speed, but lacks the fluidity and quickness to move side-to-side. His vertical numbers are about average for a PG and a little below average for a SG. However, Evans has great size and a phenomenal wingspan and standing reach.

I think, like DeRozan, Evans may lack the agility to be a great defender especially in his first few years, as he is also entering the draft as a freshman. These two SG prospects may struggle to make the jump to the NBA initially, if not totally, at least on the defensive end. Still, considering the numbers between Evans and DeRozan, two guys who are considered to be relatively similar prospects, Evans helped himself by possibly jumping DeRozan in the draft order.

Jordan Hill had average numbers for a PF for height, weight, wingspan and standing reach. His vertical numbers are a little above average, and the sprint number is about average. The numbers that caught my eye were the bench press and the lane agility. Average bench press reps for a PF are 13.0, so Hill is a little below average as far as strength goes. Add to that that his lane agility score was way below average (in fact, the worst at the combine), and I could see him getting posted up and beat to the basket a lot. Of course, everyone says that Hill is a hard worker and he'll fight for rebounds despite not being the flashiest guy on the court, but the Thunder already have someone like that - Nick Collison. Bad lane agility scores don't necessarily doom big prospects (see: Brook Lopez). In fact, Al Jefferson of Minnesota posted a lane agility score of 13.08 (not very good) with only 3 bench press reps. So it's hard to fault Hill for the numbers I picked on, but still, there's nothing there to indicate that he deserves to be selected with the 3rd pick.

Curry just put up average numbers for a point guard. Nothing more, nothing less. It's hard to find much of anything to pick on. He wasn't near the top in any of the measurables, but he wasn't in the basement on any of them either. He did put up 10 bench press reps, 2 over the average for a PG, which is not something I was expecting him to do. Also, his wingspan is a bit under the average for a PG, which was also mildly surprising, given that he's a couple inches taller than the typical PG. No wow-factor here that would suggest much of a fluctuation in the draft order.

With that, I'll simply run down a few of my later-in-the-draft "diamonds in the rough"...

Projected to be the 44th pick (mid 2nd round) by DraftExpress, Meeks put up some numbers at the combine that would merit him consideration in the 1st round, especially given his scoring prowess. While he is slightly shorter than the height for a SG, and has a slightly shorter wingspan and standing reach than a SG, his other numbers are extremely impressive. While Meeks didn't jump out of the gym, he still posted one of the best max vertical jump numbers at the combine. He did better on the bench press than the average shooting guard by a few reps. But the most impressive numbers are his sprint and agility. His sprint score was tied for 3rd best at the combine, and his agility score was in the top third or so (slightly better than Ty Lawson, even!). A couple of the things dragging Meeks down were questions about his athleticism and his ability to defend at the next level. He has certainly answered the athleticism skeptics, and I would suspect that his agility will allow him to stay in front of people at the next level, and make up for some mistakes. Say what you will about his lack of ability to win at Kentucky, but I think Meeks has a bright future in the NBA, even if it's as a solid role player who logs 15 minutes a game, or so.

Projected to be the 27th pick (late 1st round) by DraftExpress, Collison put up some numbers that should help his cause. He had the 2nd best agility score, behind only McClinton who edged him by 0.01 seconds. He also tied for the 3rd best sprint score, meaning that Collison had the best combination of agility and speed of anyone at the combine. Despite his small frame (6 foot and barely 160 pounds), he managed 9 bench press reps which is pretty impressive for any PG prospect, much less an undersized one. Collison's numbers and size actually match up pretty well with Speedy Claxton, a guy who was drafted 20th in 2000. Claxton went on to be pretty much a career backup (and still is) but is still somewhat effective when played. DraftExpress says Collison looks like "an awesome backup point guard" - but what more can you expect at the end of the 1st round?

You might be shocked to learn that Damion James, a forward, ran a 3.09 3/4 court sprint, which wound up being the 2nd fastest time at the combine. Talk about a super athletic swingman. He would probably play SF with the potential to slide over to the PF position at times (like he did at Texas) in small lineups. His agility score is rather average, but the rest of his numbers are all very good. He helped himself a lot at the combine. His numbers are actually pretty similar to Ronnie Brewer's, but Brewer had better vertical numbers. I know that the Thunder have Durant, who will eat up a lot of minutes at SF. However, James could develop into a nice swingman or role player, and late in the draft if you can find a talent like James, you take him.

If you subtracted the name and just took a look at the stats, you might expect this guy would be going in the top half of the 1st round. DraftExpress has him projected to go 39th (top 2nd round). In case you're unfamiliar with him, he's a French PG who is more of a raw talent than anything. His stat line isn't terribly impressive, but he has the skills, he just needs to develop them. He's agile and speedy, and his vertical leap was the 2nd highest in the combine (shocking!). I wouldn't mind seeing the Thunder take a flier on him.