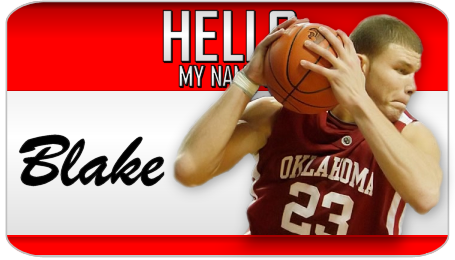 Hello, my name is Blake Griffin. How come a blog about the team in my home state is giving all these other potential picks a chance to speak out and let the world know why they are the right fit for the Thunder, when I haven't been given the opportunity yet? Seriously guys, I'm disappointed, I should have been the first guy you asked to write about why I'm the best fit for the Thunder. I suppose I'll forgive you guys because I realize that the reason probably lies in the chances that the Thunder are actually able to negotiate a deal that would allow them to trade up to the #1 overall pick and take me, are slim to none. But that's neither here nor there, I'm going to take a few minutes anyway and try to convince you why the Thunder should do anything they can to acquire my draft rights.
So I'll start with the most obvious of reasons, I'm widely regarded as the consensus #1 pick and top prospect in this draft. Along with myself, only Ricky Rubio is said to be nearly as hot a commodity as most media outlets are quick to tell you this draft is about the the top two players, then everyone else. Why wouldn't you want to get your hands on the top talent in the draft if a reasonable deal becomes available to you? There is no reason, so I'm here to tell all you Thunder fans, Sam Presti, and anyone else who cares, if  there is even a hint of a chance that you can work a deal for me, that won't destroy the core of great young players you have created, you need to make it happen.

Still not convinced? Check out some of my videos from Youtube below.
***This article not written by Blake Griffin***