Thinking about the Thunder roster, I’m almost convinced that we will pursue a polished big man through trade. The Oklahoma City Thunder has too many trade assets not to use them this summer, especially with many other teams trying to clear cap space. Should Presti use more cap space, or use our existing cap space more wisely by trading unneeded roster fillers? Even though I love Gortat, when it comes to cap space I’m starting to think reduce, reuse, recycle.

Here is a break down of our possible roster by position:

Looking at the glut of guards that we could have next year, I feel that a trade must happen. Russell, Harden, and Thabo are obviously the key guards on this team. Vaden may not make the roster by the end of the summer. Weaver and Livingston are obvious prospects in training with low-cost contracts, so the likelihood of them being dealt is slim. Atkins is likely to be waived but that still leaves us with Watson and Wilkins as benchwarmers. Next year Watson and Wilkins will get paid a combined $9.9M to play off the bench.

Presti could deepen the bench by using trades. Yet when looking at Watson and Wilkins as trade assets, there is a chance of either receive too many players or more overpaid benchwarmers. Personally I would rather have a $10M center than $10M worth of reservists. If the focus is on a center, the team could address a major need without spending more cap space while freeing up more spots on the roster. The Thunder should have around $12M in cap space during this summer, but we also need to clear our roster spots to make room for new talent. This off-season we already have around 18 players vying for spots on the roster. Adding free agents into the mix could only complicate the scenario. 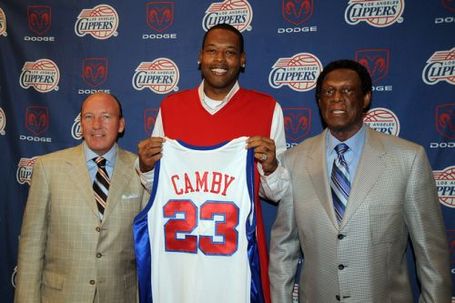 With a trade, we could get the big man we need and still save for the next big hurdle in growing the team. One interesting trade rumor involves Marcus Camby. Since there is a new #23 in the Clippers lineup, Camby is likely to be moved. Lets say the Clippers take Wilkins and Watson, and send OKC Camby and a maybe second round pick. Yes, Camby is old and only has next season left on his contract, but he still has value as a defensive player and mentor. After reading some insightful comments on WTLC, I feel Camby could be more valuable as a trading piece during the next trade deadline. Many teams will be looking for an expiring contract for the 2010 free agency smorgasbord. Playoff contenders maybe willing to trade for a defensive specialist of Camby’s caliber. So if the Thunder could parlay Camby into new talent and few more draft picks, I’d be really excited. Especially if those draft picks are for next years' draft. Just in case you didn't know, the 2010 draft has seven centers projected in the top twenty picks. If Camby isn't traded, his expiring contract would give OKC around $22M to attract Chris Bosh in 2010. Oklahoma has to be more appealing to a Texan than Toronto, right? Sure Camby isn’t our long-term solution, but he could be a step in the right direction if Presti plays his hand correctly.

Just to compare numbers, I've included Camby and Gortat's 40 min pace adjusted stats from the 2008/2009 season. Given Camby's age he still is a productive player. The biggest difference between the two is in Free Throw %, Assits, and Personal Fouls, which Camby leads in all of those categories.