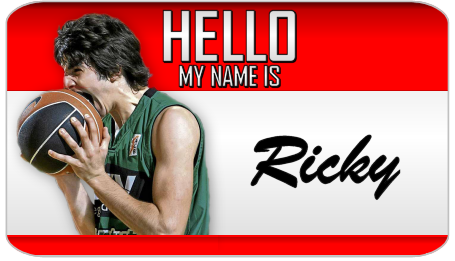 Hello there, my name is Ricky Rubio, and in general, I'm a pretty soft spoken shy person. If you are a fan of the NBA and following all of this crazy draft coverage, you might not expect that, especially with all the rumors that I would only come to the NBA if I'm drafted by a large market team. That is a rumor that kind of screams "look at me" and to be honest, although my style of play is flashy, I'm definitely not a "look at me" type of person. Rumors like this are simply not true, and all these reports have gotten a little out of control. So when I saw Hasheem Thabeet and James Harden writing posts on this blog, well, I couldn't pass up my chance to speak my mind. More than anything, its important for me to win, and when I look at the roster of the Oklahoma City Thunder, its filled with young and talented players just like me, and I can see myself playing with those guys deep into the playoffs season after season.

But more than that, I'm a great fit for this basketball team. The Thunder have a bunch of talented young players who score the ball well, and I'm the guy who can create opportunities and help them get easier baskets. As I browse through this blog, I can see there has been a lot of debate as to whether Russell Westbrook should continue playing the point or move back to his natural position at shooting guard. Even though he's done a great job running the point during his rookie season, I believe he'll thrive at the shooting guard position if I'm running the point. The two of us can provide an explosive powerhouse of a backcourt that other teams in the league will fear above everyone else. My creativity combined with Westbrooks electricity is sure to lead to highlight real material each and every night.

But there is more to me that just flashy passing. You can tell from my statline above that I'm not your typical player who wants to score tons of points. My job is to run the offense, and I believe I do that better than anyone in this draft. I have an unbelievable ability to find passing lanes and get my teammates the ball. Sometimes there are no passing lanes available, and if I don't have a passing lane available to me, I'll find a way to create one and get the ball to my teammates for an easier opportunity to score the basketball. I believe I've been pretty successful at doing this over my four years of playing pro ball, and think I will only improve as my competition level gets tougher.

Speaking of competition level, that is another thing that truly sets me apart from most anyone else in this draft. Not to take anything away from the great college basketball system in America, but playing ball professionally in other countries, like I have, definitely puts me up against greater competition with much more crafty and skilled players on a nightly basis. On the flipside, these guys who are considered high draft choices like myself have mismatches to exploit nearly each and every game they play in college, and aren't often fully tested. So while they are all adjusting the major difference in competition between college ball and the NBA, I'll only be adjusting to the differences of the international game and the NBA, and not nearly as much as the competition difference, although the NBA is the most talented league in the world.

At only 18 years old, I also have the unique situation of bringing many years of professional experience with me that these other guys just don't. So not only am I younger, with more years ahead of me professionally, but I've also already got four years of professional experience behind me. That's not even mentioning that I played in the Olympics last year and fared very well against NBA players during the tournament as I helped lead my team to a medal. My game is developed to a very high level, but at the same time, I'm still young enough to improve my game by leaps and bounds as I learn and grow in the NBA over the next few years. So for a team like the Thunder, I'll be able to learn and grow along with some other really great young players like Durant, Green, and Westbrook. By the time we are all hitting our stride, I believe we could be a championship caliber team as long as the front office continues to add talent where needed along the way.

I do have some work to do on my shooting, but the stats above don't tell the whole story as I missed part of the season due to a wrist injury. Even after I returned from the injury, the wrist hampered my ability to be an accurate shooter. I'm not going to make any excuses for it, but I do realize that I have a major opportunity to grow this area of my game, and I believe I can over the next few years become more accurate on mid-range, and long range shooting. I realize scoring is important, which is why I will work hard to get better at it, but my main job is to run the offense and create opportunities which is what I do best. So if the Thunder draft me, there will be plenty of opportunities for the scorers on this team, and I won't be taking away any possessions from them in that regard, unless I turn the ball over of course, which has been a problem at times as well. Taking better care of the ball is another large aspect of my game that I need to work on.

But overall, I'm the man for the job. I'm young, I'm flashy, I'm an exciting player, and will do an extremely good job getting the ball to the scorers on this team one way or another. Winning is very important to me, and playing with a young, up and coming group like they've put together in Oklahoma City is an exciting situation for me to be involved in, and if I'm  not drafted by the Grizzlies at the #2 overall spot, then I think there is no one better for the Thunder to draft than me, Ricky Rubio. Thank you so much for reading, and I can't wait to see where I end up in the draft later this month!


***This Article was not written by Ricky Rubio***
Like this post? 2009 NBA Draft Coverage: Hello, My Name is series (Click on a player card to view article)