Share All sharing options for: 2009 NBA Draft Coverage: Building A Thunder Draft Board 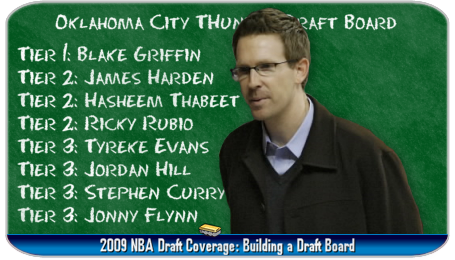 Whenever a draft comes around, fans all become "armchair GMs" and claim to know which prospect is a better fit for certain organizations. Of course, the actual process that organizations go through is a grueling ordeal involving lots of scouting, workouts, interviews, and debating. All of that is geared towards developing the all important draft board - the manual that no team can head into the draft without.

There are many competing draft philosophies, but they all revolve around making a list of eligible players and ranking them in some sort of order. One such philosophy is the oft-maligned "best player available" theory, which suggests that the drafting team should draft the highest ranked player remaining on their board. The theory goes that the team will be able to stockpile the best talent that they can, and if they wind up with too many players at a certain position, they have the ability to trade. A team that has employed this method is the Atlanta Hawks, according to Chad Ford, who had Marvin Williams rated as #1 on their board in 2005, allowing them to take Williams over the likes of Chris Paul and Deron Williams, despite having a need for a point guard.

According to Ford, many other teams employ a tiered philosophy. In this system, the team still ranks prospects in order. However, it is based on the ability to separate the prospects into groups where there are clear drop-offs in either talent or risk/reward balance. Often there are only 1 to 3 players in the "sure fire" top tier, and then there is a clear division that emerges. More on building a draft board after the jump!

As Ford points out in his article, it's very hard for teams to come to a consensus on their rankings, much less tiers:

"I fight with my scouts constantly," one prominent GM told me. "Everyone has their own ideas, their own preferences, their own methodology. There really is no consensus and, I hate to say it, I'm not sure there's even any real right or wrong."

However, the "tier method" could potentially have some value, especially if there is considerable disagreement amongst people in the organization on a few prospects. While there may be heated debate on which prospect is better, the people will often come to an agreement that both of the prospects have similar potential to make an impact on a team. To solve the argument, the tier system also employs team need.

For instance, let's just throw out three current NBA players that have a big impact on their teams: Dwight Howard, Kobe Bryant, and LeBron James. Howard is a PF, Bryant is a SG and LeBron is a SF. Let's say, for the sake of argument, that they were all up for draft, and they were all ranked in the Thunder's "Tier 1". I think you could probably rank the Thunder's positional needs as follows: SG, C, PF, PG, SF. Based on this, the Thunder would rank the prospects in Tier 1 as follows: Bryant, Howard and then LeBron. Chad Ford says that many teams who employ the tier system have enjoyed a fair amount of success, and it really makes sense, because they are addressing needs while drafting just about the best talent available.

Furthermore, the team will always take a player from a higher tier if they are still available, even if there is a player at a position of need available in a lower tier. For instance, using the above example, let's say the Thunder were drafting 5th and that LeBron was still available. Since they had LeBron in their Tier 1 (elite talent) they would take him even though they might have a player that addresses a need in their Tier 2.

I think that it makes a whole lot of sense. So, with that, I'm going to go ahead and throw together my own draft board for the Thunder based on this concept. I'm assuming the Thunder would make shooting guard the priority position, followed by center, power forward, point guard, and small forward.

Simply put, Blake Griffin is in a class by himself. I'm sure any team would love to get their hands on him. I don't see any other prospect that everyone is sure about, and that teams think could make as much of an impact. According to Blake's agent, every single team told him that he'd be the #1 pick if they were drafting in that position. That's why Blake is in Tier One by himself.

These three players seem to be the "best of the rest". Most teams would take any of these three guys in a heartbeat. After them, the talent pool remains relatively strong, but the prospects are less "sure-fire". Most scouts and teams that I've heard quoted, as well as draft experts, agree that Harden, Thabeet, and Rubio will all have big impacts in the NBA. James Harden gets the edge in this tier for the Thunder because he fits the position of most need. Hasheem Thabeet comes in a close second, while Ricky Rubio slides down to 4, despite many people thinking he has superstar potential. I'm sure the Kings are really hoping that this is how the Thunder's draft board looks, because that means that Rubio would likely fall to them (with Griffin to the Clippers and Thabeet to the Grizzlies).

These five guys have an extraordinary amount of talent, but they have some question marks, moreso than the top four players on my board. Tyreke Evans and Jordan Hill will be fighting bad combine marks in certain drills. Stephen Curry is widely viewed as a role player who will be a spot-up sharp shooter in the NBA, but will be limited by his sleight frame. Jrue Holiday has the opposite problem, the lack of a developed jumpshot and some limitations on his ball handling skills. Jonny Flynn, meanwhile, is mainly knocked for being small and undersized, and needing to add strength. At times he can try to do too much. However, despite all of these skepticisms and criticisms, all of these guys have the potential to have a big impact on a team for a long time, which is why they all fit in the top 10.

These guys have quite a few more question marks, but they also have the ability to become stars. It's really a needle in a haystack here. One or two of these guys will be great NBA players. Which ones is difficult to tell. I know I might draw some criticisms in this section of my board. Henderson at 10? Well Henderson did okay in his workouts, and he's a very polished player (similar to Harden, just with less consistency and creativity). He is an excellent perimeter defender and has a high basketball IQ. He doesn't drill the trey, but still gets it at about a 34% clip, which is certainly better than DeMar DeRozan's three point rate of 17%. Also, DeRozan is green, hasn't had much experience, and is a raw talent. He graded out poorly in a number of drills at the combine. I would have actually put him lower, but to adhere to the tier system, he was at a position of need. People may also be wondering why I have Jennings so low, the lowest PG in this tier. He showed some immaturity in skipping college to go play ball in Europe and is now trash talking Ricky Rubio. It's almost like he's asking to be a huge bust. Not to mention the fact that he makes poor decisions at times and is an average shooter at best. Teague is a combo guard with a lean to the point which is why he got the edge out of the point guards. I actually think Eric Maynor could be a steal in the middle rounds. Everyone thinks he got away with playing in a bad conference, but he's a solid player and put up big numbers even against the "big boys" in the NCAA tournament.

I think all of these guys could be role players or deep bench players in the NBA and any of them could probably make an impact on the Thunder in the next few years. I can almost guarantee you there will be one star or solid starter out of this group (there usually is out of the last 10-15 first round players every year). Chase Budinger had a ridiculously great vertical leap at the combine and he's a pretty good scorer. I think he'll shoot up some draft boards and it's not all that surprising to see him at 20. Terrence Williams has the talent and the range to succeed in the NBA, along with the athleticism, just something doesn't quite seem to add up with him. Toney Douglas is a 6'2" shooting guard who thrives on slashing to the rim and getting fouled, but he's a scoring machine and he is an excellent on-ball defender. He's undersized for an NBA shooting guard, which is why he might not even go until the early second round, but I like him a lot. Ellington sneaks into this tier as a pure shooter and smooth athlete, but not a great defender. Some of you may be saying, "Blair at 24??? Is he crazy??". This might have been the case before Blair's knees got red flagged. According to Chad Ford, NBA scouts and GMs have called the medical results anything from alarming to devastating.

Honestly, I wouldn't mind a pair of teammates (Harden and Pendergraph), but we shall see how it all shakes out. I know we've re-hashed a million times what to do with the third pick, but with this tier system bringing out a few of the later round prospects, who do you think the Thunder should take with the 25th pick? I've created a poll below with all of the players I have listed in my Tier Five.

Additionally, it's possible the Thunder don't employ a tiered strategy at all. There's really no way of telling. Sam Presti keeps his cards pretty close to the vest. But, I hope I've introduced the concept of a tiered draft strategy and why it would be beneficial. If I were a GM, this is the strategy that I would use personally, as it seems to make more sense than simply drafting the best player available.