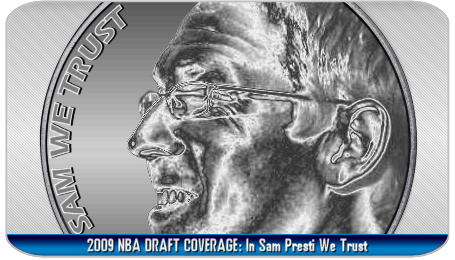 As we inch closer and closer to the 2009 NBA Draft, I thought it would be fitting to make very clear of one thing, In Sam Presti We Trust. The moves he's made since joining the organization have been cold and calculated as he attempts to completely rebuild this team, for the long haul, and from the ground up. He hasn't been afraid to trade superstars (Ray Allen), walk away from pricey re-signings (Rashard Lewis), or even walk away from completed trades involving stud players because his future became a little cloudy after Thunder trainers evaluated him (Tyson Chandler). He did all that and more, much more, in just 2 years since being hired by the Sonics. Its a pretty long list that you'll see after you make the jump.

Sam Presti became the General Manager of the Seattle Sonics on June 7, 2007 and since then, not only has he made those tough decisions/big deals listed above, but he's also turned over nearly the entire roster. Just take a look at these names: Ray Allen, Andre Brown, Desmon Farmer, Danny Fortson, Mickael Gelabale, Andreas Glyniadakis, Rashard Lewis, Randy Livingston, Johan Petro, Luke Ridnour, Mo Sene, Chris Wilcox, and Mike Wilks. In addition to those guys, Earl Watson, Nick Collison, and Damien Wilkins were also on the roster when Sam Presti took over the club, however, before the end of the summer, or before the trade deadline next year, its not out of the realm of possibilities for one, two, or even all three of those guys to be moved. Of the three remaining Pre-Presti players, only Nick Collison figures to be around past next year, at least in our estimation.

We've all been exhausting ourselves discussing what the Thunder will do with their #3 pick in next weeks draft, and while all the possibilities are intriguing, one thing we can bank on is that Thunder General Manager Sam Presti will undoubtedly make the smartest move for Oklahoma City with respect towards building this team for the future. He and his staff are looking at all sorts of players, and discussing potential moves with all sorts of teams. By the time the Thunder officially make/trade their pick come draft day, you can trust that the staff will have done their homework, carefully plotted out their move, and figured out the best way to make the most of our draft choice. It could come by using the 3rd pick to select a guy like James Harden (Which we love), Hasheem Thabeet, or even a guy like Tyreke Evens (whom you'll likely be hearing from, fictitiously of course, this week in our continued "My Name Is Series"). Or perhaps it could come by trading that third pick away, possibly with expiring contracts (Earl Watson anyone....please?), or with draft picks, and could be used to add a veteran player from another team in addition to dropping down a few slots and drafting a player like Stephen Curry to help maximize the value of our 3rd overall pick.

Whatever the case, In Sam Presti We Trust, and In Sam Presti You Can Trust. If you don't believe us, just take a look at the entire history of moves he's made since joining the club. Its quite a long list, especially when you consider he only took the job just a little over two years ago, but one thing is for sure, he isn't afraid of wheeling and dealing. So take a few minutes, look over this list, form your opinion about any/all of the moves he's made, and let us know if you Trust in Presti as much as we do.

Also, it's recently been announced that the state of Oklahoma will be releasing a limited edition State specific Nickel for use in the state of Oklahoma only, as part of an advertising campaign to raise awareness about our professional basketball team. The tails side is of course the Thunder logo, but the heads side features our very own Sam Presti, with the words In Sam We Trust. You can see the head side of the Nickel below Presti's transaction history on this post. Of course this is all complete malarkey and isn't actually true, I just had to make something up so that my post header made more sense, or cents. I mean not everybody would have made the connection between In Sam We Trust and In God We Trust which is most commonly found on all forms of American Money. And no, in no way does this post, or post title have anything to do with God or Religion, its just my new catch phrase for anytime someone posts or makes comments in reference to our wunderkind general manager.

(Transaction History From HoopsHype, although any links contained inside stay in the SBNation Network) 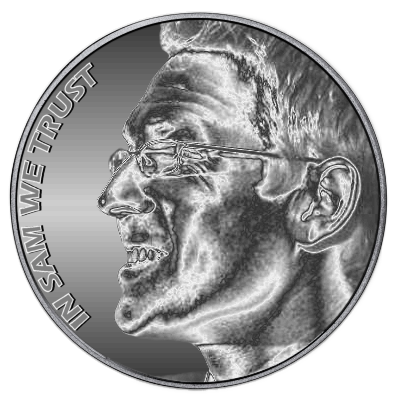