4D here. Just got back from the Thunder Relocation & Upgrade Event. It was a well-ran event, and I was greeted warmly even though the event was geared toward season ticket buyers (I am just a lowly 10 game pack buyer). The Ford Center will have great suites added at each side of the arena. The suites will cost somewhere between $175 and $195 and can accommodate 4 to 6 people. They mentioned the new scoreboard, which I can’t wait to see in action. The best part (other than me knocking down a couple of three pointers) was when Rumble taught my son how to drive a segue.

Peace, Love and Thunderstanding: Changing Gears | The Lost Ogle
I have made it no secret that the Thunder drafting him would not be welcomed by me. While a lot of fans and analysts think Thabeet would be a good fit in Oklahoma City, I don’t see it. Those people like him because he’s tall and can block shots, but none of those people mention that the guy doesn’t seem to like basketball (he started playing only when a basketball coach in Tanzania convinced him he could get a free education in the U.S. They also don’t mention that he skipped out on the "athletic testing" at the NBA Combine which is a red flag making me wonder if the reputation he’s gotten as "extremely athletic for his size" is a media creation based on a misunderstanding of how much athleticism it takes for a reed thin 7′3″ player to get his hand above the rim.

Ricky Rubio may not be good match for Grizzlies in NBA draft - Scott Howard-Cooper - SI.com
A rival general manager is on the phone discussing the Grizzlies' options with the No. 2 pick. Ricky Rubio is the second-best prospect in the draft, he says, echoing the feeling of most peers, and Rubio would make Memphis better. But ... "If I'm the Grizz, I probably trade the pick." Run from it. Full sprint. Get the certainty of an established player, maybe a power forward to address their biggest position need, and probably pick up a choice later in the first round while dodging the gathering storm of problems. Not the usual every-draft-is-a-risk problem, either.

Hasheem Thabeet: Another big-man bust from UConn? | NewsOK.com
"He really has made remarkable improvement, and for a period of time he dominated college basketball," Gottlieb said of Thabeet, who averaged 4.2 blocked shots before declaring after his junior season. "They're making everybody drive to him, and nobody wants to drive at him because he blocks everything."

The Official Daily Thunder Big Board (v. 2.0) | Daily Thunder.com - Where Thunder Happens
Royce: I’m actually extremely close to bumping Harden to the two slot. I just think he fits with this team like Ace Ventura in parking spots. His game compliments every other Thunder starter and he would form a nice two-guard combo with Thabo Sefolosha. Really the only reason Rubio remains above Harden is the hype. I just can’t ignore it, even though I’m desperately trying.

The Official Daily Thunder Big Board (Part II) | Daily Thunder.com - Where Thunder Happens
Tyler Hansbrough - 6′8″/ F/ North Carolina (27) - highlights He’s going to play for 10 years for someone and is going to contribute the whole time. If Eduardo Najera can make it for 10 years in this league, so can a three-time All-American. He’s just the type of player that gets it done. It’s not pretty every time (or ever) but somehow, he puts the ball in the basket. Granted, he was completely ineffective against a guy like Blake Griffin, but he’s a guy that is going to try and outwork everybody. If he’s not on your team, you hate his guts. But if he’s on it, you love him to death. But then again, he just said this today in an interview: "These are probably a bunch of guys who just sit in their basements and probably just write out mock drafts and do this or do that. They haven’t followed me for four years and they haven’t seen exactly what I’ve done or they wouldn’t be saying that stuff." /called out

THUNDER: From Costa Rica to Georgetown, Green Keeping Busy
He snorkeled the blissful coastline of Costa Rica and rode a zip line through its rainforest. And hardly a soul knew it was Jeff Green. That’s just how Green likes it, especially since this was his first vacation in what seemed like forever. The Thunder forward has since resumed classes at Georgetown University. He hits the books just like any other college kid, and even has a six-page English paper due next week.

Immediate Needs: Oklahoma City Thunder
The Oklahoma City Thunder is in a fantastic off-season situation with having the No. 3 and No. 25 picks in the draft and considerable cap space available (roughly $17 million at present). Winning the No. 1 pick would have been a Thunder dream-come-true, but most Oklahomans have accepted that Blake Griffin is history. Not happening. The team is being built around future All-Star Kevin Durant; and the 20-year old kid is undoubtedly on his way to becoming a superstar in the league.

NBA draft: Celtics angling for Tyreke Evans? That's among the many draft rumors flying - ESPN Insider
Of all the teams that have been active in trade discussions the past few weeks, the appearance of the Celtics has been the most surprising and the most interesting. While the Celtics have shot down a rumor that they were talking to the Suns about an Amare Stoudemire for Rajon Rondo swap … we keep hearing their name more and more in conjunction with a top-to-mid first-round draft pick -- a sign that Danny Ainge must see someone he likes up high. While various sources have different players pegged, there seems to be some consensus that one player in particular -- Memphis' Tyreke Evans -- is an Ainge favorite.

NBA Draft - Wake Forest, Duke among top pro-producers; Memphis, Louisville struggle - ESPN Insider
So much has been made of the impact of one-and-done players on the NCAA that one could forget the influence a year (or four) in college can have on NBA applicants. No, we're not suggesting that the best and brightest players need an earful from some long-tenured tyrant. In the case of some of the most productive college programs (think Kenny Anderson, Stephon Marbury and Chris Bosh at Georgia Tech), all it takes is some minor refinement to a future All-Star. But the data does show that over the past 20 years, colleges have varying rates of success in producing pros who, well, produce.

NBA Draft - Wake Forest's NBA lineage bodes well for James Johnson and Jeff Teague - ESPN Insider
Gani Lawal (Georgia Tech) Though he's leaving early, like Kenny Anderson, Chris Bosh and Stephon Marbury before him, Lawal doesn't have the universal buzz they had, nor the total support of coach Paul Hewitt. That's because Lawal panics in the low post, especially when he can't see where the double-team is coming from. That being said, Lawal is a power forward who plays longer than 6-foot-8. He could complement an established post player nicely.

That Rumble is such a sweetie! 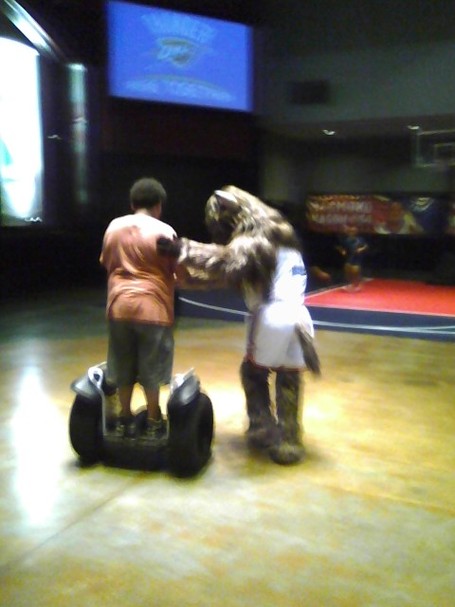 Miss a previous Loud Links Post? Find it quickly Below!