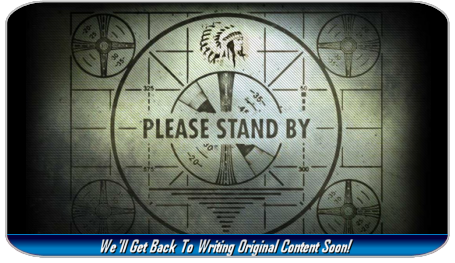 I guess its a little obvious that new content from WTLC has slowed down a little bit lately, and just like all of you, the life of a blogger tends to get busy when real world issues start to pop up. For the past week I've been running a bit short on time due to some unexpected extra hours at my real job. Real job? I thought blogging at WTLC was your real job! Well, sadly enough, bloggers gotta make money too, so yes, I do, indeed, have a real job, with real demands. It's not easy to write the long diatribes you are used to reading when I'm plunking down 70+ hours at the real job and still trying to maintain some downtime in between work, and my excercise schedule (yes, Mister P is hard at work taking care of a lifelong weight problem). So unfortunately I haven't been able to keep the site as updated as I it has been in the past, so I hope you'll bear with us as we try to keep this sucker cranking out new content as often as we can.

In the meantime, we encourage you guys (that have an active interest in becoming bloggers yourselves) to write some awesome fanposts, as we'll be on the lookout for outstanding articles that deserve the frontpage treatment. You never know, if you write enough QUALITY stuff, you may find a gig writing on the site fulltime. Even with the additions of dishingoutdimes and daddydai, the site could use another fulltime blogger to help keep the content coming. Obviously we are looking for someone who has tremendous passion for this team, strong writing ability,  knowlegable about basketball, and someone who can put out articles of the caliber to the ones we post on the frontpage. Now, I'm not guaranteeing that we'll add anyone to the staff anytime soon, I'm just saying, if you write enough quality stuff, it could happen. Also as we get closer to the start of the season, we'll be looking for similar people who are interested in writing game previews and game recaps. If you read this site during the season, you already know how daunting that was for this lone blogger cranking out game previews, live game threads, and game recaps all in the same day, along with other articles. Its not only time consuming, but overwhelming at times.
But not to veer too far off topic here. In addition to the extra hours, I also have a vacation coming up beginning next Friday and running through the following Sunday. If you are paying attention, that includes the entire week of the NBA draft. What the hell kind of legitimate blogger schedules a vacation during the week of the NBA Draft anyway? Well, this idiot blogger did just that. By the time I realized the week it was scheduled, I'd already bought the non-refundable plane tickets, so needless to say, I'm taking my vacation as scheduled. I don't as of yet know whether or not I'll have access/time to make any posts during that week, but dishingoutdimes has agreed to take over the blog keys for that week and drive the blog car so you guys can stay updated on the happenings before/during/after the 2009 NBA Draft. I want to thank DoD in advance for picking up the slack while I'm off on vacation, and thank all of you guys for reading, commenting, bearing with us, and being part of our site.
When it rains it pours, and I'll also be having some company over this coming weekend, and who knows how much time I'll have to write/prep articles for the coming week. One thing I can promise is we'll at least have something new up on Monday, and I'll do my best to not only get a new post up each day next week before I fly away on Friday morning, but hopefully have a few extra posts scheduled to post while I'm away. Of course once I'm off, DoD will be shelling out new content, and daddydai will continue to tirelessly crank out links on a daily basis as he's done since taking over Loud Links. I can't say enough how great of a job these two cats have done in their short time with the blog. Thanks so much for your patience and we'll see you back here soon with some more brand new original content.