Breaking Down The Statistics: James Harden

Share All sharing options for: Breaking Down The Statistics: James Harden 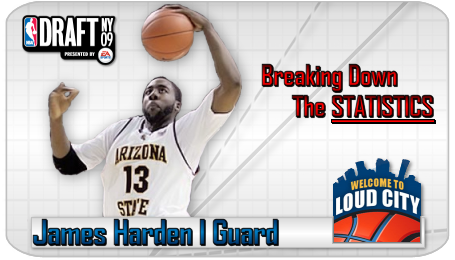 In my FanPost titled "Memo To Presti: Get Some Shooters", I detailed some of the shooting woes of the team, and some options through the draft or free agency to address the problem. Obviously one of the solutions is James Harden, widely regarded as the top shooting guard prospect in the 2009 NBA Draft, as well as a top five pick. First, I'll re-hash some of the statistics on the Thunder's poor shooting (why the Thunder need a shooter), and then I'll delve into some reasons why Harden could be the answer (why Harden is a good shooter).

Let me start you off with a quote from my FanPost that is a good introduction for the topic at hand:

The Oklahoma City Thunder, as you may not be surprised to learn, were not a good shooting team in the 2008-2009 season. As a matter of fact, as a team they shot 44.7%, which was good for only 26th in a league of 30 teams. You also may not be surprised to learn that 12 of the top 15 shooting teams in the league made the NBA playoffs. No team that shot worse than 45% from the field made the playoffs.

They say that defense wins championships, but you're also not going to advance to the playoffs if you can't put the ball through the hoop. 75% of the playoff teams this year ranked in the top half of the league in shooting percentage.

But why are the Thunder among the league's worst in shooting percentage? The answer and some info on Harden, after the jump...

82games.com is a great site for some insightful articles on basketball, and nice sortable statistics. For those of you who haven't been there, you should check it out! Anyways, I was looking over some stats on there when I discovered that in the 2008-2009 season, 49% of the Thunder's shots were 2-point jump shots. The 49% clip made the Thunder the 3rd most frequent 2-point jump shot team in the NBA. This statistic is more amazing when you consider that the Thunder only shot 36.6% on 2-point jump shots, good for last in the NBA.

It shouldn't be a surprise, therefore, that the Thunder were such a poor shooting team. When you do something very poorly, and attempt it very often, your success rate won't be terribly high.

Beyond Kevin Durant, the Thunder don't really have anyone who is a good shooter/scorer, and the obvious hole is at the shooting guard spot. A team needs a guy who can start at SG and not only be able to shoot at a high percentage, but be able to score in a variety of ways, and score in bunches. Let's take a look at what the Thunder have right now:

Okay, I hope I've convinced you that shooting guard is possibly the biggest hole on the Thunder's team. Time to shift the focus to Harden, and how he might be able to help out in this regard.

Harden has been called "the most polished player in the draft" and "the most NBA ready", which bodes well for a team that could really use some help at his position immediately. But, as I'm sure you're all saying, cut to the chase - how can he shoot? Take it away DraftExpress:

Very efficient, while maintaining fairly high usage rates, Harden made 47% of his shots in logged possessions –an excellent percentage for a two. None of the 5 players who used as many possessions as Harden (Marcus Thornton, Jermaine Taylor, Jodie Meeks, Jerel McNeal, Dar Tucker) were as efficient as he was from the field.

The important thing here is not only that Harden has a good shot and jumpshot, but that he has a high USG% - he is assertive on offense. This is something that the Thunder really lack at the SG position. Harden can also shoot it from outside, as he nailed 35% of his 3 point attempts. His college PER was 29.2, good for 22nd in the nation. He scored over 20 points in 18 of his games this past season, or over half of them.

Surprisingly, Harden gets to the rim a lot and could provide a good slashing tandem with Russell Westbrook. DraftExpress again:

A lot of Harden’s efficiency comes from an area that most probably wouldn’t expect it to. In spite of his perceived athletic limitations, Harden was a terrific finisher around the basket this season. Not only did he get to the rim more than any other player on our list (8.7 Pos/G), he ranked in first comfortably at 1.25 PPP.

One more clip from DraftExpress before I wrap it up:

Harden's biggest shortcoming ended up being in the perimeter shooting department. He was terrific on the very few catch and shoot opportunities he received with his feet set (2.4 Pos/G), but really struggled when being contested (.85 PPP) or shooting off the dribble (.73 PPP).

Despite getting knocked for not being an athletic freak, Harden succeeds at getting to the rim and he knows how to finish. He probably won't be able to "blow by" guys all the time, but he's a very smart and intelligent player who will take opportunities when they present themselves, obviously, if he gets to the basket about 9 times per game. Another thing that's encouraging is that he does well when doing the catch and shoot routine, and he should be able to do that with the Thunder given that Durant will be the one drawing the double teams and traps.

It is discouraging that he struggles shooting off the dribble (27%) in those situations (dribble drive and then pop up for a jumpshot quickly), but that's something that is correctable, and something I'm not sure the Thunder need him to do immediately. It would make him a far more dangerous player if he could develop that shot, because teams would have to respect his driving ability, but still play him tight enough to prevent the jumper.

The other good news is that Harden uses isolation to create offense more than anything else in his game other than driving to the rim (5.2 Pos/G). He should get plenty of isolations if he was on the Thunder, as Green, Durant and Westbrook are all viable scoring options - proven at the NBA level.

Harden's stat line this past season at Arizona State was 20.1 ppg, 5.6 rpg, 4.2 apg, 1.7 spg. He averaged about 35 mpg, which means he is used to playing extended minutes and could contribute a lot his first season (despite the college season being slightly less than half as long as the NBA season). You may think that for a guy who does an awful lot of scoring, Harden's secondary stats are kind of high (rebounding, assists, steals). He's aggressive in the lane and a team player so he grabs a lot of boards, especially on the weak side. Like I said, he's a smart player, so when he was heavily defended, he wasn't afraid to pass it off, and on top of that he's an adept passer. It's tough to gauge his defensive prowess given that Arizona State played a zone, but he jumped passing lanes quite a bit.

Anyways, I hope I've proved to you that the Thunder need the most help at the shooting guard position through various statistics. A lot of that may be due to the youth and lack of NBA experience at the position (Weaver and Sefalosha). Harden sits like a gem at the top of the draft board, there for the Thunder's taking. The biggest question is whether or not the Thunder want to address the shooting guard position by getting younger.