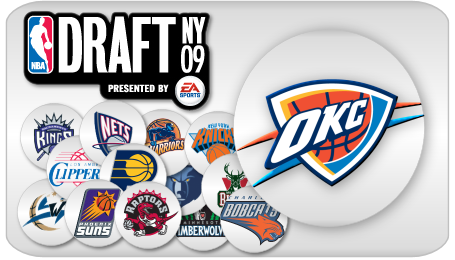 So you may have read about the Oklahoma City Thunder working out 12 players who will be part of the 2009 NBA Draft, in Darnell Mayberry's Thunder Rumblings Blog. The list of players, as you will see below, isn't exactly the caliber of player we would see the Thunder taking at #25 overall in the first round. Being as we only have two picks during the draft this season, both of which are first rounders, one might beg the question, why are the Thunder looking at these players? If you are, you are not the only one, some of the regulars who frequent the OKC Thunder Fans Forum, are wondering the same thing. One of our semi-regular commenters here at WTLC, A.D., brought up the point that they are working these guys out as likely free agent signings after the draft. While that is one good theory, WTLC has another theory that wasn't brought up during the thread linked above.

In THIS POST, which was made earlier in the week, we made the argument that at least 5 players, possibly 6, would probably not be returning next season, along with 2 more possibly headed for a season in Tulsa to gain experience and develop their game by getting substantially more playing time than they would be if they were sitting on the Thunder bench. So when considering that, and the fact the two of those guys are still sitting on contracts (Atkins and Watson), you can begin to put the pieces together as to why the Thunder might be working out some of these players, and although some may be looked at for post draft free agent signings, perhaps others are being looked at for 2nd Round Draft Choices. Did that get your attention? Thought so, now make the jump...

Before we get any further, I'm sure you are wondering who the 12 players are, right?

...from Thunder Rumblings. (Link at the top of this post)

Oklahoma State’s Terrell Harris, Texas’ A.J. Abrams, Marquette’s Jerel McNeal and USC’s Daniel Hackett headline this first group, which is filled with guards and has only one player listed taller than 6-foot-6.

So now you see why everyone is sort of wondering why the Thunder worked out these twelve players huh? We'll, lets jump in. Like we mentioned before, the Thunder have two guys in Earl Watson and Chucky Atkins that are likely to be traded and that could happen during the draft itself. The Thunder have value in the sense that both of these guys are expiring contracts and either one could likely be traded to a team looking to focus on creating room for the free agent bonanza in 2010, and its not entirely out of the question that either one could be traded straight up for a 2nd round pick (More than likely a late 2nd round choice).

Another trade scenario is that the Thunder aren't in Love with anyone at the #25 choice and doesn't want to get involved with guarantees that go along with first round selections. On draft day you might see the Thunder trade this pick for a pair of 2nd round choices or even package Atkins or Watson together with this pick, for a veteran player with multiple years left on his contract, and a 2nd round pick. Perhaps the Thunder really like what they see out of several of these workouts, we might even see both of those scenarios play out. Can you imagine the Thunder trading the 25th overall pick, Chucky Atkins, and Earl Watson all on draft day during multiple trades to pick up 3 or so 2nd round picks? To be honest, that's a bit of a stretch, but what I'm trying to emphasize here is, that the Thunder may very well be looking these guys to draft, in the 2nd round, as opposed to post-draft signing or using up that #25 overall pick.

A very big reason why I think you will probably see a trade during the draft and the Thunder acquiring a second round pick is because a good number of these guys are projected to go in the 2nd round. Seriously, why would the Thunder be working out players who are almost definitely going to go in the 2nd round, like Jermaine Taylor who is projected to go as high as #41 over at NBADraft.net in their Full 2 round mock draft. There you can take a quick peak and see where they think some of these guys are likely to go. We all know Sam Presti isn't hesitant to pull the trigger on any deal he feels will help the Thunder, and I just can't wait to finally see what he ends up doing. What do you guys think? Are the Thunder looking to ditch their #25 pick and drop to round 2? Or are they looking to sign these guys to free agent contracts or as possible project players at their D-League affiliate, the Tulsa 66ers?