Getting To Know Nate Tibbetts / Discussing Impact On The Thunder

Share All sharing options for: Getting To Know Nate Tibbetts / Discussing Impact On The Thunder 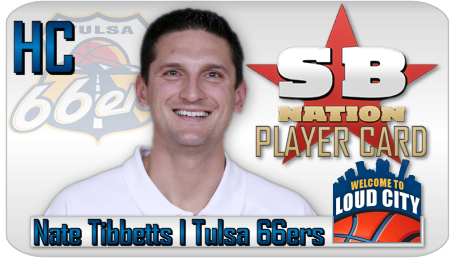 First of all, we gotta give a shout out to our good friend Ridiculous Scott over at Ridiculous Upside for cluing us in to this news earlier today (Did you like that Scott? FYI...I'm never going to refer to you on this site again without attaching the "Ridiculous" moniker before Scott) that Nate Tibbetts has been named the Head Coach of the Thunder owned D-League affiliate, Tulsa 66ers. So Nate Tibbetts, yeah, he's the new head coach of the Tulsa 66ers, and unless you are a hardcore D-League fan, you probably have no idea who this is. As a fairly new fan of the D-League, I'm not tremendously knowledgeable about him either, but I did a little digging so I could give you a bit more information on the guy, and try to figure out the reasons behind his hiring.

For the past two seasons, Nate has been the head coach of the Sioux Falls Skyforce, and the previous two years he was their assistant head coach. During his tenure in Sioux Falls, the Skyforce finished with a 53-47 record to go along with 1 playoff appearance. Before that he spent four seasons as an assistant coach at the University of Sioux Falls and helped to lead the Cougers to a 92-44 overall record along with two trips to the NAIA Division II Championships, and 1 final four appearance in said tournament. He also graduated from the University of South Dakota, so one thing you can gleam from this initial paragraph is that the guy has been ingrained in the Dakota area for quite some time, and it was not likely an easy task to convince him to make a change. Perhaps the Thunder have some long term plans they decided to share with Nate in an effort to entice him to make a change and leave the area he's been in for many years.

During the announcement Press Conference, Sam Presti was quoted as saying "We are pleased to add Nate to the Thunder organization, and We feel that in adding Nate, we are bringing someone on board that possesses a commitment to the development of our players in both Tulsa and Oklahoma City." That is a rather short statement that speaks volumes about what the Thunder are hoping to get out of Nate Tibbetts during his time in Tulsa.
Clearly his time spent as an assistant in College and his four seasons in the  D-League will be invaluable as he attempts to help young talent learn, grow, and improve their game. The Thunder have hired a guy who has a ton of experience working with young players. By the statement above, it looks to me like the Thunder may be giving him some terrific young talent to work with in his first season. Now, that statement could mean any number of things, but to me, it says that they brought in Tibbetts specifically to help develop some of the Thunders younger project players, two of which are currently on the roster in D.J. White and Kyle Weaver, with likely one or two more to come after this summers draft. Of course that statement could just be your run of the mill politically correct statement with no real undertone as well, so take it for what its worth.
Because of his history working with young players in college and in the D-League, he should be able to accomplish something that Paul Woolpert wasn't able to pull together from his players during most of the season, TEAMWORK. Clearly the Thunder are putting a major focus on teamwork and defensive minded play at the NBA level, and by bringing in a guy that has 8 years experience working with and helping develop young players, they get a guy who should be able to mold these young players into the same defense first, team oriented players that the Thunder are so tirelessly searching for while building this team from the ground up.
As Sam Presti continues to build toward the future, this move will better allow him to develop a larger crop of young players to help sustain the Thunder for the long-term future. Despite limitations in the D-League assignment/callup rules, Presti didn't shy away from using the 66ers like an MLB farm team last season, sending players like D.J. White and Kyle Weaver back and forth multiple times over the final few weeks of the season, as well as using the 66ers to evaluate an eventual signee of the Thunder, Shaun Livingston. So bringing in a good number of free agents, and draft picks, I wouldn't put it past Presti to attempt to stock both ponds full of potential big fish.

If you read our "Who Stays, Who Goes" post earlier this week, you are probably also aware that we're likely to have movement from 7 or 8 of our 15 roster players during this off season. Through free agent signings, draft picks, and trades, Sam Presti could potentially have a very competitive team in Oklahoma City next season, as well as a wealth of young developing talent in Tulsa. With the kind of rosters moves I'm expecting Presti to make this offseason, I wouldn't be surprised if the Thunder attempted to put all its second round draft picks in Tulsa to work alongside D.J. White and Kyle Weaver. This instantly would make the 66ers a contender in the D-League and give these young talented players a chance to get tons of minutes and develop at a faster rate than they otherwise would, sitting on the bench for the Thunder. This hiring looks to be just another cog in the champioinship machine that Presti is crafting together.