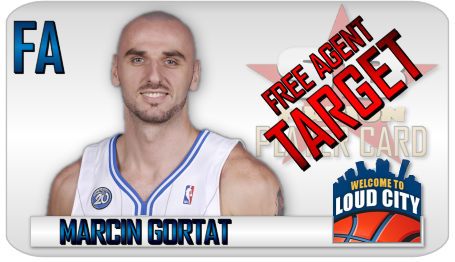 Since we still have a few weeks before the lottery, I thought we could take some time and look at some free agents that might potentially have a new home in Oklahoma City next season. Today, we're going to look at a guy who could add some much needed depth at Center, and we all know that we need help on the inside, especially at the Center position. Shortly before the Trade deadline, everyone out there in Thunderland seemed to be pretty ecstatic about the Thunder pulling off the trade for Tyson Chandler. That was until the trade was rescinded and the Thunder once again were left without a long term solution at Center. Enter Marcin Gortat? Possibly, although he's probably not going to be that dominant center we're looking for to win a Championship. One thing is for sure, the Thunder should at least give him a look when the free agent market opens up this summer.

So by now, you may be asking, who the hell is Marcin Gortat?  He's the Polish Hammer of course! Geez, where have you been? Seriously though, Marcin is a backup center for the Orlando Magic, and when Dwight Howard isn't wreaking havoc on opposing teams, Marcin Gortat is one of the guys who is stepping in to give him a break. At 25 years of age, he's in the midst of finishing up just his second season in the NBA. He progressed enough during the off season that his game appearances went up from just 6 games last season, all the way up to 63 games this season. During those games, he's averaged about 12 minutes, 4 points, 4 boards, and a block per game, not bad for about a quarters worth of playing time. You can see how we think he could fit in with the Thunder, after you make the leap...

So if he isn't likely to be that dominant center we are looking for, why are we looking at him as a possible free agent acquisition? Well, right now, we're not likely to be getting our hands on any dominant Centers anytime soon, and the deal Oklahoma City gave Nenad Krstic last season shows that the Thunder are committed to giving him the opportunity to become the player he was before his injury. Currently the Thunder are rotating Nick Collison onto the floor when its time to give Nenad a breather. As much as I love Nick Collison, and as much as he's willing to dole out and take punishment against opposing centers, he's much more suited to play at the power forward position. The addition of Gortat would give Nick the chance to play his more natural position more often, and the Thunder will still be able to take some pressure of Krstic by throwing Gortat out there as his tag-team partner, so to speak.

He's also another one of those prototypical Sam Presti type guys that will fit in well with the rest of the group. He's got a positive attitude, is a hard worker, a team player, and is a solid defender. The improvement he made from his Rookie NBA season to this season may be attributed to having Dwight Howard as a mentor, which is easily one of the best you could ask to have as a center looking to improve. After all, Dwight seems to be the "IT" guy nowadays in terms of what teams are hoping to get when they draft some of these young 7 footers. Anybody who followed this team before the move to OKC can attest, that's not exactly easy to find. Now, don't get it twisted either, I'm not saying that this guy is going to play like Dwight either, just saying it doesn't hurt that he's been able to learn and grow behind one of the best around.

If for nothing else, just compare him to Robert Swift. Are there any Thunder fans out there that question whether or not Gortat would be a MAJOR upgrade over swift? I didn't think so, and if there are, they probably need to go have their head examined. As a matter of fact, send them over to my office, I've got a nice slab of concrete I can slam their head into for awhile until they regain their senses. Gortat has tremendous upside and should be able to be brought in for a marginal price, he's certainly not going to be fetching a huge contract unless Howard goes down in the playoffs and Gortat suddenly turns into Superman and leads them to an NBA Finals victory and becomes the finals MVP. In that situation, he may not be our best option because the price would skyrocket, but look, that's just not going to happen now is it? No.

Bottom line, he's a good character guy, a big body, a defensive minded team player who can grow and improve with more minutes and should be pretty productive in a lineup that is in serious need of an identity inside. It could be the perfect match. If he were to sign and get say, 20 MPG, I think he could average 8 points and 8 rebounds per game and be pushing for a double double almost every time out. That's not to mention that he could up his blocks per game, anywhere from 1.5 to 2.5 with that kind of increased and sustained playing time. He could end up being a very nice fit, and more than fill the shoes left by Robert Swift. What do you guys think about Gortat? What do you think about him in Thunder Blue next season?