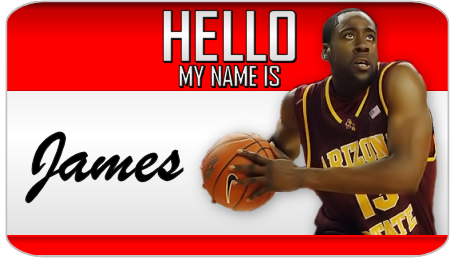 Hello, my name is James Harden. I've been working hard trying to improve and impress scouts as we get closer to the 2009 NBA Draft, where I'm fully expecting to be a top 5 selection. I came across the article that Hasheem Thabeet wrote last week (Hello, My Name is Hasheem Thabeet) right here at WTLC, and because I feel like Oklahoma City is the best fit for me, as well as the highest spot I'm likely to be selected, I felt it only right that I should be able to write my own article and tell you why James Harden should be the Oklahoma City Thunder's #1 pick in the 2009 NBA Draft. I've also since been informed that Hasheem Thabeet didn't really write the article last week, but that it was written by WTLC creator/founder, Mr Pappagiorgio.  Although, that's beside the point now because I've been inspired to plead my case as well...even though this is also being written by the same writer and not actually James Harden. Come on guys, I've said it before, and now for the rest of the article, get back to suspending disbelief.

First of all, I believe that not only is Oklahoma City the best fit for me, but that I'm the best fit for the Thunder in this draft. By drafting me the Thunder can rest assured knowing that they have filled out their backcourt for many years to come. I believe I can provide a lot of what this team is missing from the backcourt. First and foremost the Thunder need that go-to guy they can pass the ball out to for a spot up 3 pointer. I'm that guy, and although I'm not nearly as great at the longball off the dribble, in a catch and shoot situation, you aren't going to find anyone better than me in this draft. With Kevin Durant and Green at the forward positions, along with Westbrooks uncanny ability to drive the ball, at times, with ease, finding me open on the perimeter for a catch and shoot 3 pointer should become a regular occurrence. This team has so many offensive weapons, that even if teams start to make attempts at shutting me down from the outside, there will always be enough other threats to get the ball to/take attention away from me.

I'm also a Sam Presti type character guy, how many times have I read that on this site anyway? Too many, most likely. What? Are you surprised that a top 5 NBA Prospect such as myself, James Harden, is a regular reader here at WTLC? Well you shouldn't be, because this is where I want to play. I'm very unselfish in my play, and I do whatever my team needs me to do in order to win. I'm also very knowledgeable about the game, I have tremendous court vision, and I believe I am a tremendous facilitator of offense, and to put it simply, I'm a playmaker. My athletic ability has  been called marginal, but I believe its afforded me enough to develop a variety of shifty moves that will allow me to get passed defenders in one on one situations, even though I don't have great quickness. I create mismatches against most defenders, and I'm not afraid to body up a defender with my back to the basket. I guess what I'm trying to say is that I'm extremely versatile and effective on the offensive side of the ball.
I'm very well rounded defensively as well, which is something I know this team puts a tremendous focus on. On top of that, I'd have one of the best defensive shooting guards in the league to be mentored by, in Thabo Sefolosha. I have solid footwork, I stay in position well, I have quick hands, and overall I have pretty good anticipation skills. Playing for the Thunder and working alongside Thabo, could elevate not only the level of my personal game defensively, but will make me a tremendously better overall player, and allow me to contribute to this team on both ends of the court for many years to come. If I can grow as a player defensively during my first few years in the league, I believe that the combination of myself and Russell Westbrook will become the leagues very best tandem of guards in terms of overall play (offense & defense).
I know Sam Presti will have options at the #3 position because either Ricky Rubio or Hasheem Thabeet will still be on the board, but if Rubio is gone, I still think I'm the guy for this team. Thabeet, although bringing that tremendous size and solid defensive ability to the Thunder is enticing, he is still a very raw player and will need quite a few years to develop into the type of player that he's projecting to be (Dikembe Mutombo). I feel like he will take years to develop, and even then, its still a 50/50 chance on whether he'll be a productive center in the NBA. If you take me instead of Thabeet, you're getting a guy who can come in and produce immediately, and will help round out the backcourt of the future. Also, even though you would be passing up on Thabeet, you'd still have the opportunity to go after (and sign) guys like Marcin Gortat, Chris Andersen, Big Baby Glenn Davis, and a few others who can come in and help this team on the inside.
Just like Thabeet, drafting me would allow the team to stay in tact, as its been built with Westbrook at the 1, Durant at the 3, and Green at the 4, while plugging me in and the 2. Westbrook, Harden, Durant, Jeff Green, (Future Center) is a lineup to be feared for many years to come and depending on who fills that 5 slot in the future, this Thunder team will be competing for NBA Titles in just a few short years, and for many years to come. I'm your guy, draft me, you won't regret it. My name is James Harden, and I'm the #3 overall pick in the 2009 NBA Draft selected by the Oklahoma City Thunder.
If you're still not convince about me, check out some of my stuff on Youtube below:
***This post not actually written by James Harden***