Share All sharing options for: Breaking Down The Statistics: Chris 'Birdman' Andersen 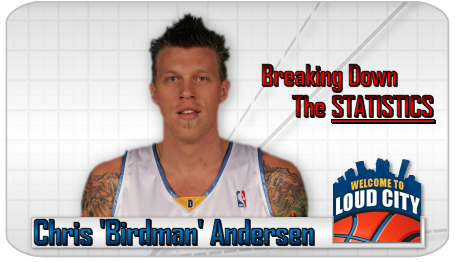 Andersen, a 30-year-old bench player who was suspended from the N.B.A. in 2006 for two years because of drug use, is an unusual cult hero and the unlikeliest of role models. But the stands are sprinkled with small children wearing headbands and spiked hair, men dressed in yellow feathers, and people of all ages wearing "Birdman" T-shirts or the hot-selling No. 11 jersey.

Chris Andersen, aka "Birdman", has made quite the comeback in the NBA this season after signing a relatively small one year contract with the Nuggets for just under $1 million. He has since exploded onto the scene, finishing second in the NBA with 175 blocks behind only Dwight Howard, despite only getting about 20 minutes per game (playing about 42% of the game).

His impressive statistics this season don't just stop there. He averaged 2.46 blocks per game (2nd in NBA), had a defensive rating of 100.6 (8th in NBA), and he had a block percentage of 9.3% (1st in NBA). A block percentage basically just means the amount of opponent field goals that the player managed to block - but it's based on an equation in order to estimate.

The playoffs this year have been even kinder to Andersen. He's kept up a similar defensive presence, while having vastly improved offensive performances. His true shooting percentage in the 2009 playoffs has been 0.656 which is well above his career average of 0.531. Additionally, he's been scoring at a rate of about 1.37 points per possession (PPP, for possessions that the player used) which is an absurd pace when you consider that LeBron is at a 1.31 PPP clip.

The question is, can Birdman keep this pace, and will he be worth whatever price he commands in free agency? The answer is after the jump!

First, let's take a look at Chris Andersen's career averages to gauge what kind of a player he is. He's played in 329 career regular season games and logged 5692 minutes in those games, so we have a reasonably large dataset to analyze.

Andersen has generally logged between 15 and 20 minutes per game, and as such typically gets between 1.5 and 2.0 blocks per game. This will always put him near the top of the league in terms of shot blockers, and over his career you could argue that he has been one of the premier shot blockers in the league. He's also a fairly efficient offensive player because he understands his role and tries to score around the basket, a lot of the time on offensive rebounds.

However, his statistics get even better when you discount the 2005-2006 season and 2007-2008 season when Andersen played a very limited amount due to his troubles and suspension. He was not very effective in those years. The two years that bookended the 2005-2008 timeframe were his best seasons as a pro. Let's take a look at his averages from those years:

Basically, Andersen spent his first couple years not being used a whole lot in Denver as a rookie and a second year player, only getting about 14 minutes per game of playing time. After having adapted to the league over a couple years, Andersen played one more season in Denver, getting his PER up close to the league average while still only logging about 14 minutes a game. Evidently that wasn't enough for Denver to hang on to him, and he went to the Hornets.

His fourth season was a "breakout year" in New Orleans. His playing time increased to about 21.3 minutes per game and he had his most efficient year to date with a PER of 18.5. This was the first year that I used in my statistics averaging above. After that, he basically spent 3 years on the shelf, but he has basically picked up where he left off, posting similar stats this season in Denver. If anything, his defensive effectiveness increased this year.

What does this suggest? Well, Andersen is in the prime of his career, or perhaps beginning to enter into the latter half of the bell curve. It would have been really amazing to see what Andersen could have done if he got to play more in those years that he sat on the bench or was suspended.

For next year, whichever team decides to sign him will likely be getting production similar to what he's putting up in Denver this year - about 7 ppg, 6 rpg, 2 bpg in about 15 to 20 minutes per game as an "energy guy" or roleplayer. The only year that he earned more than $1.6 million was after his "breakout year" in his first season with the Hornets. His second year with the Hornets he pulled down $3.5 million. His price came down quite a bit after his suspension, and now he's earning around $1 million. I would expect that after his phenomenal season this year, and the way he's making a name for himself in the playoffs, that he will probably command more money - between $2 and $3 million.

I suspect Andersen will be a productive role player who can patrol the middle and won't break the bank in the process. However with many teams fighting the NBA salary cap, the Thunder could have an inside track at nabbing Andersen if he decides to listen to all free agent offers (aka not stay in Denver for a discount). Whatever team gets him can probably expect to pay him on average around $2 million a year and get an above average player. That's more than you could say for a lot of the Thunder bigs. He's 6'10" and can play some center. As a matter of fact, his PER is much higher as a center (21.5) than a power forward (17.9), he just logs the vast majority of his minutes at PF.

The biggest question seems to be whether or not Andersen could transition to becoming a starter, something I'm sure the Thunder would desperately welcome at the PF position. It's really hard to project that, since he's always been kind of a role player. He only logged over 30 minutes in 2 regular season games this past season. So in order to take a look at any possible trend, I created the following chart: 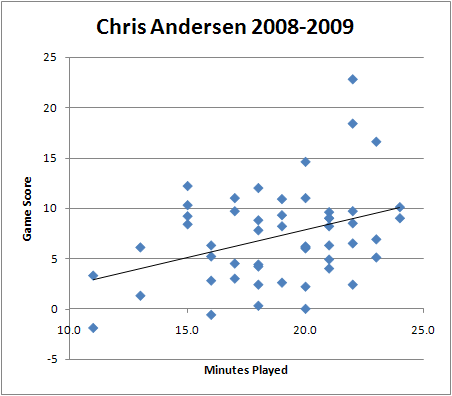 As you can see, the trend is weakly correlated, but correlated nonetheless. The more minutes Andersen plays, the more productive he is. However, there aren't really any samples of  "starter type minutes" to project out that far. Important things that I found:

It is encouraging to see that Andersen's production doesn't follow a parabolic trajectory with decreasing productivity when he logs more minutes. This means that he could have some potential as a starter. Of course, you would have to weigh that against the possibility that he really is just best suited as a 20 mpg energy guy who could wear out over a long season if he played 10 more minutes per game. This means that he could expect to play about 700 to 800 more minutes in a season.

One thing, for sure, is that Andersen would be worth signing in the offseason, and the Thunder have the flexibility to get it done. At the very least, I think he could split time with Collison at PF and form a pretty good tandem there.