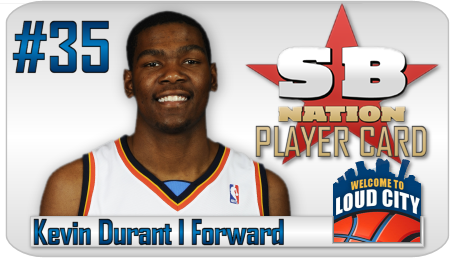 As I began preparing to write this article, I started to wonder, wow, how many great things are there to say about Kevin Durant in a single post? Then I got to thinking, you know what, a more interesting question is how many BAD things can you say about Kevin Durant in a single post? Honestly, not very many, but over the course of this EOS, I'm sure you will see at least one, possibly two. Hey, we wouldn't be doing the blog justice if we just sang the kids praises without pointing any negatives out right? Right, so here we go, the final EOS Evaluation for the 2008-09 season, Kevin Durant.

If you ask any Thunder fan whether KD is the next great superstar in the NBA, you'll get a unanimous answer, YES. For fans who have watched this team all season long, one thing is clear, Kevin Durant is amazing and well on his way toward becoming the next big name in the sport. I really don't feel stupid at all throwing his name up there against guys like Kobe Bryant, LeBron James, Dwyane Wade, or anyone else who is widely regarded as a top name in the sport. He may only be two seasons into his career, but he is already well on his way to superstardom. I don't think you even need another example outside of what the kid did during All-Star weekend. In case you weren't paying attention, Kevin won MVP honors for the T-Mobile Rookie Challenge and Youth Jam (click the link for some great pics) during All-Star weekend, and even set a record in the process by scoring 46 points (Game Record) during the game. Of all the great talent involved in the game, which included guys such as Derrick Rose, Eric Gordon, Michael Beasley, Brook Lopez, O.J. Mayo, Greg Oden (DNP Injury), Rudy Fernandez, Al Horford, Rodney Stuck, Thaddeus Young, and our own Russell Westbrook, and Jeff Green, among many others, Kevin Durant stood head and shoulders above all the rest. As if that wasn't enough, he followed that performance up by winning the first every H-O-R-S-E competition.

Kevin has been receiving a lot of love out there when it comes to the most improved player award, and when you look at his stats, its hard to argue. Now, Kevin had a tremendous rookie season, good enough to win Rookie of the Year honors, so being regarded as the most improved player in the NBA this season is not only a huge honor, but a huge step in his development towards becoming one of this leagues premier players. As far as the stats go, he played 5 more minutes per game, improved his shooting percentage by 4.6 points, improved his 3 point percentage by a whopping 13.6 percentage points, improved on steals by one third of a steal per game, had nearly 2 rebounds per game more than last season, had almost half an assist per game more, and 5 more points scored per game this season as compared to last. That's some pretty impressive improvement, and becomes even more impressive when you look at just how great his rookie stats were.

There is no question, at least in my mind, that Kevin Durant will be the scoring champion in the NBA within the next few years, and will be in the top five in scoring for many years to come. He scores seemingly at will, and when he starts feeling that sweet stroke, he's nearly impossible to stop. His length at 6'9" gives him an advantage against nearly any small forward in the league, and on occasion when he plays the 2, its almost not even fair to the competition. He can shoot over anybody, and as much as teams focus on defending him, expect to see teams start paying even more attention to defending him than they already do in the coming years.

If you had to say anything negative about the guy, it probably leans toward one of two things. The first and most obvious one is his size, not height, but his frame, and the fact that he only weighs 215 pounds. At 6'9" he definitely has the height to create mismatches, but his frame will make it difficult for him to develop any sort of  dominant post game, and make it hard for him to be a guy who can consistently push for double digit rebounds. The second thing is his defense, which at times, has left a bit to be desired. When you look at the major defensive stats though, he's pulling in 5.5 defensive boards per game, averaging 1.3 steals per game, and blocking .7 shots per game. So its not that he's not active defensively, its just that he's not nearly as good on the defensive end as he is on the offensive end.

Overall though, he is the future of the franchise, the face, the guy that no matter what, the Thunder will have to do everything in its power to keep in Oklahoma City for the long term future. Despite only having played one season here so far, its hard to imagine the Thunder without Kevin Durant. That's how much of an impact he has made on this team, city, and fans in his short time here. He's the guy that fans can latch onto and say, yeah, we might have only won 23 games this season, but we've got Kevin Durant, and he's going to lead us toward being title contenders for many years to come.

I've added some videos below the EOS links as well for your viewing pleasure. :-)