Share All sharing options for: Thabeet "Key" For Thunder At 2009 NBA Draft...In More Ways Than One. 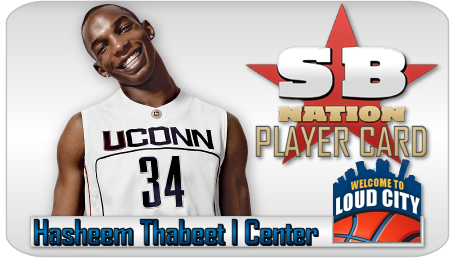 The more I think about this upcoming draft and what we will do with the #3 overall pick, the more and more I have begun to convince myself that Hasheem Thabeet is the key to what the Thunder will do come June 25th. His availability will determine whether  the Thunder will make a selection with the 3rd pick, proceed with a "draft and trade" (trade up), or trade down. His size, work ethic, character, and defensive prowess, combined with our lack of an identity on the inside make him the slam dunk choice for the Thunder should he be available at #3. Now a lot of fans will scoff at that remark, and plenty of you are also out there throwing around the Robert Swift and Mo Sene failures as examples of why not to draft the guy (hey I'm as guilty as anybody), but in my opinion, there isn't a bigger hole on this roster that needs filled, especially for the long term, than center.
This draft, seemingly everyday, is touted as having two top players, and then everyone else. If Rubio and Griffin both come off the board at #1 and #2, the Thunder should and will select Hasheem Thabeet. This is the simpliest scenario out there, and sometimes, the simple scenario ends up being the one that gets played out. So its quite simple, in this bloggers opinion, if Thabeet is available at number 3, Hasheem will be wearing Thunder Blue next season. Of course if he isn't, that means Ricky Rubio Is (available)...and that's where things get interesting.

Ricky Rubio of course is the flashy young point guard from overseas who has been playing professional ball for four years, and has a ridiculously large buyout of $8 million/season that he must pay for the right to play in the NBA before the end of his contract. This has inevitably lead to rumors coming out that he will only come to the NBA if he is drafted by a large market team. Now while he's a terrific prospect and would be a great addition to any team (including the Oklahoma City Thunder), his VALUE to other teams may be so great that the Thunder find themselves unable to pass up trade opportunities that may be floated their way.

In terms of trading the #3 pick, the Thunder should have a multitude of options and deals at their disposal to choose from. First and foremost they will likely make the call to the Los Angeles Clippers and see what they want packaged into a Griffin for Rubio deal. This is the only scenario in which I see the Thunder losing the upper hand in any negotiations for a draft day trade deal. However, if the Clippers insist on packaging either Russell Westbrook or Jeff Green, the Thunder should go ahead and start looking at trade partners below them. Its because of Rubio's value to other teams that the Thunder shouldn't spend too much time trying to work a deal with the Clippers if they are insistent about Green/Westbrook being part of the deal.

Should the Thunder choose to move down, they will have any number of teams to choose from as Rubio's rights are highly coveted, and with the top 3 players off the board, the 4th overall pick isn't supremely better than any other pick in the top 10. Sure each pick is progressively worse, but the level of talent is pretty consistent. The Thunder will have to decide an alternative player in the draft that they want if they trade away the third pick, and figure out which pick he's most likely to, no longer, be available, and then look at all the teams before that pick as trade partners. Once that's done, start looking over those teams rosters and see if there is a capable big man that a team might be willing to part ways with to get their hands on Rubio. This way the Thunder can add a veteran big man as well as a young guard. If you read my post a while back "Worst Case Scenario" I suggested the Thunder draft Ty Lawson. While trading away talent like Rubio may not be ideal, if you can get a productive piece in a trade and add a guard like Lawson to compliment Westbrook, you have the beginnings of a team that could be competing for a playoff spot as early as next year. This is also not to say the Thunder couldn't decide to trade down only a spot or two and do the same thing and get their hands on an even more highly touted guard than Lawson, perhaps James Harden?

What I'm trying to say here is, Hasheem Thabeet is the key. If he's available at #3, you might as well take him because trading down isn't likely to net you nearly as much value as if we had a pick that guaranteed us either Rubio or Griffin (which would be much more sought after than if those guys are gone). On top of that he's probably the best overall fit for the team anyway. If he's not available at #3,  that means the value of our pick has skyrocketed as teams begin to salivate over the oppertunity to trade up and nab Rubio. So much so the Thunder could find themselves with yet another puzzle piece to go with their draft choice, or possibly a puzzle piece and 2 draft picks. Who knows, Presti gets value out of nothing, imagine if he had Rubio as a barganing tool.