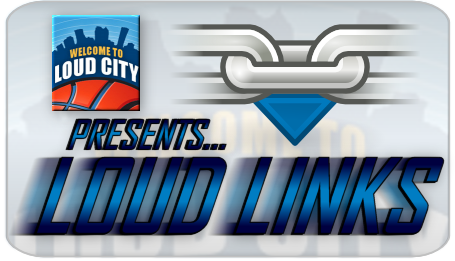 As Welcome to Loud City continues to grow in readership and member activity, we're striving to become your one stop hub for all things Thunder when you get up in the morning and start browsing through your daily blog bookmarks, news sources, and entertainment readings. So with that in mind, we're going to be bringing you Loud Links on a daily basis (or as often as needed). Loud Links is similar to something we used to do called "The Thunderoll" back in the early days of WTLC and before that, over at Thunder in OKC. The main difference here is the links will focus on Thunder specific articles, and links that relate is some fashion or another to things that our readers and Thunder fans will find interesting and entertaining. Of course, we'll still be bringing you our own regular content as usual, but now you'll have quick access to other great articles around the net as well.

Today is just a test run, and the series will pick up either sometime later this week or next week before running on a full time everyday basis. We just wanted to go ahead and introduce the idea, and give you a taste of what Loud Links will be bringing you on a daily basis. So without further ado, the very first edition of Loud Links...

With No. 3 Pick in Hand, Draft Process Continues

By CHRIS SILVA | THUNDER.NBA.COM Posted May 20 2009 3:05PM
"This is definitely a great position for us to be in," Presti said. "I think we’ll definitely get some phone calls and we’ll have some options. We also like the group of players who will be there. I’m excited because this is a fun time of the year for the organization … having a chance to pick third only puts some momentum behind what we’re trying to accomplish in Oklahoma City."

By Darnell Mayberry | NewsOK.com Published: May 22, 2009
But the Thunder is in the process of scheduling workouts with all the players it is considering with the third pick in next month's draft, including Rubio. The Thunder has not encountered any issues with Rubio or his representatives regarding playing in Oklahoma City, contrary to a report on the Web site Draftexpress.com.

By Multiple | NewsOK.com Published: May 22, 2009
Should the Thunder GM Sam Presti trade up, trade down or sit tight at No. 3? Who should OKC take? In its first NBA offseason of its own, Oklahoma City is getting its first experience with predraft speculation. Columnist Berry Tramel and John Rohde offer their coping advice on The Press Row video.

By Chad Ford | ESPN.com Published: May 21, 2009
A number of GMs continue to insist that the Clippers want to move Baron Davis and might be open to moving the pick to Memphis or Oklahoma City if either is willing to take on Davis' contract as part of the deal. Both teams will have the cap room this summer to make it happen.

By Chad Ford | ESPN.com Published: May 20, 2009
Chad Ford's version 1.0 of his own mock draft has the Oklahoma City Thunder selecting Ricky Rubio with the 3rd overall pick after the Clippers take Blake Griffin, and the Grizzlies take Hasheem Thabeet.

By MURRAY EVANS | Yahoo Sports | Associated Press Writer May 15, 5:27 pm EDT
"I don’t know of any athlete at Oklahoma or any place else who was more loved by the fans who knew him than Wayman Tisdale," said Billy Tubbs, who coached Tisdale with the Sooners. "He was obviously, a great, great player, but Wayman as a person overshadowed that. He just lit up a room and was so positive."

Blake Griffin Workout at the NYAC

by: Jonathan Givony | Draft Express | May 22, 2009
"Definitely," Griffin responds, when asked whether he sees the 18-foot jumper becoming a major part of his repertoire in the future. "That’s something I’ve been working on for the past two years. I’m really dedicating myself to it. A lot of people say they haven’t seen me shoot outside of two feet, or dunking the ball, but it’s there, and I’m going to use it, and I’m going to keep working on it until it’s one of my main weapons."

How to Read Chad Ford (And Other Draft Experts)

by Ziller | Sactown Royalty | May 21, 2009 8:14 PM CDT
Anyone who has read Ford the past few years knows he is not the best basketball analyst. He has touted the skills of numerous blatantly unskilled players, Darko Milicic being the most infamous example. Ford has a poor grasp of team needs, and frankly he seems to fail to understand the vagaries of NBA analysis in general. There are times when Ford can say something about a team's or NBA player's performance that is completely wrong. He has done this with the Kings a number of times. He fundamentally misjudges the NBA often enough for it to be noticed, discussed, and parodied.