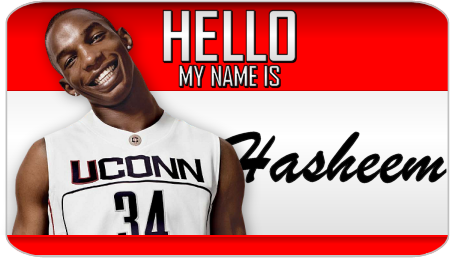 Hello, my name is Hasheem Thabeet. I'm 7'3" tall and I like to block shots like you can't even imagine. Defense is the name of my game, and I'm prepared to become the dominate force on the inside for the Oklahoma City Thunder, which will ultimately lead towards winning an/multiple NBA Titles a few years down the road. Now, I know your organization has had a long history of failed Centers, but all of those were acquired in Seattle, and the move to Oklahoma City was not only a new beginning for the franchise, but a chance to start over in terms of finding a long term solution at Center. I am the man for the job, and over the course of this post, I'll do my best to convince you that I am not to be compared to the likes of Robert Swift, Mo Sene, and Johan Petro.

First and foremost, you'll notice that I have something extremely valuable that none of those guys have, 3 Years of Collegiate Experience. During my time at UConn, I played in 100 collegiate basketball games, which included over 30 games during each of my three seasons playing college ball. During those three years I saw steady improvements in points, rebounds, steals, and blocks per game (although blocks dropped from 4.5 to 4.2 per game from 2nd to 3rd year). I'm also widely regarded as a top 5 pick, and although others say I wouldn't be during most drafts, I beg to differ. A player of my size and talent is something that most NBA teams only dream of finding, and if I came out next year, I believe I would still be a top five draft pick, but honestly, another year of college ball might even propel me higher. But I'm ready now, and that's something that Robert Swift, Johan Petro, and Mo Sene weren't able to say before their respective draft years.

Robert Swift was drafted straight out of high school, Johan Petro was an overseas player drafted without any college experience, and the same can be said for Mo Sene, who, as far as I can tell wasn't drafted at all (To be honest, I don't remember how the Sonics brought him in). Sure there are a few guys out there who are just studs and were capable of making the jump to the NBA without spending any time at the collegiate level, but those guys are few and far between, and all three of the guys mentioned above would have benefited tremendously from multiple seasons in the NCAA.

But enough about them, what about me? What makes me so special? Well, in case you already forgot, I'm 7'3" tall and tip the scales at a little over 260. Would you want to beat and bang around in the post against that frame? I didn't think so. I'm currently weighing in at 268, and would like to be around 275 by the time the season rolls around to add a little bit of strength. My size obviously makes my presence hard to miss on the defensive end. I block shots like crazy, and do a good job keep opposing centers from being effective in the post. In addition to shot blocking, my size gives me a tremendous advantage on the boards as well. I averaged over 10 rebounds per game last season, and believe I possess the tools necessary to be a 10+ RPG center throughout a significant portion of my NBA Career.

I also am planning on finishing my schooling over the next couple of summers, as bettering myself off the court is very important to me. I fit the mold of the type of player that Sam Presti likes, and that this team is being built with. I'm a hardworking, unselfish, defensive-minded player, who will not only continue to progress on the court, but off it as well. I'm another one of those "high character" guys that Presti likes so much, and believe I'd fit right in with the other young guys on this team, like Kevin, Jeff, and Russell.

Speaking of Jeff, another big reason the Thunder should go ahead and Draft me is that it will allow them to continue to let Jeff Green grow and develop at the power forward position for this team. His lack of size, and style of play is probably better suited for the small forward position (where we are keeping Kevin cemented at), but with me hanging around in the middle, there won't be as great a need for another big body down low. Essentially you won't have to move anybody around, and will be able to keep the team intact as it was this season by drafting me. Russell can continue to develop his game at the point, Jeff can continue to grow at the 4, and Kevin will surely be on his way to an all-star appearance. Of course there is the issue of Nenad Krstic, but I like Nenad, and I think we compliment each other quite nicely. It will throw opposing teams off when we switch in and out because our style of play is so much different.

I can't finish writing this without being totally honest with you either. I do have some work to do on my offensive game to become a better scoring threat. I am working on my footwork this summer, and trying to become a better scorer. I only averaged a little over 13 points per game last season, and that was against college players, most of which were vastly undersized compared to me. That's something that won't be the case on a nightly basis in the NBA. Over the course of my rookie season though, I don't think there is any reason I can't average somewhere around 8-10 points per game if I'm given around 30 minutes of playing time. But I think that is an okay number when you have guys like Durant, Green, and Westbrook on the court as well.

But even if my offensive game has a lot of work to do, playing for Oklahoma City would be the perfect fit for me because this team has so many other young scorers. Kevin Durant is going to score 25+ points every night, and Jeff Green will probably be pushing that 20 point per game mark next season, and that's still not even mentioning Russell Westbrook, who also might be pushing that 20 point per game mark next season. So right there you have approximately 65 points per game, and if I can add 10 to that, we're at 75 points already, and that's not even included the 4th starter, and any bench players. So playing for the Thunder will allow me to continue to grow offensively without much pressure while at the same time be given the full reigns to be able to do what I do so well on the defensive end. Because of all the other scorers on this team already, I really don't think there is a better fit for me amongst the other teams that will have the opportunity of drafting me.

So I know everybody out there in Oklahoma are worried about me being the next Robert Swift, or Johan Petro, but really you shouldn't be. I'm cut from a different mold than those guys, and I have three years of College experience to back that up. Each year I have improved my game, and become a better player, and I believe I will continue to do so for many years to come. I think I am a rather large piece of the puzzle that Sam Presti is trying to solve by putting the right group of players together as the Thunder rebuild for the long haul.

Thank you so much for reading, most sincerely,