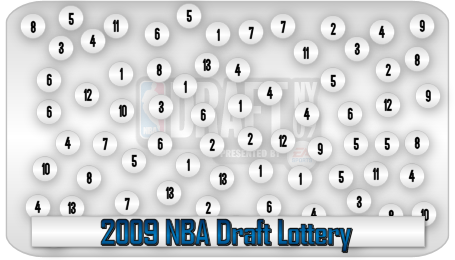 Well folks! This is it! The moment of Truth is upon us, and the Oklahoma City Thunder will be involved in their first ever NBA Draft Lottery selection show tonight at 7:30pm Local Time on ESPN. NBA Shootaround is set to start at 7pm Central time as well, which should make it well worth watching, so I fully recommend clearing your schedule between 7pm and 8pm CT and tuning into ESPN to see where the Thunder will be making their first selection in the 2009 NBA Draft, which is coming up in late June. Of course keep your web browsers opened to this post, so you can join in on the post-lottery, knee jerk reactions, that are sure to follow.

After the selection show is over we will have a much better idea as to who might be the next rookie player joining the Oklahoma City Thunder. Of course that will be a little bit more/less difficult to determine depending on where the Thunder end up. If they get the awarded the top pick of the draft, we'll go ahead and announce that with the first pick in the 2009 NBA Draft, the Oklahoma City Thunder Select: Forward, University of Oklahoma, Blake Griffin! Whereas, if we wind up with say, the #6 pick, the guessing game will begin as to who teams in front of us will wind up taking, then determining the best fit for our ballclub. Currently we're slotted in at Number 4 overall, and sliding backwards wouldn't be the end of the world, but the impact from getting one of the top 3 picks in the draft as opposed to sliding backwards is night and day in terms of immediate impact from the player. Take the leap to see the odds if you haven't been following the last few weeks, and join us here live to comment in this thread before, during, and after the 2009 NBA Draft Lottery. Should be fun! 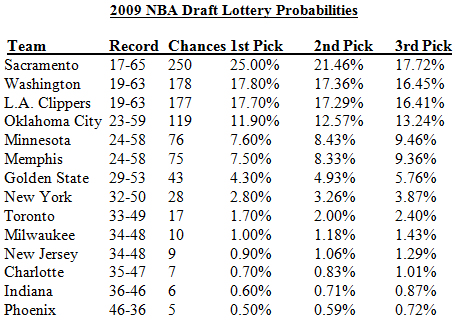