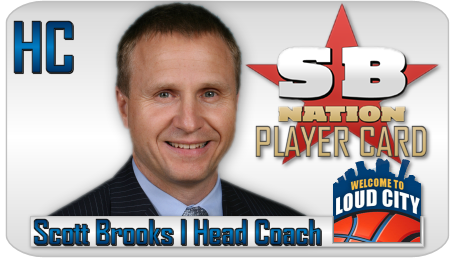 The Oklahoma City Thunder announced the other day that the newly installed, full time, head coach of the Thunder, Scott Brooks will be representing the team at the 2009 NBA Draft Lottery. So today we'll take a few moments to discuss the choice, as well as see who other teams are sending to the 2009 NBA Draft Lottery to represent their respective organizations. Last season, the Seattle Sonics chose to send Rookie Sensation Kevin Durant to the Lottery to represent the team and bring home the #4 overall pick in the 2008 draft. Perhaps the Thunder are hoping for some beginners luck in sending the first time head coach to the lottery with hopes of improving its current position of the number 4 overall pick.
Another interesting tidbit is that the Thunder are sending more people to the Draft Lottery than any other team (According to the release below), excluding the New York Knicks. In total, the Thunder are dragging along 8 people, 2 of which are prize winners who won their chance to be a part of the lottery thanks to contents ran by the organization. Pretty cool to see our team doing something that no other team in the league is doing with the lottery...getting their fans involved and making them a part of it. Its no surprise that the Knicks would send the most being as they are located in the same place as the Lottery so there are no extra expenses as far as travel and accommodations that other teams would have to deal with. The Knicks are sending 10 people to the Lottery this season.

In case you were wondering who the Thunder were going to have locked down in the actual Lottery Room, it will be, of course, our young general manager, Sam Presti. So if you are looking for any visual reactions from our general manager when our pick selection is announced, you are not going to see it since the lottery room participants are sequestered in the Lottery Room until the selections have been announced on Live TV. Can you imagine what will be going through his head during the time he's locked down in that room after the picks are announced? Seriously these guys will be locked down for a good hour or so before they are allowed to leave. Kind of makes you wonder if these guys are already discussing possible trades / draft day deals while they wait.

As for the Thunder sending Scott Brooks, I think its a pretty good choice. The players all seem to really love the guy, and he's already won over most of the fanbase and is a pretty beloved coach already in Oklahoma City. When the Thunder finally removed the interim tag and made him the official head coach of the Thunder going forward, I don't think I saw a single negative thing said about him in any print media, web forums, or blogs. Perhaps I just don't do enough reading, but I honestly don't remember anything negative.

Also, I'm not sure if the list below is complete or not, because some teams don't have any lottery room participants listed, but this is the official listing the NBA is handing out to the media, so one would expect it to be pretty accurate. Kudos to the Thunder for being the only team bringing some fans along for the ride as well. Would have been even cooler if they'd given the prize winners the opportunity of representing the team instead of Scott Brooks. Nothing against Scotty of course, but how cool would it be to see our team up there represented by a fan? Pretty damn cool, perhaps the Thunder will keep that in mind for next season...that's if we are still a lottery team by then.